Ever since Mortal Kombat and Night Trap helped create the age rating system we know today, there’s always been this stigma around videogames.

“Videogames Will Corrupt the Minds of Children and Turn Them into Criminals Later in Life.”

You’ve heard that type of thing somewhere, either from someone you know or on the internet. And this is a tired and archaic view of videogames. However, when I look up on Google “videogames don't cause violence” I get 40,900,000 results and articles about the research going into them as recently as 2020 that has proven time and time again that that claim above this paragraph is false.

And yet, I can only assume that they will continue this research regardless of previous results.

Now, I’m not trying to prove that videogames don’t cause violence. There are much better articles than this that go into detail about the correlation between violence and games. We’ve been killing each other since we could tie rocks to sticks and there are people who have taken their games too far like stabbing someone in real life over getting killed in Counter-Strike (here's the link for the morbidly curious). It’s quite obvious that those people weren’t in good places mentally and needed help before they caused tragedies - but the media made the world think that videogames were the main cause despite research suggesting that it actually decreased criminal activity since criminals and people more prone to anger would rather spend their time inside. A Counter-Strike: Global offensive knife. Worth way too much money and has surely caused a rage quit or two.

Why are videogames blamed for violence? Why are videogames considered a problem by people who don’t necessarily understand that, like television and music, it's a valid source of entertainment and a form of art?

It’s not like a painting on a wall or a book you can read. You can interact with your source of entertainment, put yourself into the shoes of the character and make them do whatever the developer allows the player to do. Shoot, dance, walk around or kill your character in dumb ways - if it’s in the game, you can do it.

And let be specific here… it’s you.

You are the one shooting the gun, even if the player character has some detailed backstory and a face it’s still you pulling the trigger by hitting the left mouse button or trigger. Thanks to many first-person shooters, a lot of people have a rough idea of how to operate a firearm without even touching one. And that level of interactivity was scary when videogames began to become more and more realistic. From the pixelated blood of the original Wolfenstein to the near uncomfortable levels of violence in the Last of Us Part 2, we’ve slowly gotten desensitised to this level of blood and gore - and even revel in it. But even then people do have limits. Mortal Kombat 11’s fatalities are brutal and over-the-top, but made several developers develop PTSD thanks to all the reference material and some are really just too brutal to stomach. Geras’ Peeling Back Fatality is just sadistic to me and I’m sure many others. As we develop better technology and games become near indistinguishable from reality, the violence we see in games becomes more real and that may be a bad thing. 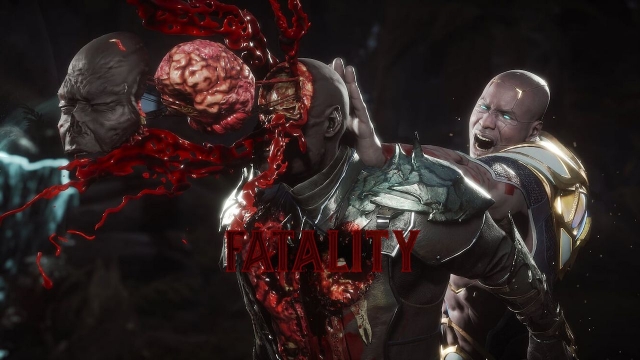 But...I can see that players still want to do the good thing.

Take the Infamous series for example. According to trophy data, a majority of players unlocked the good ending first over the evil ending. This actually went against Sucker Punch’s plans because Infamous 2’s evil ending was supposed to be the canon ending, but changed gears once they saw this data. It’s the same thing with the Mass Effect series, more players went Paragon instead of Renegade. It shows that, given a choice, players will usually pick the good choices over the evil one. Compare this to Grand Theft Auto V. If you go into a public lobby right now on its online mode, you will have a hard time surviving more than a few minutes as players just kill indiscriminately and generally cause chaos around the game’s map. Difference here is that Grand Theft Auto lacks permanent consequences to your game as long as you play by Rockstar’s rules. The game will send the police after you, but you can simply respawn or escape and they won’t recognise you even if you walk past a cop after a five star killing spree with the very gun you used in hand. If there are no permanent consequences for players, they can do whatever they want. In story driven games and RPGs, I actually dislike the ability to quick save at any point because choices in videogames no longer matter, they can simply revert to back before the choice and never deal with the consequences of said actions.

Look, I’ll be honest, I had no idea where I was going with this when I was writing this article. I just felt so frustrated that so much time and money is spent on disapproving an already disproved theory. Just seeing this article (click here) was what spurred me to write this entire thing. By this point, it’s a scapegoat for people who don’t want to face facts, like terrible parenting or dealing with mental health issues. There are much bigger problems that need to be addressed about the gaming industry than this; developers working under unrelenting crunch, the increasing monetisation of games that already cost £60 - that will either be or will soon be increased - and just the general lack of job security in the profession. EA has a graveyard of great developers that didn’t meet their quotas so franchises like Dead Space are left in limbo or dead and they’re just getting unions to help developers fight against unfairness such as firings just as a game releases so they wouldn’t have to pay bonuses. And that’s just the gaming industry - there are more problems with the world itself that needs solving soon. We have bigger fish to fry than to prove time and time again that no, videogames don’t correlate with violence.