According to… is a series where we sit down with our kids and talk about the games they/we have been playing. I’m trying to ask them different questions about the game and I’ve included some of the crazy commentary they had while playing the game as well. We’re hoping that these questions will help us to explore the potential benefits that games offer children and possibly give you some ideas on games that your kids may enjoy playing.

For this article we are playing the demo for Cake Bash developed by High Tea Frog that was available for the Summer Game Fest Demo Event. Once I saw the cute kawaii baked characters for the game, I figured Cake Bash was definitely worth giving a try! Plus it’s great that there is no cost. I’m always leery of spending tons of money on a game the boys may only be interested in for a couple hours max. I sat down with Tiger, who is nine, and his younger brother Kai, who is seven, to ask some questions and see what their first impressions were of Cake Bash. 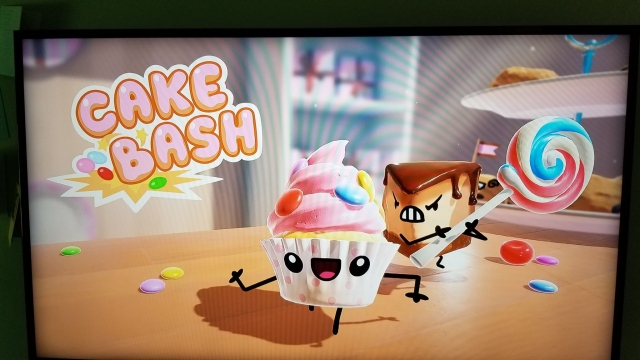 Q: What is Cake Bash?

When they started the game they didn’t bother playing the tutorial cause who needs that… So with each of the different modes it was funny to watch them trying to figure out what to do. Cake Bash supports up to four players locally, so when the boys were playing they chose the donut and cupcake characters then the bots were a blueberry muffin and a cake with pink icing. The demo has four different types of mini-games available to play, so there was lots of variety to keep them entertained.

Q: What do you do in this game?
Mini-game #1- Sweet Victory

A: You fight other treats and try to become the tastiest treat of all! (Tiger)

He’s pretty close; the cake that has the most sweeties like jelly beans wins. As the treats fight they knock the decorations off their opponents and can steal them for themselves. At the end of the first round the boys had four points each and the bots over twenty. 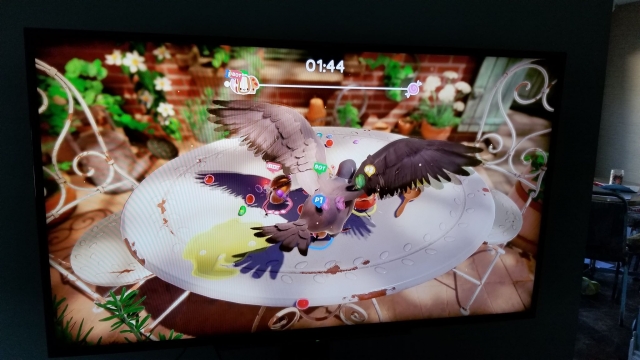 The goal of Fruity Pie is to throw the most fruit into the pie. The boys did not realize this since they didn’t do the tutorial or read any directions so instead they set off to attack the pigeon who tries to steal the fruit from you. You can’t hurt the pigeon so they weren’t accomplishing much.

“Oh no! The pigeon is coming!” Kai 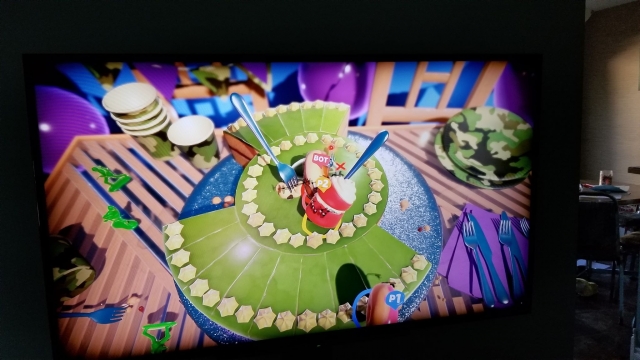 Kai was so convinced this mini-game was just like Fortnite but with treats. It’s definitely not the same or similar at all to Fortnite but ended up being the favorite mode for the boys. In this mini-game you try to avoid the cutlery flying towards you while you stand on an ever shrinking cake. Some of the funniest commentary from the boys came from this mini-game. 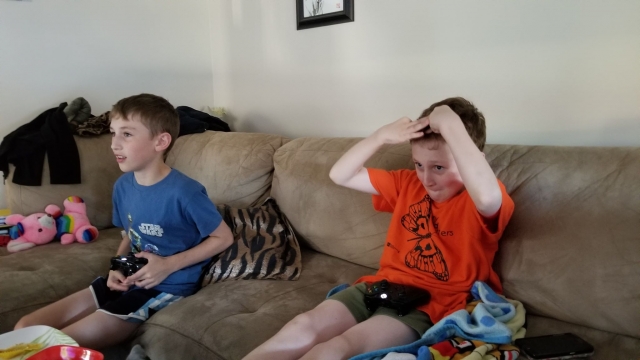 “I got shotted right in the head!” Kai says as he gets stabbed by a fork. His word, not my spelling mistake.
”I nearly almost could have gotten killed right there” Tiger exclaimed as a knife flew past him. Wow what great grammar my children have! 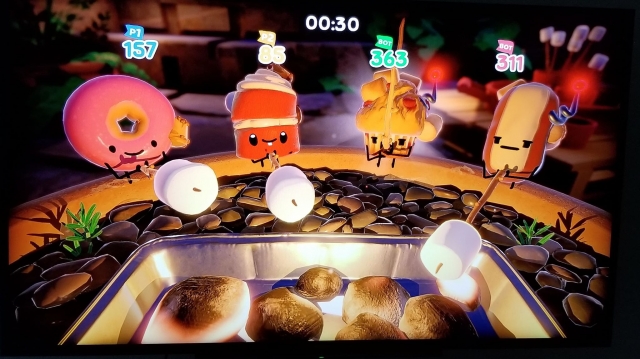 Mini-game #4- Campfire
The last mini-game available to try out was Campfire. All the treats sit around the fire trying to roast the tastiest marshmallow. The more burnt or under cooked the marshmallows are the less points you get. You definitely have to be patient which the boys find hard at times.

“Eeek oh no!” Kai exclaims as his marshmallow bursts into flames.

Q: If you could do anything in the game, what would you do?

A: Fork Knife! they both exclaimed. Apparently they couldn’t think of anything different they wanted to see in the game.

The boys both loved playing Cake Bash. Tiger said that “This is one of my favorite games now in all of history!”. “Oh no I really want a donut now” Kai said.

Now that we see that the boys obviously enjoyed this game what do I think about the game as their mum?

Q: What do I think of Cake Bash?

A: This game is a ton of fun. The characters are so incredibly cute and I love how you can customize what flavour of cake your character is and the color of icing. The mini-games are all super fun. There’s something satisfying about hitting your opponents with a lollipop. I also found the toasting marshmallows to be a very relaxing and calming game. It’s also a great party game for not only kids but adults too. The characters are all so cute it’s hard not to love them!

Q: What are they learning?

A: The games like Fork Knife are definitely helping them learn to be more observant and watch where the cutlery is coming from. The Campfire mini-game is making them learn to be patient and spend the time to roast the marshmallow to a good amount, not just jam it into the fire where it cooks super fast and burns. They have gotten good at not only going after each other and targeting the bots instead so they don’t feel as if their brother is only targeting them.

A: We have definitely played as a family a few times, but most of the time the boys just play together with the bots. It works great and the computer isn’t ridiculously good so they aren’t constantly losing.

Q: Will I let them keep playing?

A: Definitely! I love that they can play the game together and it isn’t a super violent game either. It’s quick to learn and the rounds are short enough they don’t get too crazy frustrated.

Q: Are there any negative effects?

A: The only downside is how much they want to use the Xbox now when I want to play my games and how seeing donuts makes Kai want to eat donuts.

In conclusion this game is a ton of fun! It is great no matter your age and with the variety of mini-games it will keep you busy for a long time. I’m looking forward to trying out all the other mini-games that will be available when the full version of the game releases and if there will be online multiplayer. I know my family will definitely be getting it because my kids will not let me get away with not buying it! Read the full “According to…” series
First
Prev