I love messing around with tech and recently I have been really into smart home devices, so when I was offered the opportunity to test and review the Airthings Wave device I was more than up for it.

The Airthings Wave is a device that is used for monitoring temperature, humidity and radon in the immediate environment. In order to understand what all this means, here’s a quick explanation. I’m going to assume that we all know what temperature is and inform you that the temperature-reading on the device does exactly what it says on the tin. Humidity is the amount of water vapour in the air — a higher humidity means more water, and vice versa. Humidity too high can cause mould to form, and humidity too low will result in the air being dry and uncomfortable. So we’re now at the radon section, and like most people, I had no idea what radon really was prior to looking into this device, so before writing about the device, I wanted to research into it to fully understand if tracking it would make the price tag of the Airthings Wave worth it. 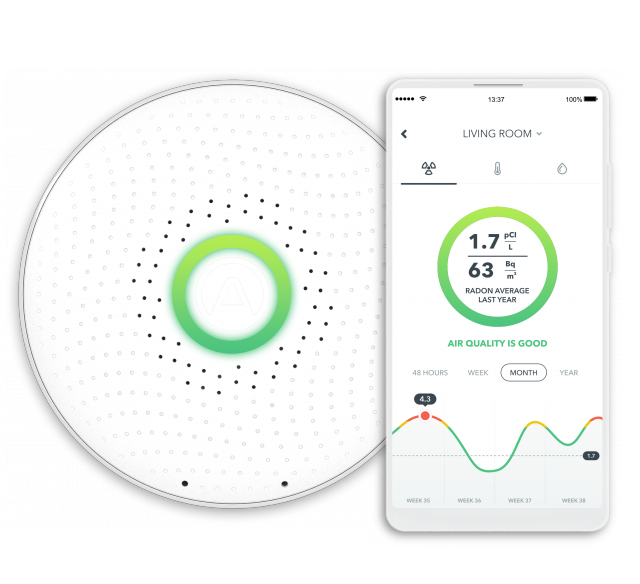 Radon is a natural, radioactive gas that is formed through the decay of uranium within rock and soil. It is colourless, odourless and tasteless, making tracking it quite difficult. When outside, radon levels are typically within safe parameters but they can collect together in enclosed spaces such as houses and workplaces. Long-term exposure to radon gas increases the likelihood of lung cancer and is the second biggest cause of it after smoking. With the present situation demanding that many of us spend a majority of our time indoors, it is more important than ever to ensure that our living environment is in the best condition.

The device is very straightforward to set up. It connects to your mobile device via Bluetooth and works with both Android and iOS via an app, which gives the average temperature, humidity and radon levels over the last 48 hours, one week, one month and one year, in a very easy format to understand. Not only this, but you can access the dashboard via your desktop if you want to see the readings without looking for your mobile device. In order to measure this data, the device must sit uninterrupted for a length of time before it can start gathering data accurately, with Airthings recommending roughly a two-week window in order for the Wave to fully calibrate to its surroundings. After this, however, the Wave can give instant feedback of these three readings — a rarity, especially for radon gas. While there are radon test kits on the UK market that you can pick up for roughly £30/£50, these typically only last around three months and must be left alone for their entire lifespan in order to accurately assess the area; the Wave has greater longevity —with an expected battery life of over a year— and can get results in a shorter space of time.

The device can offer rough feedback of its environment with a glance based on the ring light adorned on top of it. A green light means everything is nominal, an amber light means it’s venturing into dangerous territory, but nothing to worry about unless it persists. As expected, red means there’s a major issue. By accessing the app, you can acquire a deeper breakdown and analysis of this data, with specifics regarding the percentage levels of humidity/radon, as well as a viewable timeline of it. The ring light allows an easy way to keep track of your house without constantly diving in and out of a mobile app. However, there are no audible cues, such as an alarm delivered via the app or the device itself, if it detects a red-reading for any period of time, which is a shame and may put some people off.

Mounting the Wave onto the wall or ceiling has been made easy by design, allowing you to screw a magnetic plate onto the wall/ceiling and attaching the device to it through this powerful magnet. With no dangling cables and an easily accessible battery port, the Wave has the versatility to be put anywhere without becoming an eyesore or a cabling nightmare.

While the price seems a little high at first glance, the £170/$170 price tag doesn't seem that expensive when you consider the short life span of the small home tests kits you can buy. Plus with the Airthings Wave, you can simultaneously track radon alongside humidity and temperature, all while having the option of easily moving it from room to room or even to a new building to do its work.