What caught my attention when I first saw Two Point Campus was undoubtedly the incredible amount of customisation and decoration shown in the trailer. From choosing the classes to picking the wallpaper, the game seemed like a dream come true. I'm a big fan of customising and decorating; unfortunately, games don't often focus on this or — when they do — they ONLY concentrate on it, causing everything else to feel empty.

Although Two Point Campus isn't my type of game at all because it's a management sim with finances (I am terrified of bankruptcy in videogames for some odd reason), I decided to still give it a go and see if the decoration aspect would be enough to get me through the whole game. Without further ado, let's begin with the pacing of the gameplay and unlocking of the decor. Two Point Campus has some fantastic mechanics that can easily cause a snowball effect, generating way more income than you can actually spend (once you get the hang of it). Due to this, during the first campus, I found myself swimming in money quicker than I had expected. Unfortunately, I soon came to realise that the decoration items available are quite few in comparison to what I had anticipated. Thankfully, this was also due to the fact that I was only on my first campus; unfortunately (again), this also means that the decorating aspect is unlocked quite slowly. Every new campus you arrive at will have new items to unlock with Kudosh — the currency you get by completing achievements and missions — so it does get better as the game progresses. The problem arises when every new campus adds a bit more difficulty and new mechanics, making it hard to just breeze through them and unlock the good stuff.

Thankfully, there's a Sandbox Mode you can play in once you get the first star on Noblestead (the fourth campus); unfortunately, items being locked isn't the only problem with the decorating aspect of the game. Although I kept in mind that Two Point Campus is, first and foremost, a management sim, some of the mechanics made it difficult to decorate in the way I wanted. For example, some items are also used during classes and for learning, such as portraits or posters. Because of this, if you don't have enough of them, a queue forms in front of them, and the students get upset (understandably), but having four portraits of a wizard in just two classrooms took away the beauty of it. Additionally, you have to repeat the same rooms several times throughout the campus, and because of the few amount of decoration items available, it quickly becomes impossible to decorate them all in a unique or pretty way. This is further enhanced by the limitation of where you can place the items; for example, you cannot place couches outside of the lounges or bookshelves unless it's in the library. 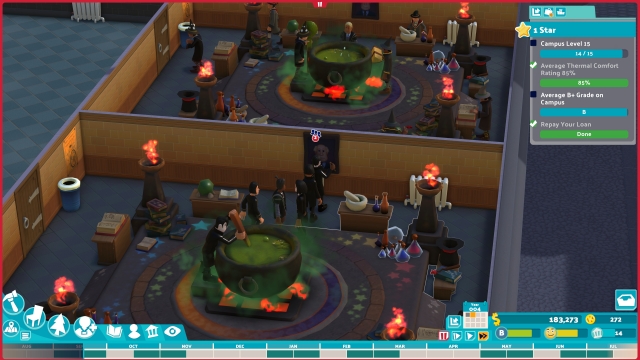 And lastly, the options for wallpapers and flooring are — for the most part — atrocious. Especially in the staff break room: they look like they're stuck in the 1970s, making it stand out. Although the other rooms' options aren't much better, this might not be as difficult to work around if you could use all the possibilities of flooring and wallpaper in every room.

That being said, considering Two Point Campus isn't just a decoration game, I think it does a good job at implementing enough of it — especially if the developer team plans to bring out DLC with more — and not to mention the Steam Workshop, which might add some pretty nice items. However, if you're big on decorating and that's a major selling point for you, maybe wait and see what else they add in both items and features or get it at a discount, as the game is still awesome.