Potato Sack ARG: Remember When GLaDOS Took Over All Those Indie Games?

Valve’s darkly humorous puzzler Portal 2 released 10 years ago. Can you believe it? That’s 10 years since we first made friends (and enemies) with moronic machine Wheatley; 10 years since we plummeted Long Fall Boots-first into the sleazy history of Aperture Science with Cave Johnson; and 10 years since we formed the most unlikely of bonds and made amends with murderous AI GLaDOS. There’s no doubt about it, Portal 2 was a masterpiece, a gel-sliding ride through history, a tongue-in-cheek look at the absurdity of bureaucracy and a deeply emotional story all rolled into one incredible package. Even now, a decade on, it holds a permanent place in that warm, cosy corner of our memories alongside our favourite films and the last day of school before summer. Are you remembering Portal 2 now? Are you smiling? Yeah, me too.

Not so easily remembered, at least for most of us, is the potato-fever that swept the indie gaming scene in the run-up to Portal 2’s release. If you’ve played Portal 2—and you really should have done by now—you’ll know why Aperture Science and potatoes go hand-in-hand. Before the game’s release, though, an eclectic Steam bundle titled “The Potato Sack Bundle” didn’t immediately ring any Portal ‘bells’ in players’ minds. It certainly didn't spell the start of a Portal 2 ARG, but that, my friends, is exactly what it was.

An ARG (alternate reality game) is a style of game which fuses digital media with real-world interaction to tell a story over the course of days, weeks or months. Players will often need to work together, solving clues and carrying out real-world tasks to progress, and sometimes even impact, the narrative.

Released on the 1st April 2011, The Potato Sack Bundle featured 13 games (listed below) from all around the indie gaming scene of 2011. There was nothing clearly linking the games upon the bundle's launch, except for how each of them had recently been updated through Steam, with patch notes mysteriously using the hashtag “#PotatoFoolsDay”. So what was the deal? How and why were these 13 games, spanning 10 developers, joining forces to promote Portal 2? To answer that question, we’ll need to rewind a little and take a look behind the scenes of Valve in late 2010.

Following the success of the radio decoding ARG which led to Portal 2’s announcement earlier in the year, Valve was eager to try its hand at crafting another, more ambitious real-world challenge for players to take on, and it wanted to get other developers involved too. The pitch? Indie developers were to work with Valve to integrate a cryptic, three-stage set of puzzles into their game, which would feed into an overarching real-world code-cracking mystery. Initially, the puzzles would make no overt Portal references, but the connection would eventually become clear, with the whole journey eventually leading up to the release of Portal 2. 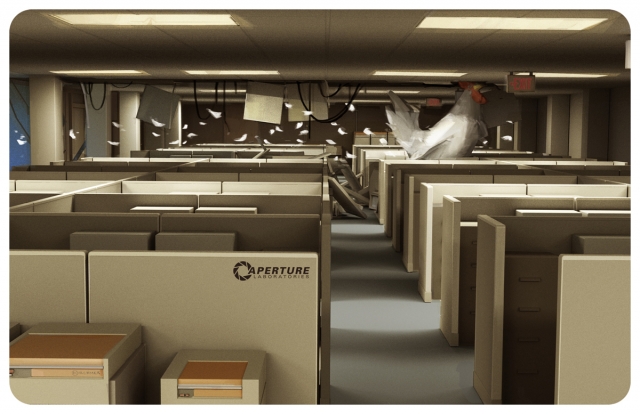 It was exciting, collaborative and—more than anything—a good bit of fun. Naturally, the developers were up to the task, and The Potato Sack 13 was soon assembled, ready for the event’s launch on April Fools day 2011.

The first phase of the Potato Sack ARG began with the launch of the 13-game bundle and the release of the aforementioned “#PotatoFoolsDay” updates. Players, upon exploring the newly-updated games, would find a strange glyph, a letter and nonsense sentences. Actually, the sentences weren’t complete nonsense: they were essential, along with the glyph and singular letter, for decoding a 13-letter password, COLLABORATION, to be used at a later stage. With the password decoded, the ultimate goal of phase one had been achieved. Phase two was ready to begin. 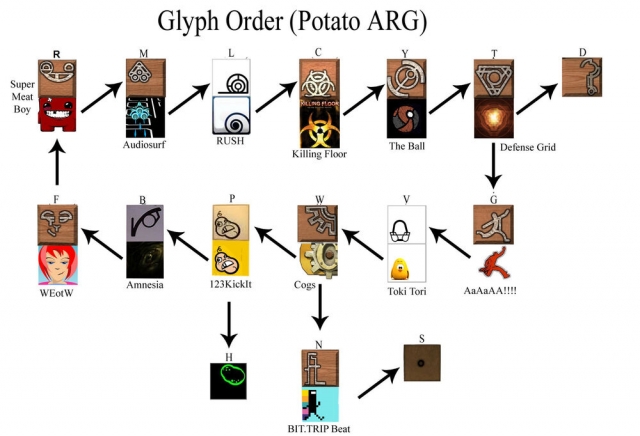 Before we jump ahead, though, there were a few novelties worth mentioning in this phase from developers who were clearly enjoying themselves with the whole potato ordeal. For example, Toki Tori developer Two Tribes hid glyphs and code cyphers outside its real-world headquarters, disclosing the necessary latitude and longitude coordinates within hidden in-game levels only accessible to players with the term “potato” in their username. Amnesia developer Frictional Games added a phonograph to one of the game’s side rooms, which played static when activated, eventually changing to different sounds in subsequent phases; it also replaced the Damascus Rose petals with potato shavings. Killing Floor developer Tripwire Interactive replaced the game’s ‘money’ model with—what else?—potatoes.

With the “COLLABORATION” password discovered, phase two was unleashed, and each of the 13 games was hit with another update. This time, the connection between The Potato Sack Bundle and Portal was made clear; players knew GlaDOS was back to her old tricks. By completing various unusual challenges within the games, players would be presented, through the Steam in-game web browser, with a mockup of an Aperture Science computer terminal. By inputting the correct password, found in hints throughout the 13 games, players would be able to download .zip archives featuring never-before-seen Portal 2 artwork. Hidden within the alpha channels of these images (it’s an image formatting thing) were images of locations around Seattle. Strange? Yes. Important? Eventually, but not just yet. Also within each game’s archive was a portion of another, incomplete archive. By combining each part of the incomplete archive and using the “COLLABORATION” password discovered back in phase one, players were able to gain access to yet more Portal 2 artwork with—you guessed it—more images of Seattle hidden within.

Players worked together to place each spot the Seattle photographs referred to and plot them on a map. It soon became evident that the markings, when joined together, spelled out a word: prelude. And with that discovery, phase two drew to a close, ushering in the third and final phase.

Just like with phases one and two, phase three’s launch was marked by another update for each of the 13 Potato Sack Bundle games. This time, Portal was front and centre, with titles like Killing Floor releasing a full Aperture Science map and Toki Tori placing GLaDOS in the background of levels to mock players.

It was possible to open another fake computer terminal in this update too. Instead of artwork, though, each game’s terminal would play a snippet of dialogue from GLaDOS herself, referencing two of the photograph locations around Seattle. With this context, players managed to plot a new course on their Seattle maps, conjuring up a new word: nelipot. This, it turned out, was the name of a Steam group with even more Portal 2 artwork and a QR code. The discovery of this group spelled the conclusion of phase three and the introduction of the ARG’s final stage: Crescendo.

Following the QR code would send players to a “Folding@Home” parody website known as GLaDOS@Home. The website featured a countdown and a cryptic message. When the timer hit zero on the 15th April, another countdown began, this time leading to Portal 2’s planned launch on the 19th April. This wasn’t just a countdown, though: there was a twist. By playing the 13 Potato Sack Bundle titles, players would generate enough GLaDOS@Home CPU cycles and speed up the clock. That’s right, by spending time in games, players would bring forward the release of Portal 2 for everyone on Steam. This was a big deal. Players knew what they had to do; they got playing. 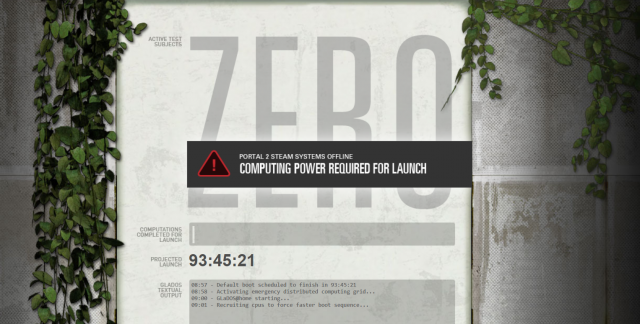 In the end, players’ efforts saw Portal 2 launch nine and a half hours early on the 18th April instead of the 19th. Okay, sure, that’s a little underwhelming, but it wasn’t about the reward. Forgive the cliché, but the Potato Sack ARG was about the journey, about players and developers coming together to solve puzzles, crack codes and indulge in some potato-themed shenanigans. It was a special moment in history, an instance of cross-developer collaboration on a practically unheard-of scale. What’s more, it was all in celebration of one of the most revered videogame franchises of the 21st century.

This retelling of the Potato Sack ARG saga was little more than an overview. There is so much more to tell, both from the perspective of developers and players. If you’re interested in reading more, there are some fascinating behind-the-scenes blogs which highlight each developer’s unique contribution to the ARG. Rob Jagnow of Lazy 8 Studios created a superb five-page write up of the whole event; Frictional Games too wrote an in-depth postmortem of its own contribution with Amnesia. Additional write ups from Tripwire Interactive (Killing Floor), Two Tribes (Toki Tori) and Teotl Studios (The Ball) also provide unique looks at the event. I highly recommend you give them a read and go digging for more material exploring the ARG. There's plenty out there.