I grew up on a hardcore diet of R-Type, Stargate, Silkworm, Chaos Engine, Stardust, Turrican, and Xenon-2: Megablast (and yes, the full title is important if only for the soundtrack acknowledgement), so I like my shooters shooty regardless whether they’re sideways scrolling, top down, or platforming. If you read my previous article about Geometry Wars, you know that, for me, Bullet Hell is the closest this ADHD reject gets to a Ritalin fadeout - casually dodging through a cascade of dakka centers me in a way that only building LEGO can normally achieve.

I came to Radiant Silvergun late. It was one of those latter day Saturn games which I missed, having sold out for the wonder of a games platform that might last longer than eight months. It was only upon its Xbox 360 release and a love affair with my beloved Ikaruga that I finally got a chance to play the game, and initially, I thought it couldn't compare to the bold contrasting simplicity of Ikaruga.

How wrong I was.

The beauty of Radiant Silvergun is that in can be played ANY WAY you like. If you want a mindless shooter where you just hold your finger on the A button while you dance around the screen; you can absolutely do that from beginning to end with arcade mode. If you want a challenging story mode where you can't continue if you die, and you have to go back to the beginning and learn the levels, you can do that too! But if you want extra depth to your shooters, ho ho, this is the game for you! 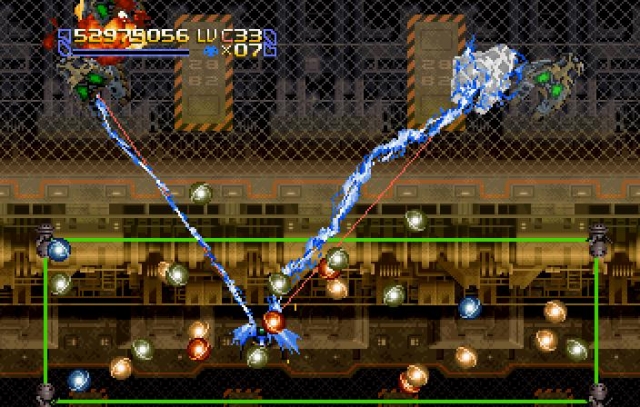 The beauty of this game comes with the fact that you have SIX weapons available to you, AT ALL TIMES. Unlike most shooters, where you pick up one power-up you lose the previous, you can jump between all six weapons at any time. Full concentrated forward firepower is where you'd expect it and it does exactly what you expect the default weapon on a shooter game to do. The button above it gives you concentrated rear firepower. Then you have a low-powered, wide-dispersal shot and a powerful but slow fire-rate homing system. It's worth noting before we go any further that on the original arcade, there were only four buttons controlling these different weapons. The following extra weapons required pressing two of the buttons at the same time, sort of how you execute a throw move in Tekken. And just like with Tekken these combinations migrated to the shoulder buttons for home use. Although I'm sure purists prefer to use the standard four buttons and forsake triggers buttons.

At a glance, the left trigger offers the disappointing choice of weaponry, with a lock-on mechanism that scans back and forth looking for enemies, and when it finds one it locks on with a continual burst of low-yield laserfire - however the genius of this lies in its ability to fire through solid walls that your ship and other weapons - and even enemies - cannot penetrate. It's more cunning than a weasel dressed as Lord Blackadder if used correctly. Advantage: me.

The most powerful projectile at your disposal is on the right trigger, sending out powerful but uncontrolled bombs sideways, and these explode with quite some force on impact - or for the more skillful players, when you release the fire button. This dead-man's switch means you can detonate a bomb before the enemy arrives at its position, turning it into a very tactical bit of kit.

But there's more. Your super, super powerful weapon is a melee weapon. "I thought you said there were six weapons?" I LIED! 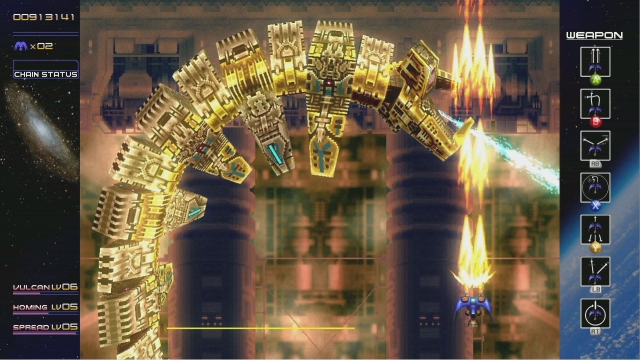 Yeah, a melee weapon in a videogame. Awesome, right? Your ship contains a very powerful sword which is not only super powerful in short-range attacks, but it can also bullet-eat, literally the only way to get through some sections in one piece. If you collect ten special enemy shots with your sword, you can unleash a super-powerful attack which wipes out most enemies on screen and renders you temporarily invincible.

These weapons introduce a massive tactical element to the game, an element which makes replaying the first level of the game continually an absolute joy.

The game itself and the levels are always interesting and varied, with intelligent enemies mixed in nicely with dumb cannon-fodder drones, which give way to "forget about shooting and just survive" dodge-athons, and the levels are nicely broken up with sub-bosses before you get the final big bad at the end of every level.

Even the bosses offer you a twist on the same old end-of-level baddie. Sure, you can dispatch the enemy as quickly as you want to get it out of the way with minimal risk of lost lives, or you can do it the PROPER way. If you work your way from the outside in, killing off weapons and turrets and other parts of the boss, before finally killing off the central unit, you get a rather large 100% DESTRUCTION bonus. The choice is yours. Heck, if the bullet-eating, survival aspect of Ikaruga spoke to you, there is no reason you cannot attempt to play through Radiant Silvergun as a pacifist, avoiding all enemies, eating bullets when necessary and surviving the time-limited bosses without a shot fired. Although this can be really annoying when you've 90% destroyed a boss and he suddenly self-destructs meaning all your hard work to get the full distraction bonus is for nothing.

If that wasn't enough, there is yet another level of depth to this game: chaining. For maximum gains, if you chain the colours of your enemies you get a bonus for multiples of three, I recommend playing the first level just focusing on red enemies and seeing how high you can get your score. There is also an Ikaruga-style chain scoring system for those who want to be able to shoot at all enemies, where you have to chain each colour group in multiples of three. This is unlike the preset option where swapping colours after every group of three doesn't reset the bonus multiplier. Amazingly, it was only during writing this review that I found out this is a secret scoring mode, only unlocked if you have a certain Ikaruga achievement on your Xbox Live gamer profile already. Since my Ikaruga-fu is as strong as I thought, this was included from the offset. 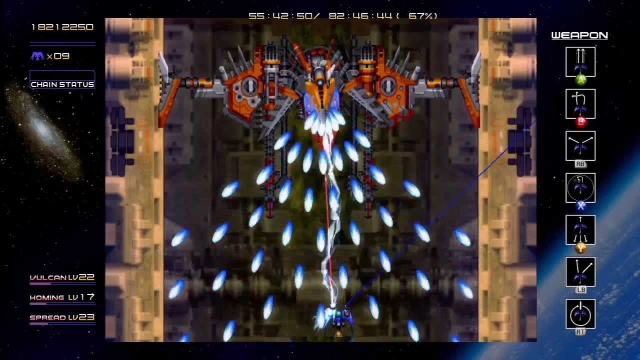 So chaining, bullet-eating, multiple weapons... what else? Well, the actual vulnerable section of your ship is very, very small, meaning you can fit between the smallest of gaps and smallest of non-bullety space without dying, what's more, when you're close to an object it registers you're close by kicking off sparks which, guess what? Rack up the points!

Combine all that with the fact that this was an incredibly fun game even if you just hold down A and shoot at things in the first place, and you have quite a game available. There are also hidden secrets throughout the game, just to keep you achievement hunting.

Oh, plus there is a multiplayer co-op mode, but if you're anything like me, additional players will just be getting in your way and killing your chaining opportunities. Videogames are a good way of turning friends into enemies, this is why I play against strangers online.

I mentioned the story mode earlier, that does indeed mean there is a story. According to Wikipedia "An octahedron-shaped artifact called the Stone-Like, along with a non-functioning robot, has been unearthed. Earth's secretary of defense, Chief Igarashi, orders the Stone-Like to be examined. Meanwhile, up in Earth's atmosphere, inside the spaceship Tetra, Commander Tengai issues Buster, Reana and Guy to test out the three new Silvergun prototype fighter crafts", it goes on like that for a couple of screens, but I can save you the trouble and translate it into a soundbite; "there are bad bastards about, shoot them. Increase score." This shortening of the plot can be applied to 99% of shooters, the other 1% being saved for the "turns out you're the bad guy" twist. This game is all about scoring as many points as you can, and then beating it, and once again the Xbox 360 and Wi-Fi mean this is so much more satisfying than doing this on an Amiga 500 or a dusty old arcade that turns the machines off every night, as not only do your scores save, but you can compare them against the world. Amazing! Even more amazing if you think of all the advancements we've had in videogaming and with the internet in our lives, and that is my favourite part of both.

So this is supposed to be a review, and you'll notice I've barely discussed graphics or sounds and I haven't come close to mentioning a final score. I'll make it simple: It's an old-school shooter with a twist. Like all my favourite games, it appears very shallow, but there are incredibly deep depths to explore, should you feel so inclined. It looks and sounds much like you expect (worth noting it was updated for HD, cutscenes were added for the Saturn by Gonzo Studios and they are all included here along with subtitles) and as for a final review score, you'll know from what I've written if this is for you. It's a polarising game, no-one out there will think it is "just okay". Huge chunks of the population will hate it, or won't be able to see what is happening, or just plain aren't good enough to play this type of game - that's not a criticism, it's just a skill-set thing, I don't have the skill-set for 1,000 hour long quests) and I'm sure it could induce a panic attack into some people. But if you like your shooters rewarding, then this IS for you.