Max Payne 3, like many pieces of art on the latter end of a trilogy, is a divisive game. Whilst well received by critics and third person shooter players as a whole, many long time fans of the series were unhappy with the new direction that Rockstar took the titular character. Some felt the story was off-kilter and overly depressive when compared to the original Max Payne and its slightly tongue in cheek but still incredibly competent storyline. Others were displeased with the added cover based mechanics and more sluggish gameplay.

I personally came into the series as a whole during the summer of 2019, playing them all within the span of a month. As a result, the first two Max Payne games were very fresh in my mind going into the third installment. In addition, the narrative and characters in the original duology had a lasting impact on me and even my own writing. Even before playing Max Payne 3, I’d have gone as far as to name Max Payne as one of the best shooters I’d gotten my hands on to boot.

Needless to say I had high expectations for the finale of Max’s journey. This time in the backdrop of urban Brazil, a heavy contrast to the Bogart flick inspired streets of New York seen in his roots. Despite the many, many changes made to the regular formula that I’d already been able to observe from videos and trailers, I wasn’t deterred. If Rockstar had tried to emulate Remedy’s unique writing style, I don’t imagine Max Payne 3 would have lived up to its legacy. Sam Lake is a very distinct writer, and Dan Houser of Rockstar is similar in this regard. It would have been a waste of the latter’s talents to try and wholesale copy what Remedy did with Max’s character in the first place, at least in my opinion.

So, I was expectant, but also open minded. Was I disappointed in the end? Did Rockstar manage to build upon the foundations Remedy built, or did they simply knock them down in favour of their own construction? 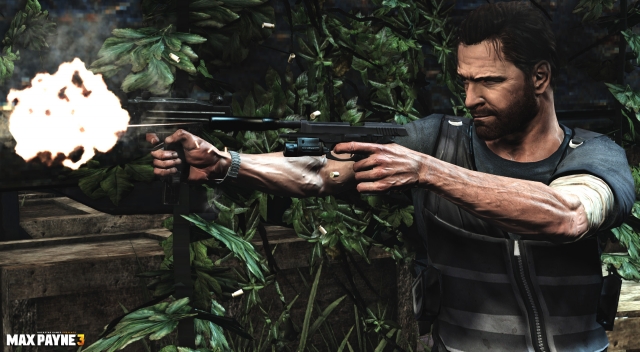 Well, from a gameplay standpoint, I was far from disappointed. Max’s first enemy encounter involves a band of kidnappers and an M9 Beretta, and it immediately struck me how punchy the weapons felt. A gripe I’d had with Max Payne 2: The Fall Of Max Payne was how comparatively weak the gunplay felt when put against the original’s fantastic ragdoll physics and crunchy gunshots. Max Payne 3, whilst shelving the ragdolling, instead turns to a simple but effective bullet trail and tiny hitmarker to let you know exactly when you’ve ended a bad guy’s life. This, combined with the loud and satisfying sounds erupting from your guns, makes for fluid but endlessly gratifying shootouts more reminiscent of Michael Mann’s body of work than Remedy’s John Woo influences. Different, but equally as thrilling.

The movement itself strikes a fine line between the more sluggish physics of Rockstar’s later titles and the quicker, lighter movement mechanics of Max Payne and its sequel. Looking back, though, I can see why a fan might have been disappointed by it. For one, there’s a lot more geometry and objects for Max to bump into whilst shootdodging and rolling around the place. For some levels this can often make for frustrating moments where you’re attempting to kill an entire pack of enemies in one dive but instead thump into a nearby pillar and are forced into oblivion, to try again. It is somewhat evident that the levels were built around the addition of being able to hide behind cover and blind fire and, coming straight off Max Payne 2: The Fall Of Max Payne, this can be jarring. Luckily Rockstar were wise enough to keep Max’s other techniques for staying alive intact, and you can still very well play the game as you would the originals, albeit with a little more care. Rolling is still as useful as ever for avoiding enemy gunfire and conserving bullet time, and hip firing is as accurate as you make it. The game even has modes prohibiting the use of cover upon replays, which adds extra challenge for those willing to forgo standing still entirely. Max is a little slower with age, but he still has tricks up his sleeve. However, where Max Payne 3 shines the most is in its fantastic presentation and detail. Whilst the game opts for more typical cutscenes rather than the graphic novel style of its predecessors, periodic freeze frames and sliding transitions mimic and reference the comic book format. The transitions between past points are instant, filtering away backgrounds and environments with distortion and aberration filters around Max to create a seamless story that mimics a half-remembered, blurry recollection of the past. This fits with Max’s seemingly permanently inebriated and exhausted tone, highlighted by the haunting but exhilarating score composed by Health. The cinematography of the cutscenes themselves is top notch, though if you’re at all familiar with Rockstar’s body of work that’s little surprise at all. The one gripe with the presentation of the story that sticks out like a sore thumb, especially now, is that the rendered cutscenes are locked to 30 frames per second. When the game itself runs smooth as butter normally, this is especially egregious and can be incredibly distracting when playing the game for the first time through.

The detail of the game itself is also jaw dropping. From little things like Max still carrying around his rifle when you switch to a sidearm, to the insane amount of variation in Max’s running and movement animations, the game always looks deliberate and smooth, like what I’d imagine a John Wick game to look and play like. Bullets and shells are even rendered in-engine and can be seen in a final kill cam once you eliminate the final enemy in a sector, flying and splattering into enemies in juicy slow motion.

I’d go as far as to say this even trumps Grand Theft Auto V in the sheer amount of detail found in the gameplay itself. The world too, while mostly linear, is impressively scouted and rendered, feeling claustrophobic but often exceedingly massive in scope. Sao Paulo provides a chaotic foil to the streets of New York and Hoboken, and succeeds in making the player feel as much of an outsider as Max in his Brazilian pursuit of rescue. 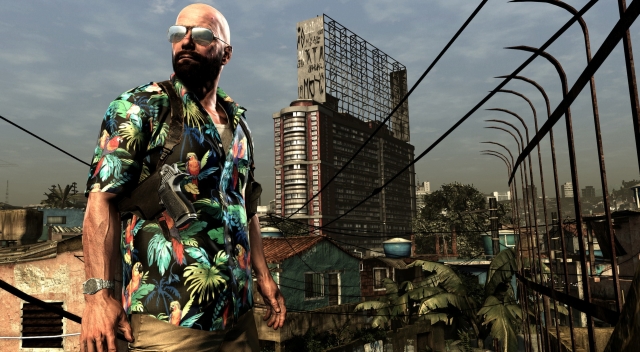 With all this combined, you’d almost mistake me for saying that Max Payne 3 is near perfect. And, spoilers, it is one of my favourite games of all time. But one aspect does drag the game down, and that’s the story itself.

This is one of the cases where the diehard fans have a point. Max Payne 3, whilst succeeding fine enough as a standalone tale, completely fails to address the ending and story arc of the previous game, and at times can feel as if it is a story about another character entirely. Without getting too heavy into spoiler territory, Max Payne 2: The Fall Of Max Payne ended on a bittersweet note. Max had come to the end of his journey, and whilst suffering loss, had come to terms with his past and was ready to move on. This is, admittedly, not ideal for sequel fuel, but it was a significant point that could not have been ignored.

The titular character in Max Payne 3, however, is the most miserable he’s ever been. Even straight out of his family and partner being murdered in the original Max Payne, Max still had a witty demeanour and strong sense of humour. That was, in large part, what separated him from every other sad vigilante with a gun. Max’s older self, by contrast, absolutely leaks pessimism and self pity. This would not be so significant were it not for the fact that what happens to him to push him to that point, as expressed by the supplementary materials, is little more than a handwave that doesn’t go nearly as far as it should to explain such a radical change in personality. I don’t doubt that it is in large part due to the change in writers, but the fact that an explanation has to be found out of game, and such a weak one at that, is tremendously disappointing. This is why, I suspect, most newcomers to the series that came in on the third entry, had no qualms with the story. On its own, it’s a well written tragedy with enough twists and turns to keep most people satisfied. But to a fan, it can be frustrating to see such a naturally charismatic and compelling protagonist reduced to an alcoholic and depressive old man.

This isn’t to say Max doesn’t get his fair share of one liners, because he does. Whilst some of the dialogue can be reduced to miniature pity parades, Dan Houser’s humour comes out at other times, such as unique lines for picking up painkillers that’ll give you a chuckle. James McCaffrey’s performance, in addition, adds great weight to the dramatic moments and lines featured towards the back end of the game, as well as providing authentic narration all the while. The new characters, such as Passos, add some much needed balance to the mix, too.

And all in all, my gripes with the story aren’t truly enough for me to not consider this one of my favourites. The presentation carries the bad parts, and the gameplay is addicting enough for me to look past a good deal of them in any case. It carries the soul of the original, even if the shell might at times be unrecognizable.

So, if you were turned off before, give it another try. Go into it with no expectations. You might be pleasantly surprised.