As if to prove that having access to guns makes you more likely to shoot someone, CI Games decided to give me some guns and send me into stressful situations. But first, they had me play some Sniper Ghost Warrior Contracts, to really get a feel for it.

In the waning days of October, I was invited to a preview event. It took place in the former-HMP Ashwell in a facility run by The Gaol Events. Upon arriving I was plied with a fantastic pork and rosemary burger from Gourmazin, before being given access to the game. Days have passed and I’m still thinking about that burger. And what I would do before the day was out…

Sniper Ghost Warrior Contracts sees you taking on paid jobs throughout five areas of Siberia - steal information, hack laptops and carry out assassinations. Although I only had access to two areas, they would inevitably be filled with murder…

I was left to play the game for a while, where I dismembered, exploded, stabbed and shot a couple of dozen people. I won’t lie, I enjoyed what I was doing and managing to hit a 350m shot without relying on the new bullet trajectory system was a thrill. Although that system is quite user friendly, once you get used to it, I missed the more friendly dot showing exactly where a bullet would land in the previous title.

Suddenly, I was whisked away to an interview with Asim Tanvir, Karole Banaśkiewicz & Michał Jaworski (community manager, release manager & digital sales manager respectively) to discuss what I’d been doing. They were very proud of how realistic Sniper Ghost Warrior Contracts is - with some artistic license such as the HUD and near-future setting. The dismemberment system, which was recently revealed in a trailer, was something they really hoped players enjoyed. So long as a bug, which saw enemies flying straight up into the sky in certain circumstances, had been squashed. I did enjoy the dismemberment, given how much I’d enjoyed it in Soldier of Fortune years ago.

With shorter loading times, and more compact areas allowing a greater range of play styles and tactics, they were confident that Contracts would right the failings of Sniper Ghost Warrior 3. They did lament not being able to implement cooperative play in some way - but then the price would probably have gone up from the quite generous £24.99.

Once I was done, I was returned to the game for a short while. But then the horror began. I was summoned into Gaol Events’ main room and told to put on some eye protection. Then I was handed over to someone and taken around to an office building. He explained that I had to get to the other end of the building, then go up the stairs before heading back to the first end of the building by any means necessary. Then my contact would tell me what to do. The man gave me a handgun with 20 rounds in the magazine. When I expressed concern for the men I would be sneaking past’s safety, I was simply told “They’re here for you to shoot.” 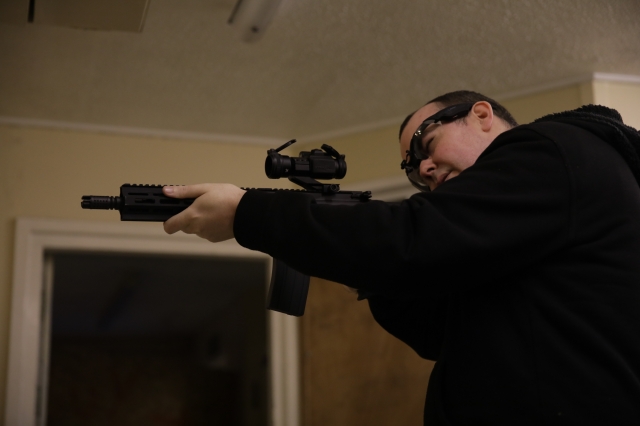 With that I was told that I had 10 minutes, and sent inside. What would happen after 10 minutes, I had no idea. I began sneaking through the dark rooms, with blocked off hallways and the sound of men on patrol. They were comfortable as they flashed torches around corners and chatted casually. They had no idea what was in store…

My heart was pounding as I approached the voices, trying to time my footsteps to theirs and decrease the noise that I made. I hid in a closet-sized bathroom before a light flashed down past where I had been stood. Waiting for tense moments before the footsteps began moving away, I exited the room only to step on spent ammo which made a sharp noise.

“What was that?” the closest man asked, before calling out to Victor - who confirmed that it was him. Not-Victor wasn’t buying it, though, and asked multiple times about the noise he had heard, which it seemed Victor had not. However, Victor came around another corner, right in front of me, and called out in surprise just as I pulled the trigger and shot him.

I didn’t have time to think about the enormity of what I had just done, as a third man appeared and I had to shoot him, too. Not-Victor was hidden where he had been, and was calling out “Man down!”. I rounded the corner and shot at him, I think I may have winged him, but I didn’t have time to check as his rifle fired off some shots into the wall and I hurried past. I could still hear him as I went further, either giving chase or rushing where he had seen me fire from moments ago.

As I got closer to the stairs, I heard another man up ahead patrolling. He hadn’t heard the gunfire, so was caught unawares when I shot him and he fell, emptying his rifle into a wall. I walked over his body and upstairs, where I was sure that there would be more enemies - but there weren’t. I checked every corner as I went, getting closer to where I was supposed to meet my contact. As I approached the exit door, he called out to me. “Comrade!” he called, then handed me a sniper rifle. “Target is there.” he said, indicating a general direction. My body running high on the adrenaline of shooting those four people downstairs, I brought the scope to my eye. But the goggles prevented me from seeing down it properly! Back from the stairs, I could hear men shouting and shooting, clearing each of the rooms I had just been in. They were getting closer, and my contact was urging me to take the shot. I barely got the target into the scope and took the shot, but I was certain I had missed! But as I watched the target fall, my contact spoke again. “Give me the gun, comrade.” he said, and I turned to come face-to-face with my pistol, being aimed at me by my contact.

Handing the rifle back, he indicated the nearby staircase and I gladly went down to where the first man was waiting. He asked if I’d enjoyed myself, and I honestly had. My heart was racing, and the bloodlust had gotten to me. I wanted more.

They were happy to accommodate me, leading me to another person who took me into an old cell block. He gave me a rifle, told me how to aim through the scope and shoot, and told me to follow him. As we made our way through the cell block, clearing targets - literally electronic targets designed to record where your shots hit - I couldn’t shake the feeling that there was more to this. We had to reach a laptop and upload some information, but it seemed that targets weren’t the only thing we had to worry about…

At one point, a hail of rounds rained towards us, peppering the wall. Before I could spot the person shooting, they had escaped. However, we had a route that we had to take, so I couldn’t give chase. After some more targets, we were fired upon again. It seemed the shooter was either a bad shot, or trying to scare us off. 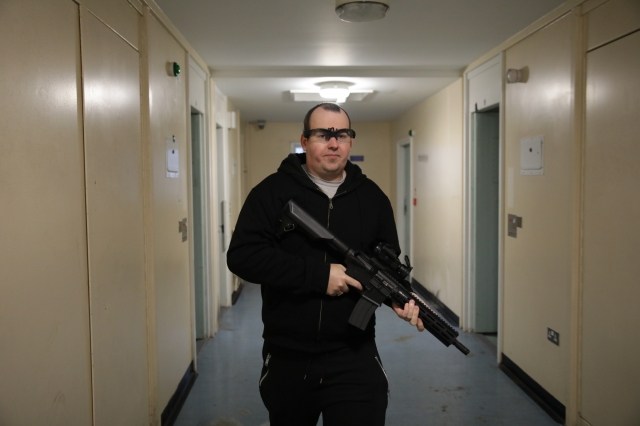 Things went quiet again, until suddenly a grenade came rolling down the hallway towards us! This guy wasn’t playing nice anymore, though luckily it went off before it reached us. We went to go down that hallway when the attacker ran to get in cover. Reacting on pure instinct, I shot at him and he fell into the cell face-first. Adrenaline pumping at full whack once more, we finished clearing the cells of targets before reaching our objective. However, when I began the upload, the room started to fill with gas!

We ran for it, mission complete and headed back to the starting point. Once again, I had loved it, and expressed as much when asked. I put the rifle down, but that wouldn’t be the last time I would be holding one that day…

I was led once more to another building, and shown a target range. Thanks to my recent experience, I was able to shoot 15 targets in 21 seconds. After a quick briefing on proper posture, and having to keep both eyes open while looking down the scope, I tried again. 15 targets in 19.7 seconds, so keeping both eyes open and swivelling with my hips instead of my shoulders had shaved over a second off. My third attempt was a hair over 19 seconds - but unfortunately, that was all I had time for. 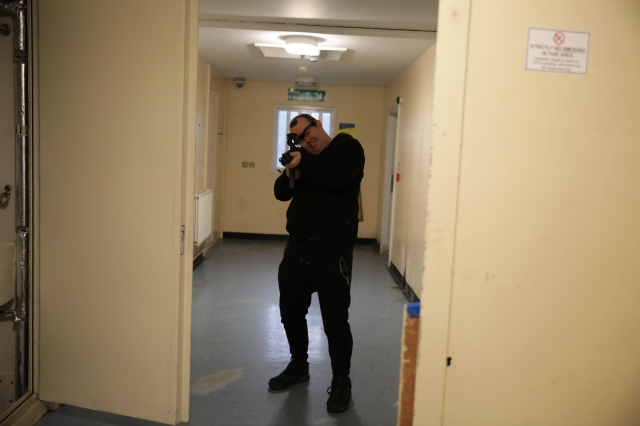 Still high off of the experience, I returned the eye protection before going back to the PCs which had been set up to play the preview build of Sniper Ghost Warrior Contracts. I had a lot to think about myself as a person when handed a loaded weapon, as well as having to write up my impressions on the really fun first-person sniping game. I can’t comment on how a review might go, but I have high hopes for a fun game with AAA qualities and a budget price. It’s coming to PC, Xbox One and PlayStation 4 on 22nd November 2019.

As for myself, I think I’d really like to play Airsoft again (did I mention it was Airsoft?), and if that experience was something that The Gaol Events do regularly, I’d definitely recommend it. Sniper Ghost Warrior Contracts might be realistic, but so was that…

This is extremely inappropriate following the shootings in Mexico.

It's just a game and this is just a bit of PR fun, nothing to do with mentally ill shooters and shouldn't be talked about as such.

Looks like you guys had great fun there Ace, totally jealous!

I always love to play this  Sniper Ghost Warrior 2, as the game has amazing graphics and story line, Every thing is perfect.  but if we compare with real life,it has nothing to do, Why do not peoples judge as game , why used in real life. Be brave.