Warhammer 40,000: Darktide is the latest release in developer Fatshark's Warhammer tie-in "Tide" series. It is a multiplayer-focused first-person shooter with light RPG elements, including character creation and progression, and levelled weapons. The previous two entries Warhammer: End Times - Vermintide and Warhammer: Vermintide 2 had their settings inspired by the high fantasy of classic Warhammer, but Fatshark changed direction with this title. Warhammer 40,000: Darktide is a part of what the community calls 40K; a series whose universe is firmly rooted in science fiction, and set (you guessed it) 40,000 years into the future.

Life in the future, at least through Games Workshop's storytelling, is a dire place where humans have extended their reach throughout space and attempt to rule it through a single imperial society. Now, I'm not really going to delve into the lore any further than that for three simple reasons: it's heavy stuff, it's vast, and for the purposes of this preview it's unnecessary. Just know that you are a prisoner and have been given a second chance to redeem yourself by serving the Emperor and joining the ranks of the Imperial Inquisition. 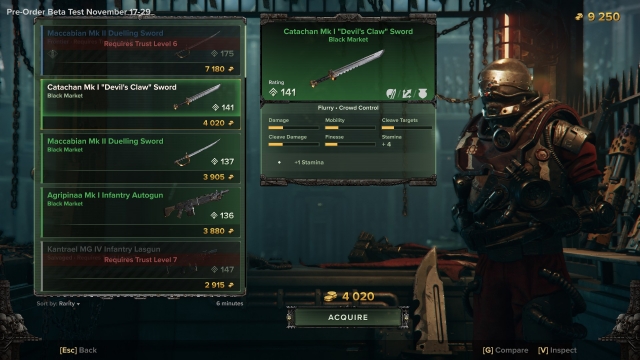 This brings me nicely onto character creation. This is something I didn't see conveyed much (if at all) in the marketing, but yes, you do indeed build your own character. After deciding on a gender, you proceed to select a face, hair, eyes, voice, and extras like tattoos and scars from a range of pre-created options. Simple and effective. I personally don't like the available models, as their features are often exaggerated and quite pronounced, at least when compared to a realistic human face. While I'm not completely convinced by the stylistic decisions made, I do appreciate that as a developer with an interest in standing out, Fatshark may have wanted to do something different from the regular FPS crowd. Maybe they were attempting to emulate the slightly disproportionate features usually seen on the figures of which these characters are based on, honestly, I don't know. Overall, not my cup of tea, but by no means a game-breaking issue — the whole thing is presented primarily in first-person anyway.

Along with your character's physical traits, you also create their backstory by choosing from a variety of lore-friendly options, including their home planet, crime, and class. Available classes are the self-explanatory “Veteran: Sharpshooter”, the powerhouse “Ogryn: Skullbreaker”, the fanatical “Zealot: Preacher”, and the mutant “Psyker: Psykinetic”. Each has a good bunch of strengths and weaknesses to help balance the team. Missions can double up on classes and there are no restrictions — send a whole dropship of Ogryns in, if that's what you and your friends like. 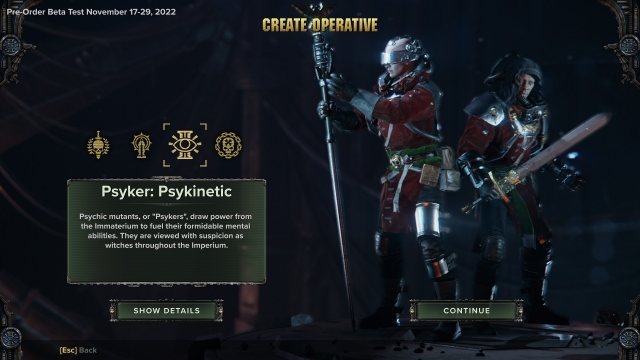 The missions themselves are well-made and varied too, and allow all the classes to play to their strengths at different times. Maps have both high and low points as well as tight corridors and open halls — all of which are beautifully crafted in the recognisably grim 40K style. Missions are made up of repeatable tasks; go here, do a thing, and get out! Anyone accustomed to Vermintide will know exactly what I mean, but if you're not, missions are basically quite long and unforgiving. You really do need your team — be they friends or randoms — by your side to get through the fight. The never-ending groups or relentless enemies have no trouble bringing down lone soldiers. This is an element Fatshark has nailed; the camaraderie these levels inspire, even between total strangers, is a special thing.

Going back slightly to the first-person aspect, general movement currently feels quite broken. This is in contrast to the combat, though (which is something that I'll discuss later). As this is the beta stage, Fatshark have announced that not all quality-of-life options are currently available, but that doesn't excuse the bizarre direction that character manoeuvrability has received. People using keyboard and mouse may have a better time, but this title does not feel well optimised for pads in the slightest. Uncomfortable options like "look acceleration" are on by default, but even when you turn them off and fiddle with the sensitivity settings, it's very difficult to achieve something that feels nice to play. Your character feels too floaty and there is little feedback from manoeuvring around the world. 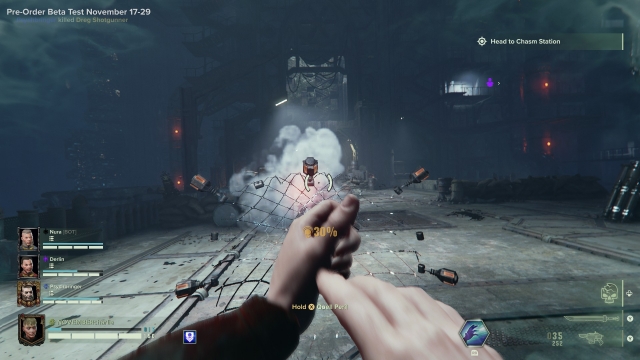 Combat, on the other hand, can be quite fun, provided that you prefer to hack and slash your foes. Again, I am unsure if this is a limitation in gamepad controls specifically or if I'm not grasping how it should be done, but movement is very all-or-nothing when aiming, it's far too slow to be practical in close quarters and should ideally be reserved for combating enemies further away. Unfortunately, aiming is also dictated by different Y and X axis speeds. For instance, on the Y axis, your characters move their aimed weapon at roughly twice the speed as they would across the X axis — it's horribly jarring when you're trying to line up a shot. It's bad and currently there are no options available to alter it. Where combat really shines is during melee fights, as the swords, knives, axes, and hammers all collectively clobbering their way through hordes of enemies — crushing them into paste as heads pop and limbs fly off — is a very fun time. Conversely to the rest of the game's movement, combat is otherwise brilliant. It's a strange thing, I honestly don't think I've ever played a videogame where some controls are a chore while others are so satisfying.

The final and easily biggest annoyance is Warhammer 40,000: Darktide's connectivity issues. They are horrendous. The load times are so long, it's like stepping back into the 1980s, and when you finally connect to a server there's a rather high chance that you will be instantly kicked due to lack of sustainable connection. If you do manage to connect and remain in the hub world however, that doesn't mean you're safe, as from there you can (and will) regularly fail to connect to missions. You can even be kicked mid-mission and lose all your progress. Going through 40 plus minutes of cracking skulls, and having nothing to show for it can be a painful feeling and is very off-putting. This issue is also random: I've had to suffer it quite a lot, but friends of mine have fared a bit better. 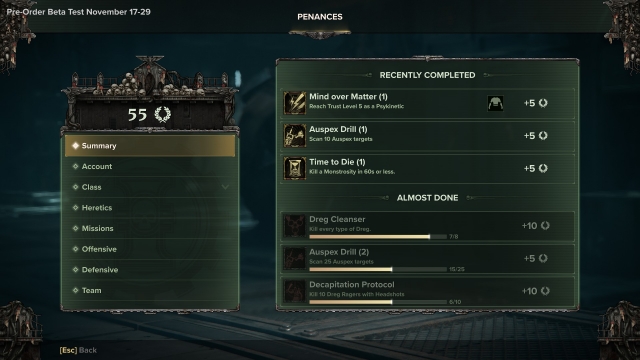 I hope Fatshark puts in the effort and fixes the issues I've outlined in this preview; I desperately want to love this game but at the moment I'm struggling to find a real reason to do so. Pardon the cliché, but when it works, it works, and when it doesn't, well, just look at the Steam reviews. I'm a realist — I do not expect changes and fixes to happen tomorrow. However, if Fatshark can fix the quality-of-life options and other technical aspects behind the game then there's no other reason for me to avoid it. It's an arguably great videogame held back by very poor optimisation.

Warhammer 40,000: Darktide is due out on the 30th of November, and will be available on PC, and Xbox Series X|S.