Razer, the company known for flashy gaming accessories and hardware, is developing its own high-end N95 respirator face mask. Known as Project Hazel, the face mask was unveiled at CES 2021 and features LEDs, a sleek design and a built-in microphone. I’ll let you get your snickering out the way early because, while this may initially seem like an outlandish attempt to slap a “gamer” aesthetic onto a piece of PPE, it actually looks to offer some incredibly innovative features. Some of them, which we’ll run through soon enough, may in fact pave the way for the future of publicly-available PPE and solve the social interaction difficulties inherent with having one’s face obscured in public.

Before we dive into Razer’s latest foray into the PPE world, it might be useful to explore why the company involved itself in the industry to begin with. Back in March 2020, when the COVID-19 pandemic was beginning to have a tangible impact on the world at large and PPE was the most sought-after commodity, Razer dedicated a chunk of its production power to help produce face masks. Reports indicated that the company made and donated over one million face masks, with engineers and designers working 24-hour shifts to make it possible, according to Min-Liang Tan, Razer’s CEO, speaking at the time.

Back then, the need for face masks was an emergency; it was all Razer could do to produce standard disposable, medical-grade masks. After all, that’s what the world was desperate for. Times have changed, though. While face masks are still in high demand, the market for non-disposable alternatives which fit into everyday life has never been higher. As the world slowly (hopefully) returns to normality, it’s unlikely that face masks are going anywhere. The risk of this virus making a resurgence is too great, and the number of people who remain at-risk is too high; plus, peoples’ overall attitudes to hygiene have changed on a fundamental level. Just like in many East Asian nations prior to the pandemic, face masks are almost certainly going to become a part of everyday life here in the West. 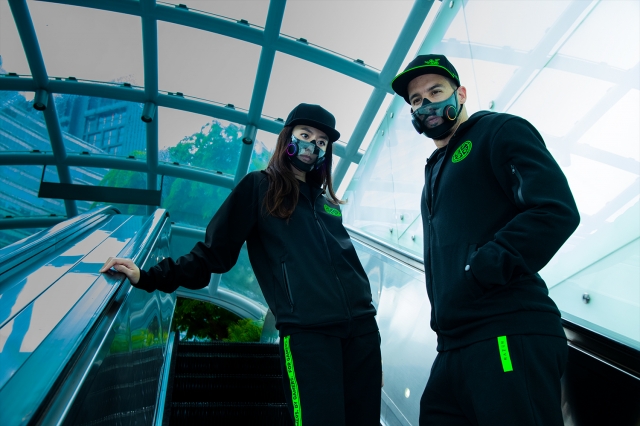 With that in mind, Razer’s Project Hazel makes a lot of sense: it feels like a natural progression of the company’s actions last year and a response to the current needs of the market. Unlike most—possibly all—other face masks out there, Project Hazel attempts to make communication with a mask effortless. Its transparent mouthpiece means that facial expressions and mouth movements are clear. Of course, it’s nice to be able to smile at strangers and benefit from the added clarity which facial expressions bring to a conversation, but this design feature is a game-changer for those who rely on reading lips for communication. On top of the isolation caused by the “stay at home” orders which dominated the last 12 months, those who rely on lip reading are twice as isolated by virtue of being unable to communicate even when they do venture out into the outside world. I can’t imagine how lonely that must feel. If this transparent mask design were to become widespread, it would empower those hard-of-hearing individuals to once again engage with the world. For those with an unimpaired ability to speak and understand the spoken word, Project Hazel also features a speech-boosting microphone. Yes, it sounds silly, and it doesn’t take long to dream up the snarky headlines which will undoubtedly follow its release: “Razer has made a face mask with a microphone—stay safe while you trash-talk the enemy team”. When you actually dig into what the built-in microphone does, though, the technology makes a lot of sense, and it doesn’t sound ridiculous at all, even if it is likely to drive the price up something fierce. Essentially, it acts like an advanced version of the microphone and speaker technology at the post office, recording your speech and playing it back to you without any of the muffling caused by that pesky perspex screen (or face mask material, in Project Hazel’s case). It’s this ability to remove the barriers to communication caused by face masks which makes Project Hazel an exciting piece of technology, one that establishes how face masks can become a feasible, non-obtrusive part of everyday life in the year ahead.

The mask boasts an array of other features too, including LED lights, rechargeable ventilators and a wireless charging case which uses UV light to automatically sterilise the product between uses. With the exception of the LEDs, which are a topic for debate, those are all fantastic features. Still, it’s the social features which make Project Hazel stand out, and it’s the reason I think we should take this product seriously as more than a ludicrous accompaniment to your “gamer” setup.