The XPS line of laptops is Dell’s premium line, encompassing the very best engineering and specifications that the company has to offer. The XPS 13 sits at the lowest end of the bunch, with the XPS 15 and 17 sitting higher up as, with what you have probably already guessed, much larger profiles. All of these models have now been refreshed for 2020, sporting Intel’s 10th generation Ice Lake processors, based on its troublesome 10nm manufacturing process.

The model I am reviewing here features the Intel Core i7-1065G7, which features vastly improved Intel Iris Plus graphics. The only other available option at the time of writing is the i5-1035G1, which on the spec sheet looks very similar to its i7 equivalent. Both feature four cores and eight threads, with stock and all-core boost clocks 300MHz higher on the i7. The biggest difference, though, is in the integrated graphics specifications; but we will get into more of that later when we take a look at the performance. My model also has 16GB of LPDDR4X memory, 1TB NVMe storage, 4K touch display, enclosed in an arctic white woven glass fibre palm rest. This retails for just under £1,720. The cheapest model starts at £1,418.99 (although there are savings available).

The XPS line of laptops is up against some strong competition, most notable that from Apple, alongside HP and Lenovo. The CNC aluminium chassis from Dell stacks up very well against these, with an overall solid and weighty feel. I would say that the unibody design from Apple looks cleaner, but the XPS 13 comes in just behind. Eight T5 screws hold the underside cover in place, which then pulls right off, giving you access to the internals. Unfortunately, memory isn’t upgradeable, which is a trade-off you must swallow when opting for high-speed LPDDR4X memory. However, in a departure from previous models, you can now upgrade the SSD. Be aware, though, as some models feature tiny 2230 drives rather than larger 2280 (which is the limit), so the provided heat sink, which also doubles as a cable guide for the WiFi antenna, will not be sufficient. Replacements are available online though, and to be honest, you could potentially get away without one.

Aside from the chassis construction, the other vital part of a laptop is its keyboard. The edge-to-edge backlit keyboard included here has slightly enlarged keycaps compared to previous years, but it is amongst the best I have used, particularly on a laptop this size. It may miss out to some since Apple ditched the fan un-favourite butterfly keyboard and switched to the new magic keyboard, but not by much. There is a satisfying click with every press, and on the whole I have found it very easy when typing on for long periods of time. I’ve written a few reviews for this site on it since I got it, and have had no issues at all. The touchpad is the best I have used apart from, again, a Macbook. Much better than any Lenovo or HP touchpad I have ever used, though.

Finally, there is the screen. It’s available in two flavours - a 1920 x 1200 FHD+ unit, or a 3840 x 2400 UHD+ display, both outputting 500nits of peak brightness. The FHD+ unit can be had with or without touch functionality, whereas the UHD+ is exclusively touch. Word of warning though - the touch enabled units, the UHD+ version of which my model is equipped with, has a good amount of glare in direct sunlight. At full brightness, it’s sort of OK, but if you’re going to be using it outdoors more often I would definitely opt for a touch-less unit. If you’re wondering why the resolutions are slightly off, it’s because Dell has rid itself of its logo under the display to expand the screen to a 16:10 scale, which the company says makes it 6.8% larger than before. With its almost entirely frameless bezel, it looks truly stunning. 4K scaling in Windows is still a little bit iffy at times, but I can hardly blame the laptop for the OS’ shortcomings. Sitting slightly above the display is the webcam, along with infrared cameras that have full support for Windows Hello, or Howdy if you’re running Linux.

Dell have gone all-in with USB type C with two Thunderbolt 3 compatible ports, and a single headphone port. For better or worse, the dongle life is here, but at least there are some good options out there now. In the box is a 45W charger, so if you do opt for a dongle with USB-PD, you’ll probably want to upgrade to a higher power brick as the unit can potentially pull more than 45W in some workloads. There is also a full size SD card slot on the left side, which is handy should you have a need.

Internally, the Killer AX1650 is included with all models in the range, offering the latest WiFi 6 spec with speeds of up to 2.6 Gbps if you have a wireless system to saturate it. Bluetooth 5.1 is also standard across all.

Perhaps one of the most disappointing parts is the external audio. No amount of “professionally tuned” marketing speak from Dell escapes the fact that these dual 2.5W, with 4W maximum output between the two, downward firing speakers are really quite poor. They are tinny and lack clarity at pretty much all volume levels. They’re OK for some background music or the odd YouTube video, but for films or TV shows you’ll be clamouring for something better.

Whilst Intel struggles with getting desktop CPUs on its 10nm node to release, Ice Lake brings about a decent level of performance - particularly with its integrated graphics, which comes at a good time considering AMDs substantial improvements in this segment.

At a purely CPU level, the improvement from the i5 and i7 probably isn’t worth it to the vast majority of people. The slightly higher clock speed of the i7 doesn’t have strong enough gains to justify the higher price. Where it is better, though, is in graphical performance; the i7 features 64 Iris Plus execution units, compared to 32 on the i5, dubbed as UHD Graphics. It appears to scale quite well, so you can expect roughly 50% performance gains on the i7 over the i5 - although I won’t be directly comparing them here.

Other outlets have seen this i7 pull above 40W, however in Cinebench I did get it to just shy of that to 38W. That is quite clearly above the advertised 15W TDP - even 25W turbo TDP - which causes temperatures to sky-rocket dramatically to 100 degrees C. There is momentary boosting across two of the four cores (usually) at 3.8GHz, but it’s not long (i.e. a couple of seconds) before it is dropped down to 3.4GHz all core and tends to hover at 2.9GHz, drawing around 30W of power. This is within Intel’s specs, so nothing surprising at all. 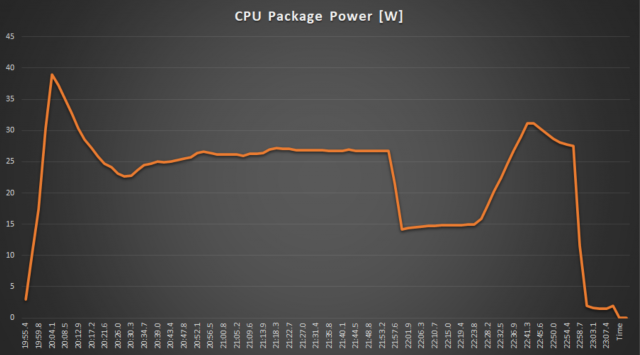 That’s still pretty impressive though for what is a very small and compact machine. Of course, the fan kicks in at full whack, but even then it’s really not too loud considering how much air it is trying to pump out. If you were playing a game through the built-in speakers, you probably wouldn’t even be able to hear anything aside from a slight whine during quieter moments. 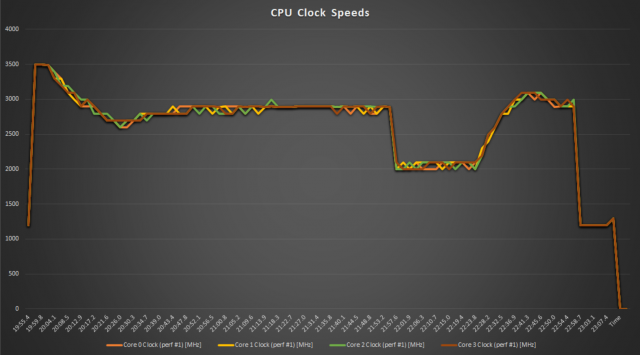 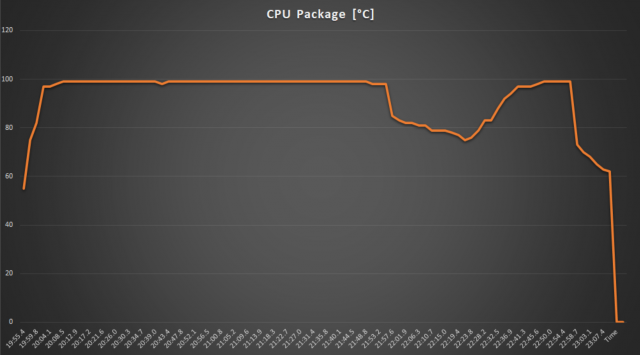 These charts are taken from the same run in Cinebench, which is a purely CPU bound test. After running other benchmarks, the result is usually the same, with Cinebench R20 earning a result of 1698 multi-core and 398 single core, over an average of five runs. Here’s how it compares against the top end (ish) Ryzen 7 Pro 4750U and two of its direct competitors:

In terms of productivity, PC Mark 10, which measures things like opening spreadsheets, video conferencing performance, amongst others, measures up with a score of 3,377 - just shy of the average 3,916 (at the time of writing) for an office laptop in 2020. The graphical scores bring this down, with typical office tasks scoring pretty highly. After all, the included Kioxia 1TB SSD in my model performs very well, with a low power draw. In average use, with Chrome, Discord, Steam and Spotify open, you’re looking at around six to seven hours of battery life, which can be improved by opting for the 1080p display rather than the 4K touch enabled version.

If you’re looking for a laptop to game on, then this isn’t it. Whilst the i7 does have greater graphical power than the i5, it will struggle with modern games, especially if running at 4K. With Rocket League, it struggles to run even at 640x400 with all the options turned down. At native 4K with everything disabled, it averages around 20FPS, making it practically unplayable. Lowering down the resolution can get you above 30FPS, but there are still frequent stutters. Minecraft, at least the Microsoft Store version, is perfectly playable at decent settings, along with other less demanding games like FIFA. But you won’t go much further than that. Still makes a good Football Manager machine though if that’s your thing.

If you’re after a small laptop with a decent amount of power for its size, decent battery life and a crystal clear screen, the 2020 XPS 13 is certainly a compelling device. It certainly doesn’t come cheap, and there are definitely many more affordable laptops in the £500 - £800 range that offer similar performance. However, they don’t typically feature near bezel-less designs whilst keeping Windows Hello support, or such fantastic keyboard and an almost perfect touchpad.

It also supports Ubuntu, with the developer edition coming pre-loaded with the Debian based OS. Dell offers compatible drivers for everything, however the fingerprint reader present on all other models (the developer edition does not feature one) can be a bit of a pain to get working, and there is some issue with the Killer WiFi adapter - it constantly complained to me that it wasn’t working as intended and to search for a new driver, even though it appeared OK to me. Battery life is slightly worse in Ubuntu, but I didn’t run any proper tests whilst I was testing it out. Some tweaking with CPU power governors would likely yield some better results.

It is disappointing that Dell isn’t currently offering any AMD variants of the XPS 13, but as it is, if you’re looking for a premium compact laptop, you can’t go far wrong.

The Dell XPS 13 9300 is my favourite laptop I have owned, with strong performance, superb keyboard and a good sized trackpad on a notebook of this size. It's just a shame there aren't current any AMD options.