In these desperate, isolated times, a comfy headset will certainly go a long way. With so many people locked up and working from home, you could possibly even make an argument for saying a comfy headset is essential. As a man suffering from colossal head syndrome and elf ears, I dread nothing more than sitting in meetings all day with a headset on.

There’s such a lightness to the EKSA E900 that I’d often forget I was wearing it during work meetings or gaming sessions. In these strange days, working from home, that level of comfort goes from being a bonus to pretty much a necessity. It’s a great feeling, ending several hours of meetings and not having to peel your ears away from the side of your head. For something that’s designed for gaming rather than work, it fulfills its new duty exceptionally. For any of those who may have concerns about the weightlessness, the headset itself feels sturdy and well designed and isn’t likely to damage easily.

Visually has a sleek look, a black coating and red metallic tint running into each earphone. From an outsider's perspective, they look professional despite being clearly marketed as a gaming headset. It’s accompanying cable is pretty long too, not restricting the more animated members of society, when they get the talking stick. 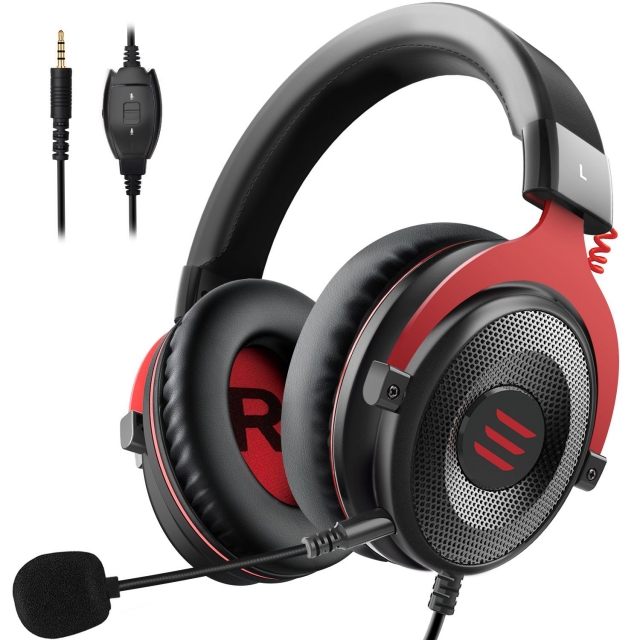 I find the audio quality can vary from time to time. For most games, it seems to sit at a nice level but they seem quite tinny when anything loud like an explosion happens. It’s not awful by any means, but there’s a clear dip in audio quality when the sound levels rise sharply - and this is something that’s translated across multiple devices. For the most part, the audio quality is fairly consistent and of decent quality considering the headsets price tag. As with many modern headsets, the E900 has a detachable microphone that can be adjusted quite freely. The sound quality of the mic is quite good, but seems to have difficulties picking up on what the user is saying - more so when using Windows devices. There doesn’t seem to be many issues when using the device on a PlayStation 4 or mobile device. Although the device doesn’t come with a USB adapter, the audio cable is pretty lengthy and there’s an additional splitter for the jack as well.

The headset comes with a rather frustrating rubber wire that seems to be getting tangled constantly. There are also in-line controls allowing volume control and the ability to mute your microphone easily. The option to mute the microphone comes in the form of a switch which is pretty easy to flick on and off. The volume is controlled by a wheel and is slightly more fiddly however. The wheel itself is quite small, probably about a quarter of the size of the plastic cases that it sits and is easily missable when trying to notch the volume up or down without looking.

Overall, I think the EKSA E900 is a very comfortable headset, especially for those who enjoy long sessions of use or simply have abnormally shaped heads like me. For the price, there’s not too much you can really complain about in regards to audio quality, although the microphone does occasionally have difficulties picking up the voice on desktop devices.

Although the wiring seems to tangle easily, I wouldn’t really see as much of a deal breaker. Whether it be for work meetings or gaming (or both) the EKSA E900 is a very solid piece of equipment.