There’s a sizeable group of large-handed people who, despite loving their Switches, struggle with the relatively diddy Joy-Cons that come packaged in with the console. Hardware manufacturer HORI has worked to appease these folks with the Split Pad Pro, an officially licensed pair of Joy-Con controllers that feel more substantial to hold than a pair of Tic Tacs with analog sticks. While my hands aren’t actually large enough to have difficulty with the traditional Joy-Con offering, I was interested in trying something different with some nice extra features at an appealingly lower price. After pretty much exclusively using these controllers for the past month or so, I’m ready to make a judgement, and it’s a good one: the Split Pad Pro is a superb alternative to regular Joy-Con controllers… for the right person.

Let’s start off with the kicker, it’s a big one after all: the Split Pad Pro has no wireless functionality, which means that these controllers are for handheld use only. I mention this so hastily because, for some players, this is an absolute deal-breaker—understandably so. Thankfully, my circumstances mean that this issue was irrelevant: I have an official Pro Controller for docked usage that I’d have continued using regardless of whether this Joy-Con pair was an option or not. At any rate, there’s no denying that it’s a significant flaw in the controllers’ design and likely a cost-saving measure above all else. 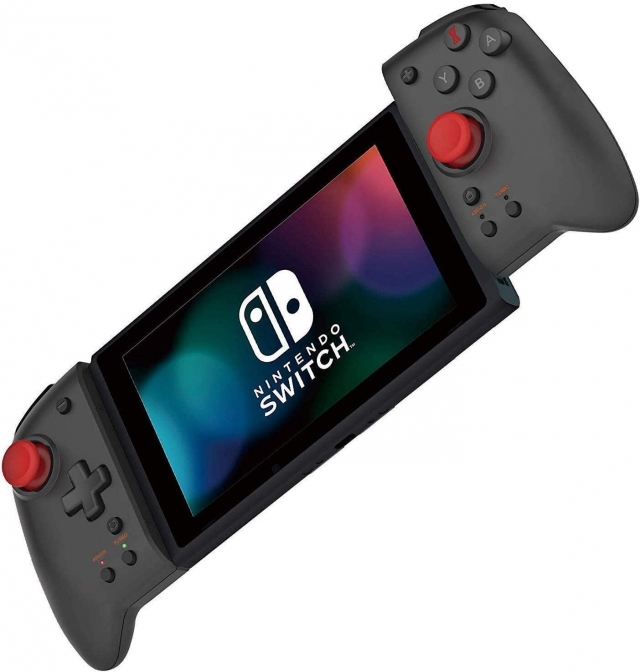 On the topic of cost-saving, it’s also worth pointing out that these controllers have also been stripped of the regular Joy-Con ‘bells and whistles’: no motion control, rumble, infrared or Amiibo support. Admittedly, lack of motion control could present an issue in some games, but I can’t bring myself to care about the exclusion of the other features. If anything, I find the rumble a little too loud for handheld mode and usually leave it turned off anyway.

It might seem as if I’m painting something of a bleak picture for Split Pad Pro, but for every negative listed earlier there’s a positive that I’m just waiting to gush about! Even before picking them up, the sleek ‘black with red accents’ colour scheme is striking: the controllers have been designed in association with Daemon X Machina (a fast-paced mech game) and I assume the choice of black and red —as well as the stylised ‘X’ button—reflects this. A textured finish to parts of the back also helps the product feel—for lack of a better term—premium. While only a small touch, it’s a factor that many companies producing third-party peripherals overlook.

Upon attaching the controllers and picking the Switch up, things go from good to better. They feel chunky in the best possible way; the analog sticks are less dainty and—hopefully—not prone to the dreaded stick drifting issue; on top of that, there’s an actual D-pad! Not four buttons that represent each direction: a real, honest to god D-pad! For a mammoth-fisted individual, these would be a godsend; even for myself they’re an absolute joy to use. I haven’t felt the urge to use a real Joy-Con since pulling these out of their box. It’s such a relief to use a Switch controller that doesn’t feel like it’s going to irreparably break upon being dropped more than about eight inches.

There’s a couple of bonuses too: programmable back paddles and turbo mode functionality. These, compounded with the inclusion of ‘proper’ analog sticks and the tie-in with Daemon X Machina should clue you in on the intended use for these controllers: shooters and action games. Regardless of your genre of choice though, these controllers still feel seriously good to use and come in at a damn sight cheaper than regular Joy-Cons: £45 RRP, but can be found without much difficulty at £35.

For people who often use their Switch in handheld mode, especially those with chunkier hands, the Split Pad Pro is a marvelous budget-conscious alternative to Nintendo’s official Joy-Cons. Beware, however, there is no wireless functionality AT ALL with this product; players looking to dock their Switches will want to consider looking elsewhere.

This looks great! Love those thumbsticks and bigger face buttons. Not too concerned about the lack of features since I would use it primarily handheld as well (also have a pro controller for TV). Might have to pick these up now that my joy-con has that drift :(

You, me and half the Switch-owning population are in that same joy-con drifting boat it seems. For the price, you can't go wrong with these things; I don't plan on giving them up anytime soon. In fact, I just put them down to write this comment!