When it comes to gaming, there are many things that are important to each gamer; controllers, monitors, and to some, headphones. When all of these work in perfect unison, it creates some of the best gaming experiences.

One of the most important aspects is the monitor. Whether it's for high frame rate competitive play, or graphics that will really make the attention to detail pop, there is something for just about anyone. And for the latter side of the spectrum, we have OLED TVs. Featured in today's review is LG's CX version.

Let's start with the technical stuff. OLED TVs have self-emitting pixels, which means that each pixel is capable of completely turning off to make for the best dark experiences money can buy. You could have the brightest pixel right beside the darkest one without either influencing the other. Apart from that, the CX is capable of a 4K resolution at 120fps with Dolby Vision. It's also a G-Sync compatible display, has VRR support, near-instantaneous response times, and is capable of roughly around 400 nits. All of this means that LG's CX is an absolute beast of a TV. These specifications should please just about any gamer out there. But, you can search Google for all of the pros and cons. How does actually it feel to use, and how bad are the negatives?

Straight off the bat, I can tell you that the TV feels beyond responsive. Due to the pandemic, I was forced to play on a 30Hz screen, which really just made me suffer greatly — especially given that I was playing Dark Souls III. So the upgrade to a 60Hz screen — let alone a 120Hz one — was greatly welcomed. I feel practically no input lag whilst playing high-intensity games such as League of Legends, Sekiro: Shadows Die Twice, and just about any shooter. So if you had a worry about a short response time, you can rest assured that it is as responsive as any other gaming monitor I've had.

This is without mentioning the beautiful quality of image OLED provides. Not only is the CX capable of 4K gaming, but also the individually-lit pixels offer a higher quality than any other LED TV capable of the same resolution with infinite contrast. I have never seen such a crisp and clear image; it feels like I could almost touch the things on the screen. The darker scenes — like whenever a character is standing inside of a cave holding a torch — are some of my favourite gaming experiences ever since I got myself an OLED.

The TV also has audio that truly rivalled my audiophile headphones, to the point at which I truly considered playing using the built-in speakers. Sure, the audio eventually proved to be weaker, but for the standard of every other TV I've had thus far, the CX truly astounded me with the beauty of the audio quality. Sometimes, I just like listening to things through the speakers rather than the headphones because of the feeling that the speakers provide.

This is all great and all, but the question is how it weighs in against the negatives. I'm seated right now at 4,802 hours of screen use, and with no noticeable burn-in. This is considering, however, that I have taken as much care of my OLED TV as I remember to; admittedly with some mishaps, like using it for article writing. 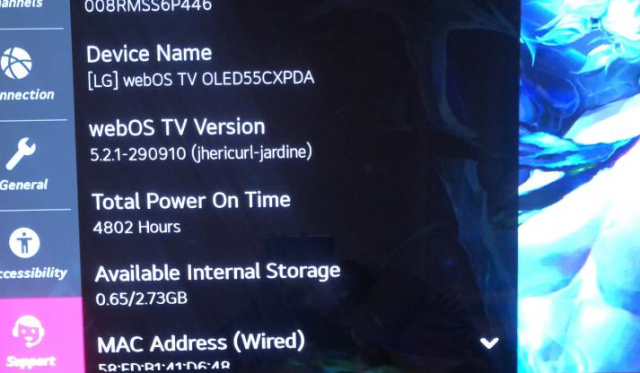 This doesn't surprise me, given that burn-in is more of a manufacturing error rather than an expected reaction. Sure, if you mishandle your TV and leave a red thing plastered on it for hours on end, it will eventually burn-in. But with regular and varied use, this shouldn't really be an issue.

The glare is noticeable in brighter rooms, especially given that the TV can't be at the highest brightness if you're trying to take care of it, and its limited nit output really makes this difficult. However, in areas with controlled lighting, or without any light facing it directly, the TV performs wonderfully. Sure, dark scenes will have you looking at yourself through the reflection, but that's not something I've experienced given the dark room I play games in.

And last, but certainly not least, the price. This will certainly be more of a per-person basis, but I found the price of the TV to be well worth it. It excels in almost every area it can. Audio and video quality, with gaming capabilities; there is little that I would say LG's CX version fails at, and that is something I'm astounded at. I couldn't recommend this TV more. Burn-in sounds like more of a problem than it is, just as long as you take a tiny bit of care of your TV. If you're willing to pay the price, you'll be getting the premium experience.

The LG CX is a top-tier TV that I could not recommend more. Its few faults — like the potential for burn-in — are negligible if you take care of your screen.