Funko, best known for the beloved POP! Vinyl models, has branched out into other areas in recent years, notably board games with Funkoverse. Well, the follow-up to that is a board game with a gacha mechanic - buy a pack of Thanostones and open them to discover which characters you now have!

Titled Marvel Battleworld: Mystery of the Thanostones, the gist is that Thanos has kidnapped everyone, sealed them in Thanostones and plonked them on Battleworld. Your task is to defeat the other players and hopefully Thanos himself!

The Mega Pack that I was sent came with 13 Battle Cards, an Attack Die, 13 Danger Tokens, a Danger Coin, four Heroes (plus cards) and two Thanostones. This is enough for two players, as for more players you’ll need to buy some Battle Balls for additional Battle Cards and Heroes.

I’ll try and explain the rules for Mystery of the Thanostones as best I can, but I read the instruction sheet five times and only think I get it. You start with two Heroes and seven Battle Cards. You roll the Attack Die and add that total to your Hero’s power - if it’s equal to or higher than the Battle Card, you hit. Otherwise, you miss. 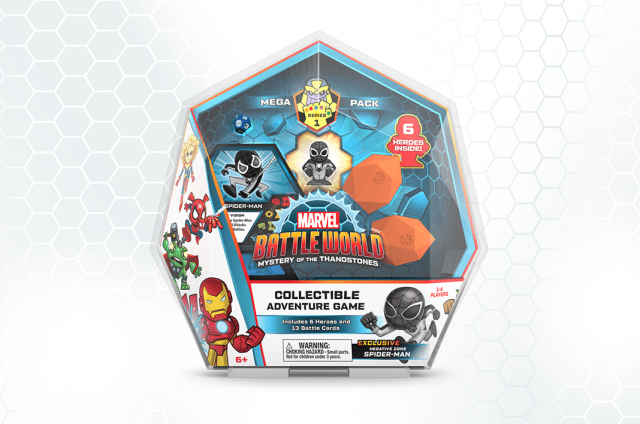 Hitting means that the character advances on the card. Depending on which Battle Card you made them attack, it could take one, two or three hits to defeat it. Once defeated, flip it over.

Missing, however, means that you have to place a Danger Token on the card. If you miss three times, advancing the token each time, you flip the card over and put the token on top of it. Lose three cards like this and it’s game over. It can be very easy to lose, actually, since after each turn you need to flip the Danger Coin - if it has the same symbol as the Battle Card you have to advance the Danger Token again. Similarly, the dice has a Thanos symbol on, which is an automatic miss, though the star symbol is an automatic hit.

So where do the titular Thanostones come into play? Why do you have these jagged orange cardboard things and cards in black pouches? There’s a chance you may never find out.

Which is where the game shows its Funko. There are 30 heroes in Series 1, and 60 Battle Cards, so this is clearly more of a collectible than a game. Especially since the game is designed to be easily played by a single player. The Mystery of the Thanostones Heroes look pretty good, to say they are miniatures they’re better detailed than some POP! Vinyls I’ve seen. The Mega Pack comes with stands that hold the Heroes and their Hero Cards, so you can display them. I just wish the cards felt a bit more stable in the slots, as I fear a stiff wind might blow them off of my shelf. Also, given the size of the cards they take up quite a bit of shelf space to say the figures are only 4cm tall, so there’s no real way to display them apart from in a line beside one another. Unless you have something for a line behind to stand on that’s going to clear 8cm worth of pentagonal card.

If you’re up for another collectible card game, but with figures, then you can’t go wrong with Marvel Battleworld: Mystery of the Thanostones. What’s more, there’s a mini-series cartoon that ties into it - or the game ties into the cartoon? Maybe it’s symbiotic, so if the game does well the cartoon will continue and visa-versa. It’s Marvel, there has to be a symbiote somewhere.

Cool looking game pieces with more rules than you might imagine.