Whilst using a controller for PC games has become much easier than it used to be, the input of choice for the vast majority of PC gamers is still the keyboard and mouse. With the ubiquity of this combo as a weapon of choice, it’s no surprise to see so many gaming keyboards hitting the market. The MK75 is the latest offering from Czech outfit Qpad, a relative newcomer to the market. I reviewed their pro gamer mouse earlier in the year and found it to be adequate but nothing special for the price, so how does this keyboard stand up?

My usual keyboard of choice is the Corsair K95 RGB Platinum, which costs about twice the price, but this keyboard seems to have the exact same Cherry MX Brown switches underneath the keycaps so typing on it is relatively similar. Whilst this is aimed at gamers, I can honestly say that I can recommend it as a typist’s keyboard for the price. It’s one of the lowest-priced keyboards with Cherry switches that I’ve seen. Brown is one of the less popular switch types, but personally it’s my favourite. This is something that’s very personal for everyone so if you can, it’s worth trying out the switches in a physical store to see if you like them.

Customisation options are limited but present

For gaming, we have full N-key rollover and anti-ghosting as you would expect nowadays, and QPad claims that the keyboard is made with aircraft-grade aluminium, although I can only assume that it’s internal as the casing is a smooth plastic finish. It’s not unpleasant, but it doesn’t feel as “premium” as some other keyboards. There’s a padded leatherette wrist rest included and this is quite comfy, but for some odd reason doesn’t connect to the keyboard, it just sits loose. I would have liked to see some clips or magnets to keep it in place.

The included software is nice, but Qpad’s relative inexperience shows within it. There are a few built-in RGB modes, and all are customisable, but not as much as on other keyboards. For example, there is per-key RGB customisation, but this is only an option when static lighting is used. You can’t have animations or set particular keys to a static colour while the rest of the keyboard is pulsing a different colour. 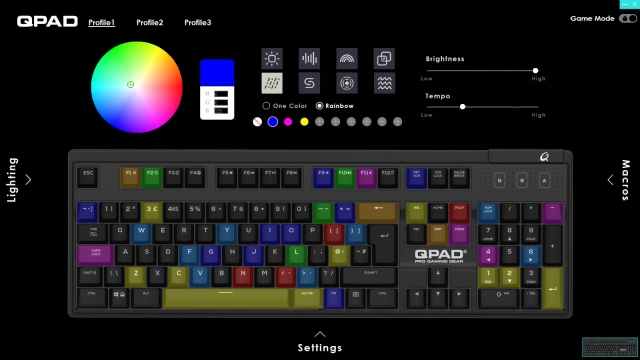 The software also contains a toggle switch that says “game mode”. When you click it, it changes colour. It doesn’t seem to do anything else and as Qpad doesn't provide any detailed instructions either in the box or on its  website, I couldn’t check what the toggle is actually supposed to do. I assumed it would turn off the Windows key or react to situations in games, but neither of those things seem to happen. There’s no way of triggering profiles when certain games or programs are launched. There’s a macro recorder as well, but as the keyboard has no macro keys, this only really serves the purpose of remapping normal keys in the event you might need to.

As well as a lack of macro keys, there are no dedicated media keys. There is an Fn key like you would get on a laptop and pressing this and the F1-F12 keys control media, as well as allowing you to change the brightness of the RGB lighting as well as changing profiles. I feel like if I’m going to have to press a two button combination for these things though, I might as well bind them to CTRL, ALT, or SHIFT key combinations.

Please excuse the dust and coffee stains on the desk.

Despite the lack of bells and whistles, this is a solid keyboard. It’s not got the features that you would expect from a high-end gaming keyboard, and it’s not as cheap as a membrane keyboard, but it fills a niche for a low-priced mechanical keyboard that is decent for gaming and very comfortable for typing. If you need a keyboard that provides a compromise between work and gaming, this is a good one to look at.

It’s not hugely feature-rich, but this is one of the lowest priced keyboards I’ve come across with Cherry MX switches. As a result it’s really nice to type on. Some macros keys or real media keys would have been nice, but at this price point, I’ll let it slip.