“Efficient simplicity” are the words to describe ROCCAT’s Kone Pure Ultra gaming mouse. Where many hardware manufacturers wave their flags atop the ‘bigger and brighter is better’ mountain, ROCCAT has instead opted for the minimalist approach with an ultra-lightweight mouse that eschews the ‘alien technology’ aesthetic—with all those flashing lights, switches and doodads—for refreshing and stylish simplicity. The Kone Pure Ultra is a mouse that, above all, does a job and does it well with no fuss.

66 grams—about the same weight as a tennis ball—sounds too light for a ‘proper’ mouse. Any piece of equipment that lightweight runs the risk of feeling cheap and hollow: less like a piece of high-end tech, more like bargain bin junk. Fortunately, the Kone Pure Ultra avoids this with a reassuringly high build quality in all aspects other than its airiness. Each input (left/right-click, thumb buttons, sensitivity buttons and scroll wheel) feels sturdy without being stiff; there’s certainly none of the springiness that cheaper mouse buttons suffer from. Its smooth matt finish and perfectly ergonomic design is irresistible too—almost silky to the touch. My only complaint, and this is completely down to preference, comes as a result of the colour-changing LED ‘ROCCAT’ logo that sits about where a user’s palm would be. I feel that the garish light detracts from the effortlessly pure qualities of the mouse, although this is hardly a deal-breaker; in fact, I’d wager that most people would regard a little flashiness as a positive. Regardless, with some fiddling around in the ‘ROCCAT Swarm’ utility, this light can—mercifully—be switched off. The Kone Pure Ultra comes packing an “Owl-Eye 16,000dpi optical sensor” with “50G acceleration” and “adjustable lift-off distance”. At least, that’s what it says on the box. I’m not able—or particularly willing—to verify those claims, but I can rattle off a few layman-friendly words on how damn good this mouse feels in action. After several days of regular usage, including one or two lengthy work/play sessions, my hand felt none the worse for wear: no cramping or discomfort at all. In comparison to the cheap and not-so cheerful mice I was used to, this was like a gift from the heavens; a glimpse at what mice were meant to be. Imagine going your whole life wearing each shoe on the wrong foot, before finally, after decades, getting it right and basking in the comfort that everyone else must have been taking for granted all along. Okay, maybe this is an exaggeration, but don’t let it distract from my point: the Kone Pure Ultra feels good and performs marvellously. 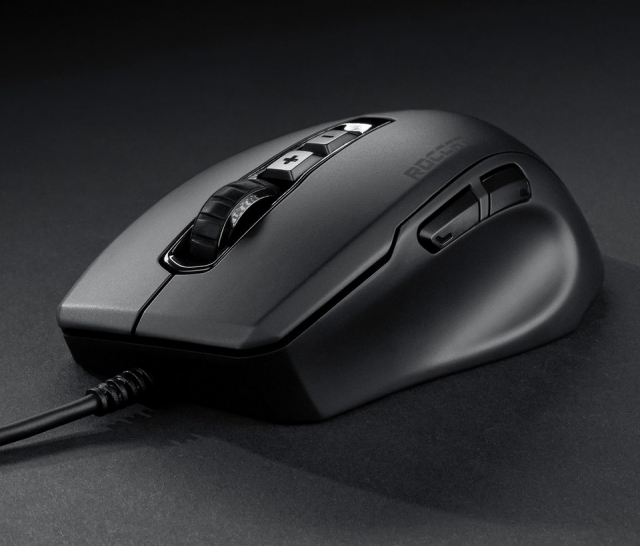 Considering how this is a piece of tech that champions simple functionality over excessive features, it’d be inappropriate to endlessly prattle on about the subtle curves and contours of the Kone Pure Ultra for much longer. ROCCAT has created a mouse that does a single job incredibly well in a world full of mice that try—and fail—to do several. For that, it gets my approval. If you have £60 to spend on a mouse and, like me, prefer gaming tech to be relatively discrete, you can’t go too far wrong with the Kone Pure Ultra.

Efficient and simple: ROCCAT's Kone Pure Ultra is a mouse that, above all, does a job and does it well with no fuss.