The ROCCAT VULCAN 121 AIMO keyboard is a pretty number, when I was shown the picture I just had to have it. As my last one was the HyperX keyboard that I reviewed three years ago, I thought it was time to get something new.

Inside the box it had the keyboard with the cable attached, palm rest, the quick-installation guide, disposal information and some stickers. As I unplugged my HyperX I took the ROCCAT VULCAN 121 AIMO keyboard out of the box and I sized them up against each other. The VULCAN is slightly bigger than my previous one, so I thought it might take up more room on my small desk, turns out it fit nicely once it was plugged in. 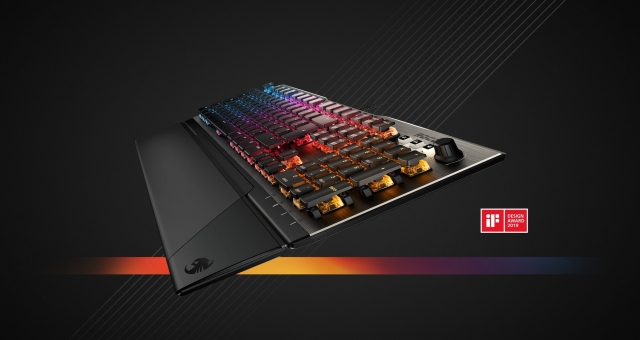 I loaded up my PC and went straight to the ROCCAT site to download a program called ROCCAT Swarm, that lets you customise the keyboard. As this was the first time I ever came across the program, I checked it out. At the bottom there are Gamer Profiles, so I went to Micro Manager and it has profiles already added for games like Borderlands 2, Tom Clancy’s Rainbow Six Siege, Fortnite and many others. Although I don’t use a keyboard for playing games as my hands are too small to do many things on it, so I use a controller, so I didn’t use any of the profiles.

As I was looking through the program and learning to understand it, I looked through all the options under Key Illumination and noticed you can change the patterns from Wave, Snake, Ripple FX and a few more. Choosing Snake, Ripple FX or any other pattern you can change the colours to your desire, but on Wave it is rainbow colours only. Once you have chosen your pattern you can choose how fast or slow you would like the colours to run through your keys as well as how bright you would like it. I decided to go for Wave as it lit up my keyboard in rainbow colours, and I turned the brightness up all the way.

Since the palm rest is magnetic, it really helps to clear up some space. I like to do crafty bits now and then, so it’s a really handy feature, as it means I can just take it off whenever I want, instead of taking the entire keyboard off of my desk. 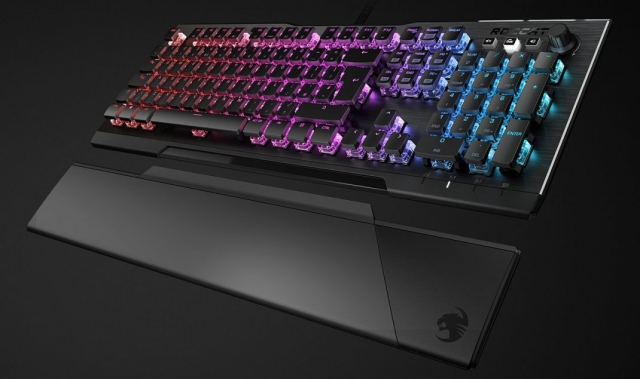 When it started to get dark, my two youngest children pointed out that my keyboard made a rainbow pattern on the ceiling and wall nearby. I found that even with the brightness down you can still see the pattern, so if you like to light up your room without an actual light, this keyboard is a must-have.

Overall I like the ROCCAT VULCAN 121 AIMO for its quietness. It is also beautiful when it is lit up in rainbow colours running through every letter, and even when the lights dim after being left alone for five minutes it still looks pretty.