I haven't used a massive amount of joysticks in the past and at times have struggled using them, so when STAR WARS: Squadrons was announced I thought it was about time I invested in picking up a joystick. Not wanting to spend a fortune on a joystick, I had a look around to see what was on the marketplace, I was trying to budget around the £70/$70 range, but the truth is I had no idea what I was looking for.

When looking around, I could see that having a larger throttle would be beneficial and my attention got drawn toward the Thrustmaster T.Flight HOTAS range. So when Thrustmaster got in touch and offered the one of the T.Flight HOTAS models, I thought this would be a perfect opportunity to try it out. Another thing which really appealed to me was that you could separate the throttle from the joystick (there is still a wire between the two) and I liked the idea of having these either side of the keyboard. With some games requiring you to use a keyboard as well as the joystick a fair amount, I felt this would definitely be beneficial for me. 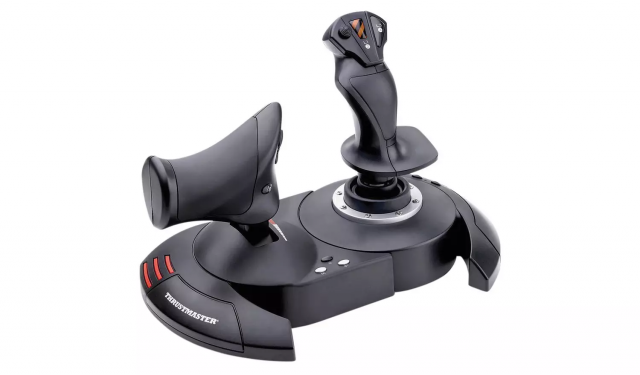 These are all compatible with the PC, and since I didn’t need it for any console use, I picked the T.Flight X as it would have suited the budget I was looking at in the first place. There is a little switch on the back of the joystick which allows you to select which platform you are using. Make sure you remember to switch it to the right platform beforehand!

Upon opening the Thrustmaster T.Flight HOTAS X I was pleasantly surprised with the quality and weight of the product, especially with its price range being what I’d consider as a budget joystick. It really feels like you are getting much more value than you are paying for. 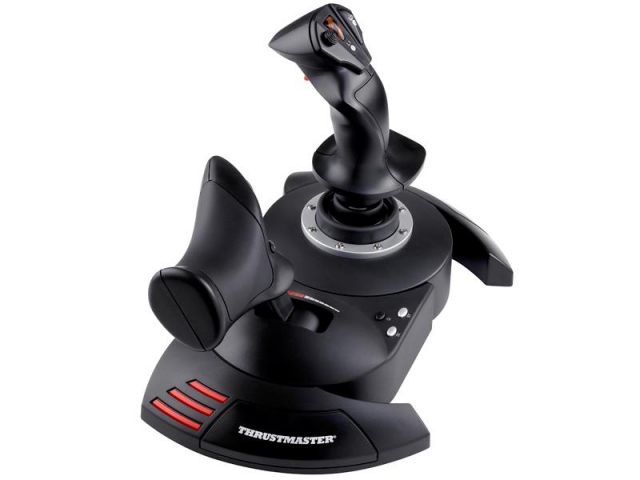 There were some of the assumptions I made which were incorrect. The first being when I separated the joystick and throttle, I was a little disappointed with the length of the cable, initially thinking it didn't reach either side of the keyboard. However, after a couple of games I investigated this further to find the cable was wrapped around the underside of the base. Once I undid the cable, the length was more than enough for what I required.

My second wrong assumption was with the stability of clipping the joystick and throttle together. To begin with, I found it very unstable and wobbly, however, after remembering my first mistake, I took a look underneath the base to find there was an Allen key/hex key attached to the bottom of the base. Removing this allowed me to tighten and lock the joystick and throttle together, stopping all of the wobbling I was getting.

Lesson learnt from this point onwards: always read the manual.

When using the T.Flight HOTAS X on Windows 10, it required no drivers or installation - I just got it out the box and it worked! It is worth checking the calibration within Windows itself, nevertheless, but this is very easy to do.

In my previous experiences with using a joystick, they always felt very unstable on the desk. I encountered issues with previous joysticks sliding and slightly tipping over when you pull backwards too hard on the joystick itself, but I have not had this happen to me with the T.Flight HOTAS X at all, which in return I have felt has helped improve my gameplay.

Just to test my theory I have swapped multiple times to keyboard and mouse in Star Wars: Squadrons and found that my gameplay was as bad as I expected. Whilst keyboard and mouse can be used for a lot of flight games, I found the T.Flight HOTAS X made the maneuverability of any ship a lot smoother for me. 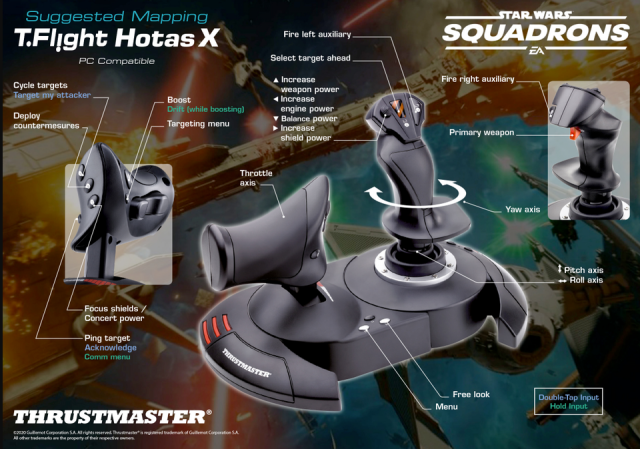 On the underside of the base there is an adjustable tension control for the joystick itself which I found very handy during set up to mess around with this control dial. There is a very convenient button on the top of the base for switching between the four or five axis control, and the button lights up red or green to let you know which one you are using.

The joystick has a total of 12 buttons and it has a nice feature which allows you to remap the buttons to your liking. Whilst I did not have a use for this, the instructions for remapping are in the manual (see, I am learning).

My gameplay has changed for the better using the Thrustmaster T.Flight HOTAS X. Even down to simple things like using the rocker button for adjusting shields from front to rear really quickly mid-battle was very useful.

As a disclaimer, I am by no means an experienced or decent player in flying contraptions, so when I say has made me better, this does not make me an elite god while gaming. It just means I can fly without crashing every two seconds… My future plans are also to use this in games such as Elite Dangerous and War Thunder. I mean, it’s not like my gameplay could get any worse in these types of games.

You can find a link to a PDF download of the manual here.

It is a very strong and stable joystick with a lot of options which would help it to be used in many other games. Responsiveness of the joystick is great and with a lot of customisation available if you wish. 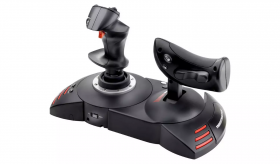