The Trust brand is well known for producing low cost budget accessories and the Trust GXT 830 RW Avonn Gaming Keyboard (which is a mouthful) is a cheap and cheerful gaming keyboard. As such, it’s a relatively straightforward membrane design rather than using mechanical switches. That being said, it does have a nice solid response with a short travel distance that feels nice to type with. 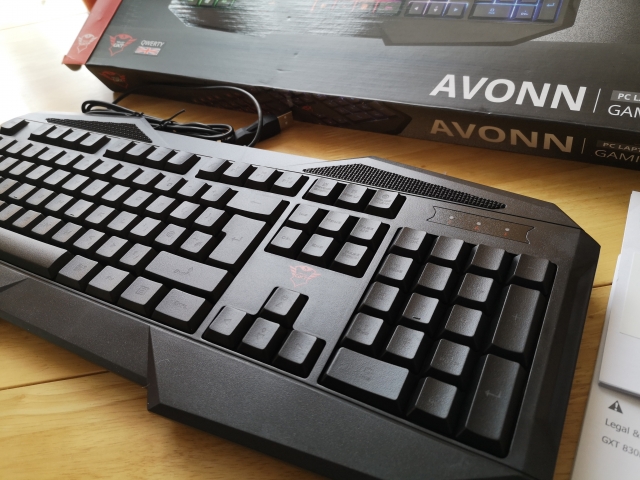 The design has that slightly futuristic angular design popular with gaming peripheral manufacturers and it houses a full-size layout complete with multimedia and extra functions mapped onto the function keys, which are accessed via an “FN” button that has been fit in next to the right AltGr key.

This key is also used to enable “Gaming Mode” which just means that the Windows key is disabled so you can’t accidentally pop yourself out of a fullscreen game or accidentally open the start menu. Pressing “FN” and the Windows key toggles this but there is no LED or other indicator to let you know it’s on.

Alongside “Gaming Mode” the main advertised feature is the anti-ghosting support, which allows up to six buttons to be pressed without losing the input. This works as advertised and I had no issues combining the important keys around the WASD cluster whilst getting murdered in Fortnite and as I struggled against demonic hordes in DOOM (2016).

As a budget keyboard it doesn’t house USB ports and the plastic doesn’t really have a premium feel to it, because of that it is also pretty lightweight, coming in at just shy of 700g. The rainbow illumination is fixed and can’t be toggled to a single colour so if you don’t like the rainbow effect you are out of luck. It can be set to phase in and out as well as to be toggled off completely and it can also be set to three levels of brightness. 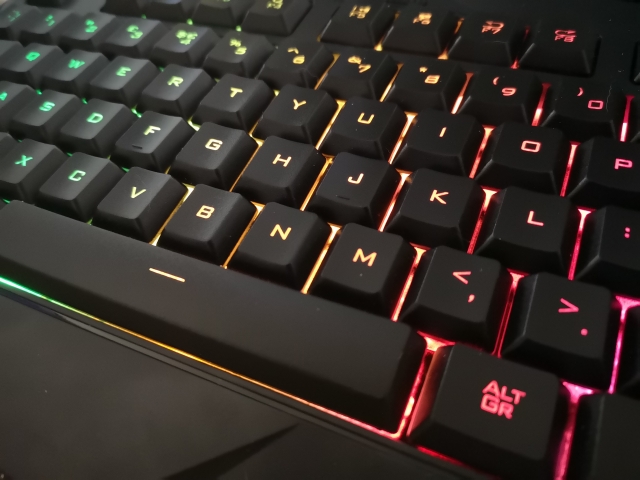 For what it’s worth, the illumination is visible quite clearly around all key edges and does a good job of leaking through the lettering on the keys. It’s definitely an effect you either love or hate however.

All in all the GXT 830 RW Avonn Gaming Keyboard does exactly what you’d expect for a budget gaming keyboard. It won’t win any awards but it works as advertised and feels fine to use.

A perfectly serviceable no frills budget gaming keyboard that has a nice feeling key response and ghosting protection that works well.

Worst keyboard ever... Get one from a shop for 5$ and will run better 50% of the keys don't work when I press space (or other away around...) If you hold W you can't jump at the same time

Sorry you've had issues with it, it does sound like a faulty unit for sure. FWIW the review unit I used is still working perfectly fine and has no issues with ghosting. I can only review something based on my experience with it but I hope the issues you've had aren't widespread.