Yes, I’ve taken it upon myself to review another Angry Birds title. Like Angry Birds Transformers and Angry Birds Stella before it, I couldn’t help myself - but this one is different! Okay, yes it has avians whom are slightly miffed; a slingshot is involved and pigs are totally the bad guys… But you hold the mobile device portrait, not landscape!

I imagine you were hoping for a major departure from the series - because an RPG and a karting game aren’t your cup of tea, perhaps - but it’s not a massive one in many respects. However, the type of game is a new one (for the franchise), if not an original one: match three or more bubbles to make them pop.

Complete honesty - my wife watched me play and asked if it was like Bubble Witch Saga. I said “No, it’s very different. It’s got Angry Birds.” - she sighed and told me it was exactly like the King games. Admittedly I’ve not played those as I disagree with King’s business practices, but she has and everything I listed to her she replied with “Same". The powers, the level types, the level select... 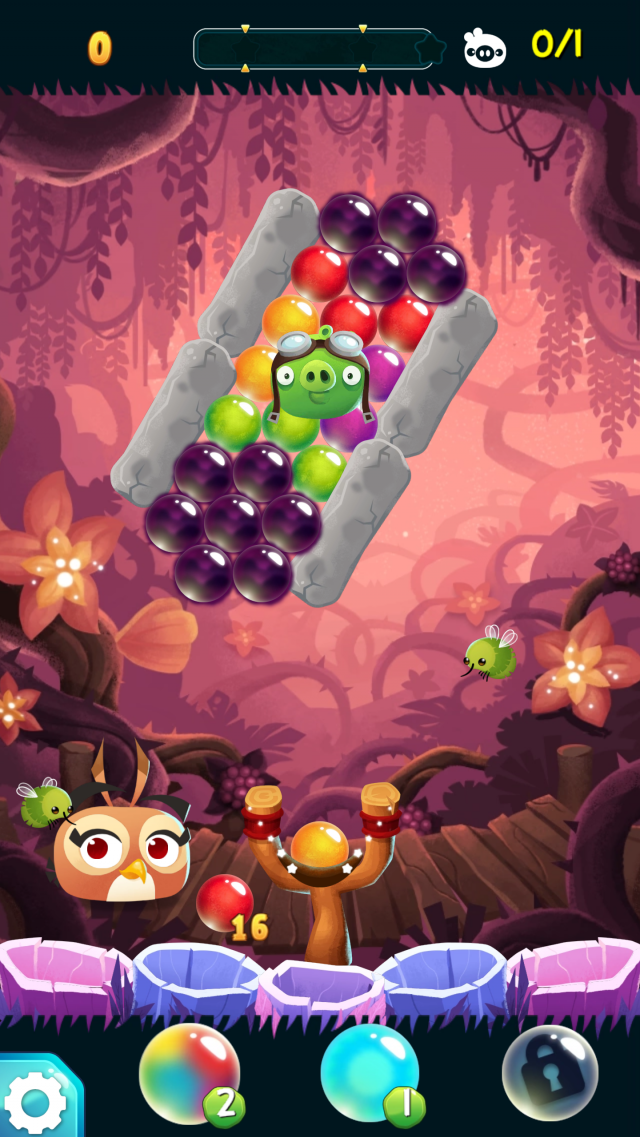 Bubble shooting games aren’t a new concept, of course, so let me list the types of levels you come across. Each type features either Stella or one of her friends, who can use a power if you get a combo of matches. Stella’s levels have a limited amount of bubbles and you have to knock all of the pigs down, or pop six of the top row to release fireflies - her power-up lets her burst an amount of bubbles in a set blast radius. Dahlia’s (the orange one) ones see you popping pigs by bursting all of the bubbles and obstacles around it, again with a set amount of bubbles to launch but her power is to pop all the bubbles of a single colour. Willow (the purple one) has to free critters from bubbles by bursting those around them, her ability being to change a radius of bubbles to one colour. Poppy (yellow) has an unlimited amount of bubbles, but a time limit to get rid of all of the hanging ones - her power I’ve found most useful as it pops a whole row of bubbles.

The final level type involves Queen Gale - the main villain in Angry Birds Stella. You have to pop to the top with Gale using her power to cover the bubbles in a black fog whilst you only have a limited amount of to use - knocking a fog-covered one clears it back to its original colour. This is the rarest level type, as I only encountered one in the first 30 levels, however after the initial encounter there is fog over the bubbles on all levels to amp up the difficulty. As you should be able to tell by now, I'm a fan of Angry Birds. I don’t really care about the sheer density of ads present in all past titles, but they are curiously not in POP!. The game is F2P, as with most Rovio titles, so I expected a ton of video adverts for Robinsons Fruit Shoot and YouTube channels. But there are none - this is probably because you have five lives and the in-game currency of gold coins are only obtainable by buying them through in-app purchases, after using the 50 free ones it gives you. Gold coins are used to buy more lives, five extra bubbles or 20 seconds (depending on the level) to help solve a level, each costing a different amount.

Lives automatically regenerate, with one every 30 minutes, though as well as IAP you can request them from your Facebook friends. If you win a level you don’t use up a life, just like other videogames and not what I expected. Facebook integration also allows you to bypass Pig Walls - send requests to three friends for help and you get to skip the 24 hour waiting period before you can progress. The optional IAP notwithstanding, I really only feel let down by the stars. As is Angry Birds policy, finishing a level gets you one, two or three stars depending on how well you did. However, in past games it’s always been skill more than anything, that affects how well you do. In POP! it’s more of a case of luckily getting the right bubbles, and the fact that the balls change colour with every playthrough means your strategies are always on the fly.

POP! is another addictive addition to the Angry Birds franchise, though if you play bubble popping games a lot you won’t find much new, and the fact it doesn’t appear to have a function for Telepods is strange to me. There are already Stella Telepods, after all.

POP! is another addictive addition to the Angry Birds franchise, though if you play bubble popping games a lot you won’t find much new

I will admit that I wound up uninstalling the game a few months after this review, when it got to the point where I couldn't continue without INCREDIBLE amounts of luck.