In a year decorated by memes, loaded hashtag movements, and turbulent politics, it's a smart move to release a political satire like Dear Leader. It's with effortless irreverence that Uglysoft plucks North Korean leader Kim Jong Un out of his dictatorship for a refreshing breather in the digital wilderness, where things like nuclear annihilation aren't really important, but the demonic presence overtaking Mount Paektu is. The HMS Gratis versus Libre truly sets sail as Dear Leader dials up the ridiculous meter in the most incongruently satisfying way. Sadly, I can't voice the same level of appreciation for its most basic controls. 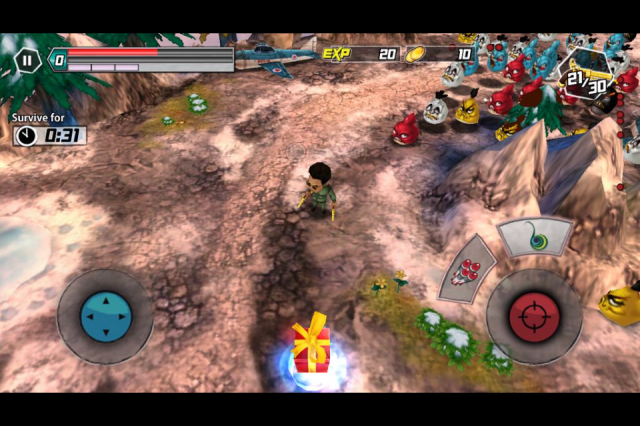 Dear Leader does what F2P mobile games do best. It grabs your attention with an intriguing, gimmicky premise, acquaints you a levelling progression hook, and crams in tons of collectibles and unlockable weapons to keep you busy. The artistry poured into the game assets and characters - which boast the likes of Barack Obama and Kim Jong Un's father - is decent, but the movement system feels like a rushed, clunky mess.

Playing on iPhone 6 (it crashes on iPhone 4) didn't seem to make a difference to the jerky twitching that impeded my ability to shoot straight at waves of enemies, which was both frustrating and puzzling; shouldn't your character fire in the direction you point and drag him in? 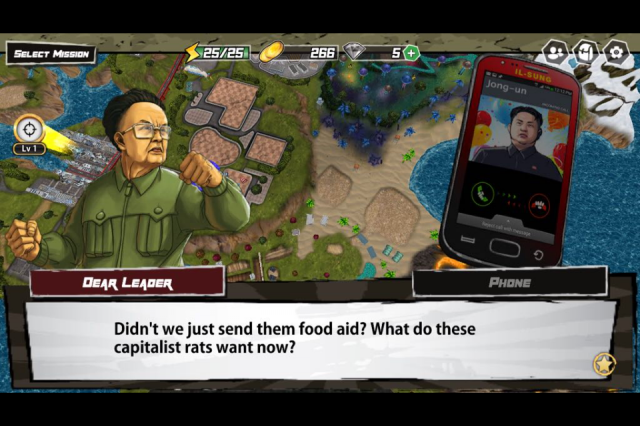 Forced to adopt a creative, runaround approach, I ploughed through the first timed mission, finding a sliver of enjoyment in obliterating 100 multicoloured monsters for a reward of XP, some Korean Won, various magical jewels, and a silver diamond. There's good incentive to collect jewels (wind, fire and water) during each stage, since they boost your XP quicker and fast-forward your journey towards affording more powerful weapons (such as hammers and sickles) with enhanced firing and damage rates, but the repetitive structure quickly strips away any chance for gameplay to become compelling.

Mission two reworks the monster horde theme, then jazzes things up by making it an escort challenge, where you'll be greeted by the hilarious sight of Kim Jong Un guiding schoolchildren towards a fluorescent circle of safety while fending off demons. And yet, aiming at them with your sacred gun is far more difficult than it needs to be. Were it not for the assistance of homing missiles I'd say it's downright excruciating. 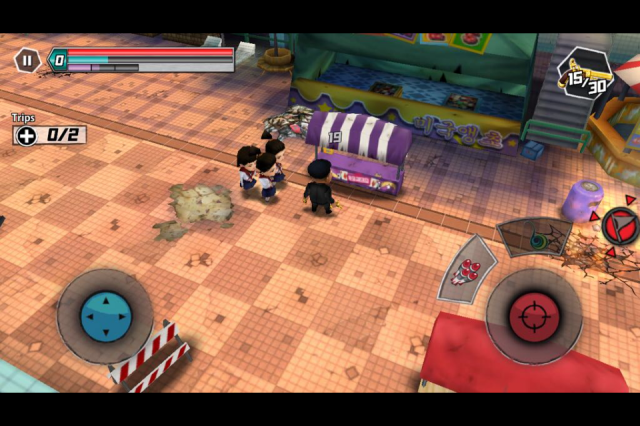 Subsequent missions introduce a temporary healing spell (represented by a giant feathery peacock), which is apparently possible thanks to ancient Korean magic, and a feature I was extremely grateful for considering Dear Leader's kinaesthetic issues. But in retrospect, it's because of them I found defeating the first boss so rewarding. The main objectives seem to repeat with little change, so you're in for a long grind if you want to level up to a respectable position.

A ridiculous, well-conceived political satire, Dear Leader is ultimately let down by shoddy, disorienting controls, which impede movement and accuracy on a fundamental level. Despite this, the image of Kim Jong Un sipping a boysenberry thickshake is an image I won't be able to erase from my mind for a long time.

Dear Leader is out now for free on Android and iOS.

Wonderfully irreverent satire held back by clunky controls and grindy, repetitive mission structure. Dear Leader is a smart, well-timed release that will appeal to those with their fingers on the pulse of politics, but only for so long.

A keen retrogamer who grew up playing classics like Prince of Persia, Aladdin, and Diddy Kong Racing