It’s time to fulfill your dreams as mayor of a city, let’s go! Oh My Mayor: Touch in the city 2 may have an odd title, but it basically covers the bases. You are in control of a city in this screen-tapping game, and there is virtually nothing more to the title than that. So let’s get into this new mayoral adventure. 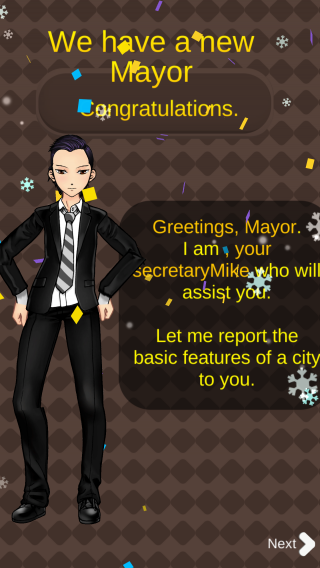 Created by Korean company Tikitap, this game hit the Android market on December 17th, so by new we mean pretty dang new. Oh My Mayor was made using the Unity engine and was kept pretty simple, focusing on the basics of a mobile game. No resource management, no real time management either, just tapping the screen for the buildings or vehicles your town needs to grow and that’s that. Very simplistic. All the while your kinda kawaii anime-style secretary, Mike, tells you how you’re doing, more or less.

So what you tap on are circular icons in a toolbar along the bottom of the screen. There is a tutorial in a sense, but most of it you kind of piece together by yourself. Fortunately, like I said, it’s not complex. So with some knowledge of games, it can be done. The toolbar has houses, vehicles, power ups, other secretaries that you can purchase down the road, and a map of other cities. I have a theory that you can purchase these cities down the road going off of the numbers beside them. All in all Oh My Mayor is a very back to basics game that will pretty much take all of your attention. Not because it’s challenging, because it’s your basic screen tapper. This goes back to the days of Cookie Clicker in basic action but with a bit more premise as you are trying to make your city grow by building more homes to add the population and bringing in more vehicles. Why? Because you’re the Mayor! I realized after a bit to pay attention to the numbers in the corners of the items you’re working on, especially the vehicles, to max them out as that seemed to be important.

All in all, for what Oh My Mayor is, it’s good. It’s addicting and quick to load, and if you have a child, about five and up, let’s say, who needs a good distraction, this is great, as this game is rated E for Everyone. There are ads, but they seem to mostly be triggered when you click on little presents that float by, meaning you get rewarded for watching them. That’s something I always appreciate, when a game that includes ads at least rewards you for dealing with them. There are also bonuses and power ups that can speed things up. To be honest, I didn’t seem to need them while I was playing it, they might be helpful further along. 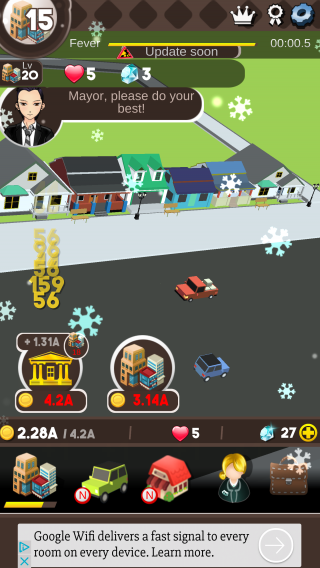 For a fast paced screen tapping title, this is a good way to go. There are some language issues, as sometimes I was confused if I was supposed to let my secretary rest somehow or something. He kept telling me he was tired, but that didn’t seem to mean anything. Having to figure out most of the game yourself can put some people off, but I consider it an interesting challenge. Figuring it out wasn’t too hard, and in the end, it was fun. It did seem like it might be a bit of a battery drainer on my LG V-10, so I would also recommend keeping an eye out for that as well. All in all, though, Oh My Mayor: Touch in the city 2 is worth a try and certainly a good time filler.

If you're looking for a fast paced screen tapper that will quickly get you addicted, this is the game for you, especially if you have a lot of time on your hands. This game will absolutely make the time fly, even if there doesn't seem to be much story.