Long ago, the Demon King was defeated, leaving people in peace. Those peaceful days are over, it seems, as monsters have started to appear in the world again. It’s up to you and your friends to stop them, it’s time to live a Rogue Life.

That is the general plot in this fantasy RPG by developer HIDEA. According to the Google Play page, Rogue Life is intended to be a crossover between RPGs and bullet hells, sending you and your band of mates into a “barrage of bullets, projectiles and missiles”. Though since this title is intended for ages 10 and up, the bullet hell portion isn’t quite to the level of games such as The Binding of Isaac.

This Korean company uses an adorable art style and chose to go along the lines of the old Legend of Zelda games, using generic sounds for when the characters speak. The characters are very endearing, given their own individual personalities that you get to know more and more. There is a very in-depth tutorial which is good and bad as it’s very long. The way it’s set up, you get to play the game between teaching moments, allowing you to still feel involved rather than like you’re reading a user guide. 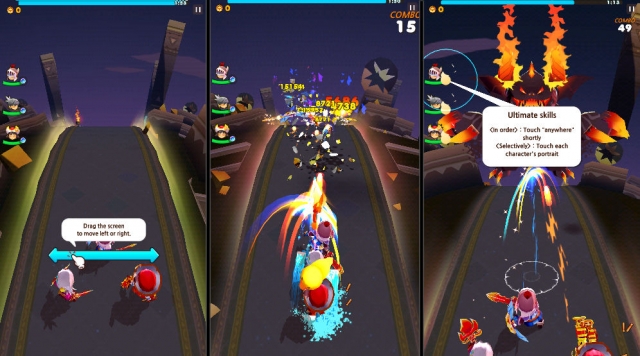 As I said before, the bullet hell aspect isn’t all that bad. For being on a mobile screen, it’s done pretty well. Placing your finger on the screen controls not just the weapons, but also the movement of the characters as the little warriors quickly stroll down a set path. For the most part, this is easy peasy, but it may be a major issue if the game gets more difficult. The problem? Your finger and hand block the lower part of your screen. That tends to be where the oncoming projectiles are going to land and it is a little difficult to see at times, no matter if you’re right or left handed. Thanks to the difficulty level, you don’t seem to get too punished for this. If that changes, though, I could see some issues arising.

One of my favourite aspects of RPGs is character building, and that’s the one thing this RPG lacks. You’re given basic characters and can earn or buy items for them, but beyond that there isn’t a whole lot of this feature. The items that you can use, such as swirly glasses that we normally see on clueless nerds in animes (I’m thinking Sailor Moon here, Gurio Umino aka Melvin Butlers in the original English dub). For example, the swirly glasses known as the Eyes of the Abyss ups your attack damage to a +20 per second, but also gives a very small (2%) chance of blocking incoming damage. So while you can’t design your own character, it’s nice that the items you can customise them with have attributes attached to them. 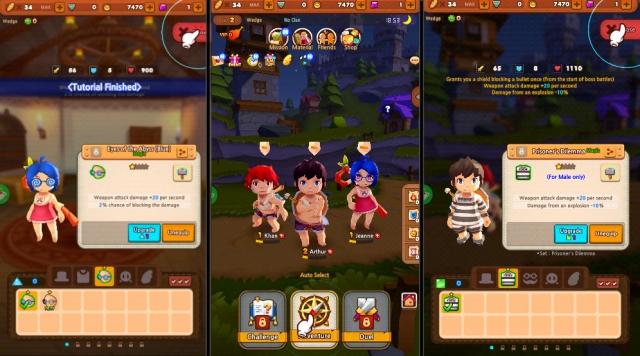 Rogue Life is a fast paced mobile RPG that will definitely keep your attention, it practically demands it. The mechanics are fairly easy, and if you’re new to RPGs, this would be a good place to start. It’s similar to Miitopia in its simplicity and is fairly innocent, so it’s great for kids to adults. If you would like to finally break into an RPG but you don’t have a computer good enough to run one, this is a great way to go to get your feet wet. Just be prepared for the fast pace and be mindful of incoming projectiles and you’ll be just fine.

Great starter RPG with bullet hell elements. Some drawback in playing style due to your hand partially getting in the way of incoming attacks and not much in the character building aspect, but otherwise a very good game that will definitely keep you busy.