Sonny originally released back in 2007 as a flash-based game, and it was followed up with a sequel shortly after. The series managed to gather a dedicated following and now, almost 10 years later, it’s been reimagined on iOS. I don’t have any experience with the original games, but if you’re a returning player you should know that it’s a completely new adventure.

The first thing you need to know about Sonny’s gameplay is that it’s on rails. Everything stems from a primary hub menu — you can’t move your character around and there’s nothing to explore. I understand that many dedicated RPG fans have issues with on-rails games and that this alone is often a huge turn-off. However, if you’re this type of player, please give Sonny a fighting chance. This in no way hindered my enjoyment of the game, and I’m not typically a fan of this design. All I can say is that it works surprisingly well. With that plea out of the way, let’s get to the goods. In a silly and unique twist, the main character — Sonny — is actually a zombie. The story follows Sonny on his quest to unravel the mysteries surrounding his sentience. It’s told through tidbits of dialogue between fights, with some scenes depicted in stylish graphic-novel style, and it doesn’t have any cringeworthy stumbles. It’s a refreshing change from the typical cliched RPG storyline, but don’t expect deep character development or exciting plot twists. Enjoy it for what it is: lighthearted but engaging, the right kind of corny, and a way to drive you from one fight to the next.

Sonny is very much a combat-focused game, and you’ll spend most of your time duking it out in beautifully distracting — though unfortunately animation-less — environments. Fights are turn-based, but they feel fast and furious thanks to a gauge-based system that determines when you can act. There’s another reason they don’t feel turn-based though, and it’s a double-edged sword: you can’t control anyone other than Sonny. For a game with so much focus on selecting the right characters and abilities for each situation, it’s somewhat frustrating that you’re unable to manage your other two party members. Even so, I was pleasantly surprised with my teammates’ target and ability use choices, and only occasionally wished I had direct control. I came to terms with this aspect quickly, but I know some players won’t be so keen to accept it. If you’re initially hesitant, I’d once again urge you not to make any abrupt decisions because there’s a deep and difficult combat experience on offer here. Sonny’s combat system demands a substantial understanding of both your enemy’s abilities and your own. For the most part, you won’t be able to steamroll through fights without paying careful attention to character build and ability use. You’ll face plenty of enemies that are nearly impossible to defeat without well-placed buffs and debuffs, so even though there’s an option to initiate random fights for more experience, it's usually not the answer.

Considering that, it’s a good thing you’ll have access to diverse skill trees. Sonny starts with a single base tree, but he receives an upgrade not far into the story that unlocks one of five additional trees, each focused on a single element. Fire, for example, emphasizes a brutal offense, while nature — the one I chose — is packed with defensive and healing abilities. Once you make this choice you’re stuck with it, but there's a convenient respec option that allows you to cheaply play around with different builds. You’re also introduced to an ability evolution system later in the game: an evolution gauge fills up with each hit that lets you augment abilities with effects like decreased cooldowns and bonus debuffs. You might not notice it during short fights, but selecting the right evolutions can make or break some drawn out boss encounters. The only downside is that it’s randomised, and once again I have to question this design decision considering the focus on strategic combat. Outside of combat, you’re able to visit the shop to upgrade your equipment. It refreshes with new items at the beginning of each chapter and you can buy as many as you want. Unlike with the skills, you’re able to equip all of your characters as you please. There’s the occasional piece of loot from tougher enemies, but otherwise you’re stuck with what the game hands you and there aren’t any consumable items. Sonny hits a basic level of equipment variety, and it helps that every piece of gear can be upgraded, but new items don’t feel exciting to equip since they’re usually just slightly better versions of what you’re already using. This portion of the game is perhaps the most underwhelming, and it’s compounded by the fact that equipment isn’t visible on your characters.

I have to admit that as I made edits to this review, I sometimes felt like I was making excuses for Sonny. I eventually realized that while there’s some truth to that, I did it for a good reason. Some points I touched on might irritate me in other games, but they didn’t here, and that’s saying something. The system just works so well. In fact, I’ll go as far as to say that I had a mini-revelation about what I expect from the RPG genre. I love exploring open worlds and diving into deep party management, but I think there’s room in my heart for games like Sonny too, and maybe you’ll feel the same.

Sonny's challenging, tactical combat, pretty visuals, and enjoyable story should satisfy any RPG fan — as long as you can get over the fact that it's on rails. 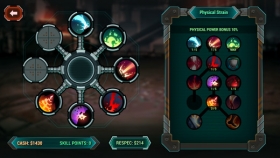