Tavern Rumble is a free game for Android by Evrac Gaming that describes itself as a Roguelike Deckbuilding Game. Instantly, you can see that it draws inspiration from other games: Slay the Spire, Magic: The Gathering, Hearthstone’s single-player etc.

And I have sunken way too many hours into it.

It is an addictive game that you could easily waste an afternoon, or more, on and is one of the least monetised games I’ve seen on the app store.

So... what makes it one of my favourite games to play at any time?

Well, let’s start off with its main game mode: Monsters’ Cave. The Monsters’ Cave mode is just like any other roguelike. You try to make your way to the end, fighting battles, gaining special abilities (called blessings) dealing with events and building your deck to tackle every challenge Tavern Rumble tries to throw at you. It’s simple yet well executed, although you won’t see a lot of different events. You’ll probably have seen them all by the third run or so. It has some nice features like allowing you to continue your run when you leave the game or have several runs saved as long as they’re in different classes.

The actual battling system is pretty easy to understand. It’s turn-based where you have a set amount of mana per turn that you use to pay to play your cards. Units attack enemies in front of them (unless stated otherwise) or the top-row, going down a grid, and if you are attacked in a row without something to defend you, you lose health. Spells are used to help you or hinder your opponents. If your HP reaches 0, it’s game over. The game will tell you what your enemy will do on its turn, maybe attack or drain life or attack every enemy in a row, so you have to plan how you use your cards carefully. It can be disheartening to figure out that there is no way you can survive the monster’s turn, but I like that. I do want perfect information, and while the game doesn’t reveal every move the enemy makes, it can lead to some very satisfying victories, hanging onto one HP as you take down the last monster (or even a boss) that would’ve ended your run if your units were just one attack point less. There are some annoying monsters that can absolutely end your run no matter how hard you try on your first turn, but that’s usually because of a poor starting hand and plain bad luck. 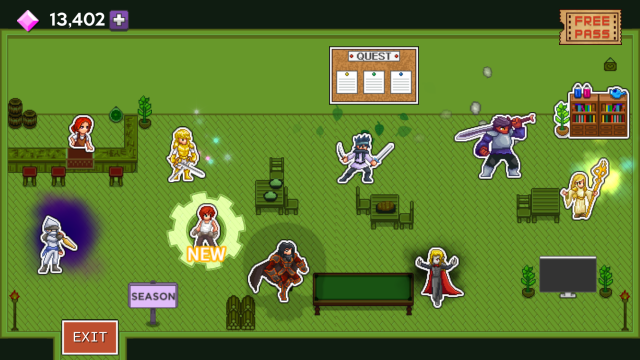 Your starting deck is determined by one of the eight (as of writing) classes available, which have their own card pools, where you’ll need to adapt to their wildly different playstyles. For example, the Hunter Guild focuses on drawing and discarding cards to gain advantage, while the Transylvania Family has low max health but makes up for it with plenty of units with lifesteal and debuffing opponents. This is just a basic description of some of the cards available for each class, but the number of cards in the pool can be increased by purchasing expansion packs with their own themes - some are available to all classes while others are class-specific. They’re fun to experiment with and see what combination of cards can allow you to break the game over your knee, like generating more mana than you need and then using that mana to essentially make all your units unable to die. However, there are some classes that are just better than others. The Roughrock Clan is one of the best, giving you access to powerful orange cards early and has blessings that will cheapen their mana cost, while the Void Community...just isn’t all that good, needing their equipment cards to actually stand a chance against early enemies. Once they get going, they get going, but there’s definitely a balancing issue with the classes, and some classes are way better at certain game modes than others. Don't use the Transylvania Family in the next game mode.

The second game mode is Lava Pit, which actually allows you to create your own card and use it, as well as a randomised deck, to get to the end. This one is just like Monsters’ Cave except it’s one long path, with nearly every space a fight, and you are rarely given the opportunity to heal, upgrade or refine your deck. It’s not a bad mode, and creating your own card is a novel concept, however it is dragged down somewhat by how you create your own card. The system is quite simple; the higher mana cost, the stronger the card and the more options for abilities you have available. That’s great. However, the abilities you can get can only be made available through a random roll. Want to make your card remain on the field for a turn? You only have a 1/150 chance of getting that ability. And it’s 200 gems per roll, when the going average is 100 or less per good run without watching an ad. You can deal with what you have but it’s still a serious grind if you want a specific ability or want to experiment with combinations. And finally, the third game mode is World Champion, where you’re supposed to protect a special unit that is summoned at the start of every battle as you fight against others who can pretty much do the same as you can; summon units to attack and defend. It’s like taking on another player. Now, champions come with their own special ability - both yours and your opponent - so you’ll have to plan your deck around it and deal with your current opponent’s champion. Oh, and you have to keep watch of your own HP as well. This is my least favourite out of the three. It’s just Monsters’ Cave, except without events and gets shorter after every part you clear. Also, the champion can actually be more of a hindrance than helpful, and some cards and blessings are just useless for this game mode. You think having summoned a copy of a champion at the beginning would help? Nope! It just helps end your run faster especially when it's on the front line.

Of course, any “free” game comes with ads and a premium currency that you can pay real money for: pink gems in Tavern Rumble. However, you don’t really have to spend a dime on it, or even watch an ad. They are completely optional. Ads are only played if you choose to, and they’re mostly available on runs where they may benefit you slightly in the next battle or reward you with something that may help you greatly, like giving you an additional blessing or more cards. And you gain gems just from playing the game and winning or losing runs and let me tell you, you will be doing a lot of runs. However, where it traps you is what it will take to unlock anything. Being able to play the other classes takes a few thousand gems when you can only make around a hundred if you win, unlocking a card pack is another few thousand and unlocking a new game mode takes 10,000 gems each. And again, you only get more than 100 gems after a successful run without ads. There are other ways to earn more gems: completing daily events or finishing runs with a certain level of modifiers on it. If it sounds like I’m exaggerating how much it will cost to experience the full game, I probably am. At best, you’ll spend £20/$30 for the additional game modes or all the classes if you’re impatient, but not spending real money or watching ads and you’ll be forced into a long and arduous grind to even unlock one class. 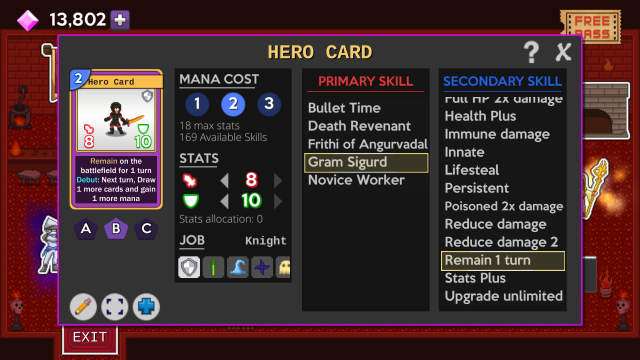 Now onto its technical faults. While this is very much a stable game, and will continue to improve as time goes on, I have encountered some glitches. Some enemies that can change positions will randomly move off the grid (maybe even the screen), or seemingly stay in place, and you have to guess what space the enemy is on. And in World Champion the enemy would not take their turn after I ended mine even after exiting the game, forcing me to abandon a run. Sometimes, however, the game might break in your favour. One blessing was supposed to only give my units more health for every spell I played for one turn. There might have been a small programming error because it let me keep the additional health for the rest of the battle, so with a little bit of work, my units would eventually have over 100 health when normal high health units have 10-15. It’s annoying, but not a dealbreaker as I’m sure that bugs like this will be patched out given enough time.

Tavern Rumble is a great time-waster that can provide entertainment for hours with unobtrusive monetisation. However, it has some balance issues, a few minor glitches that dampen the experience and the grind will be long and arduous for those who refuse to spend real money.