I’m sure that you’ve seen really cheap VR headsets around the internet - heck, they even sell one in the clothes store Primark. It’s basically a shell with a headband, so that you can hold your phone up to your face. Oculus and Vive had their time, with mobile displays getting better with every generation, and battery lives lasting longer, you don’t really need one even if you want to game on it.

Thanks to VRidge, you can launch any VR game you own on Steam, and connect through to your phone. Personally, I used a Samsung Galaxy S8+ in a Samsung Gear VR headset, but it works the same no matter your setup. You get the app on your phone, download the RiftCat client on your PC, and launch away. Just make sure to open the app before you plug your phone into your headset, and know where your gamepad is located. 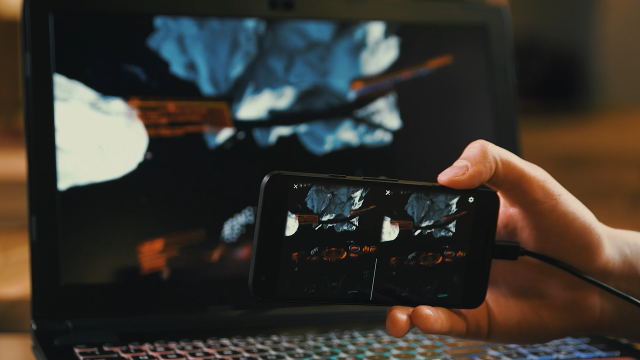 Once the RiftCat client opens, you can either connect through WiFi or USB. Launch the VRidge app (making sure it’s the right version to connect to the RiftCat you downloaded) on your phone and you’re away. Once you’re signed into RiftCat, you just have to click on the Play button, and it will open Steam’s VR mode.

I won’t go into the nitty gritty of setting up your virtual Steam room, because as long as you can guess your sitting height pretty well, you’re set. Honestly, I couldn’t find a way to do anything actually inside the room, so I had to lift my VR to start games.

After trying four games, and having previously played a game using an Oculus Rift, I can say that VRidge is really quite an achievement. I never noticed any lag in visuals or controls, despite being connected through WiFi. The graphics were impressive to look at, and I tested it with both the S8+ and the Galaxy Note 4. The only issue is with text. 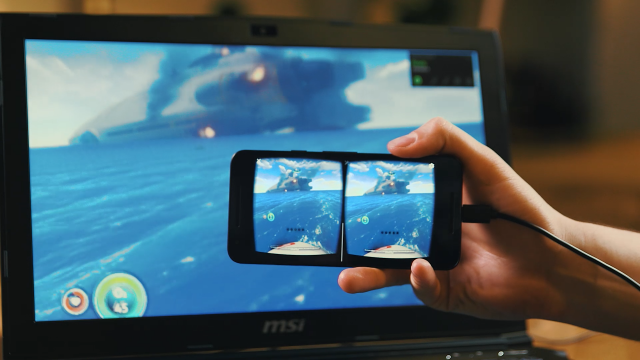 Elite Dangerous has a lot of text, and all of it was blurry. Even adjusting the Gear VR, I couldn’t get it in focus. I didn’t have that problem with House of the Dying Sun, however. Maybe because most of the text is closer to you? The cockpit is smaller, after all. Similarly, I could read everything in Race the Sun, but the menu text is quite a bit larger.

The final game I tested out was Knee Deep. Unfortunately, despite looking great, I couldn’t work out for the life of me what controls it used. It didn’t recognise my DualShock 4, flight stick or keyboard and mouse.

VRidge is pretty much the only app available to play Steam games on your off-brand VR headset. They haven’t rested on their laurels, however, as the app works really well. Graphical fidelity is high, it’s easy to use and explains each step… If you have a phone-based VR headset, then you should definitely check it out.

VRidge is practically a necessity if you plan on using an off-brand VR headset. It works pretty effortlessly, and the graphical fidelity is high. Definitely worth a look, if a little pricey.