The latest video game to bring the Warhammer universe to life for fans new and old has come in the form of Warhammer Age of Sigmar: Realm War. This new title gives players a chance to experience real-time 3D battles where they command powerful units all within the palm of their hand. By using a deck of unit cards to summon warriors to charge at the enemy the title aims to offer a compact real time strategy gaming experience that leverages the source material in a dynamic way. Then again, being on mobile devices, does the title have enough to make it worth keeping on your phone?

As mentioned, the gameplay within the title requires players to build a deck of units that they will take into battle against other players. These cards each represent a different unit or hero and have their own abilities and attributes that impact their performance in combat. As you collect new cards and copies of existing ones you’ll be able to level them up and create stronger units that are more capable on the battlefield. As each card has a different cost requirement it is important to balance the power of your deck against how often you can get units onto the battlefield. 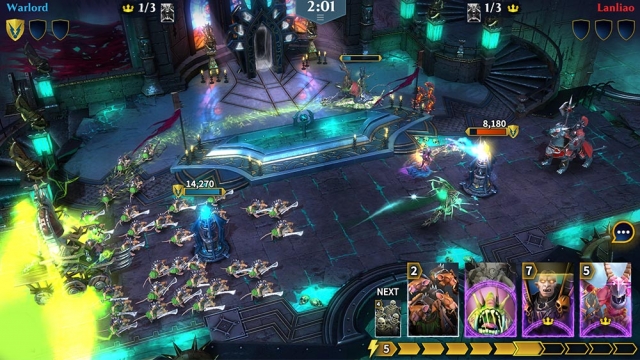 When actually in a battle players will need to think fast and carefully to claim victory for themselves. As the energy meter fills it can be spent to bring a chosen unit onto the field by simply dragging it and then picking a position. There are two lanes on the battlefields that provide options as to how to approach the enemy. Additionally, should a player send hero units down the top lane and passed the door way they can summon a powerful unit that might just turn the tide of the battle. Of course, your enemy can also go for this so it is a race as much as it is a fight.

This core gameplay look is carefully crafted to ensure that players of all experiences can jump right in and the lightweight tutorial provides enough guidances without overstaying its welcome. On top of that the user interface within Warhammer Age of Sigmar: Realm War is easy to navigate and is ideal for a mobile touch screen device. Now being a mobile title of course there is the option to drop real money to gain boosts and currency that can help you progress and earn new cards. Thankfully, you’ll never feel pressured into doing this and playing the title without dropping any real money is deeply enjoyable. Adverts are present but often they are optional as a means to double your rewards, which is a nice feature to have. 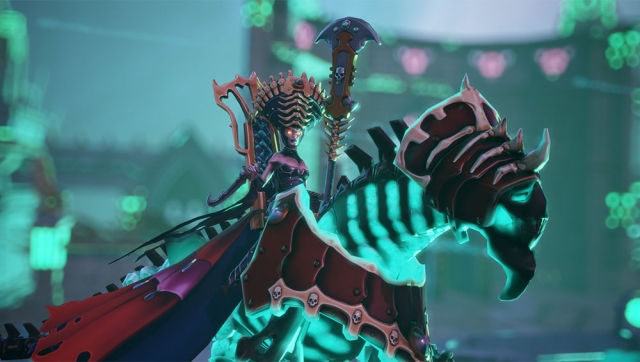 In terms of presentation Warhammer Age of Sigmar: Realm War is a beautiful title that is a treat for the eyes on both iOS and Android devices. Players will be able to enjoy a spectacular display regardless of their platform but those on supported iOS devices can use an impressive augmented reality feature to see the battlefield in an even more immersive way. Though performance is solid as well during even the most intense moments of combat the title does hit hard on the battery life of your device, so make sure to keep an eye on that.

At the end of the day, Warhammer Age of Sigmar: Realm War provides a solid and enjoyable gaming experience that is similar to the likes of Clash Royale all be it with attention to detail for its source material. If you want to enjoy more Warhammer or a real time strategy title on mobile then make sure to have a look at this one as it is definitely worth checking out and maybe you’ll stay for the long haul.

Warhammer Age of Sigmar: Realm War is a solid mobile gaming experience that keeps true to the source material that is worth checking out.