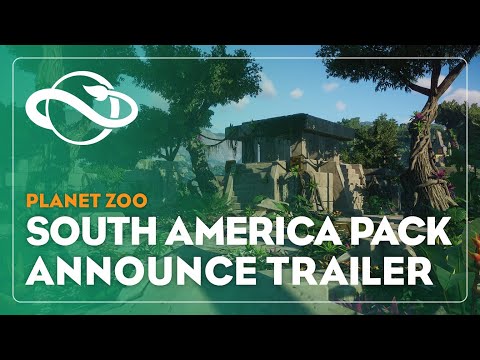 The second paid DLC for Frontier Developments PLC's Planet Zoo is set to release on Steam 7th April. In it, players will see their zoo infused with the influence of South America: new animals, buildings, scenery pieces and foliage types are on offer, giving players even more freedom to create the zoo of their dreams.

Five new animals are set to give the existing lineup an exotic flavour: Jaguars, Capuchin Monkeys, Giant Anteaters, Red-Eyed Tree Frogs and Llamas will be found mingling among the existing animals. Of course, new animals from a new biosphere will have completely different requirements in order to thrive. Research will be required to ensure the animal's various individual needs are being met.

The aesthetics of a zoo are important too; with all manner of "lost civilization" scenery items and scenery types likes bamboo and thatched materials, creating a South American wildlife wonderland will be cinch. Both the animals and scenery types are included in the paid DLC, set to release for £7.99 on 7th April.

Alongside the paid DLC, a free update will also hit Planet Zoo. In addition to new foliage and enrichment items; and various bug fixes and tweaks, this update adds research sharing between franchise zoos, new difficulty options and a "Genealogy tab", allowing players to trace their animal's family tree back through the generations.

This update and the paid DLC will launch side-by-side on 7th April for Planet Zoo on Steam. The South America Pack will cost £7.99.