Remedy’s latest supernatural shooter Control just released a couple of weeks ago, and already the developer has announced extra new downloadable content for the game, including both free and paid content.

The first of these updates is a photo mode for the game. Given Control’s striking visual style - both in its use of colour and in its environmental design - a photo mode is a perfect fit for the game. It arrives this fall, free for all players.

The second update is another free piece of content called Expeditions. This is essentially a kind of challenge mode for players who have reached the end-game, providing players with an influx of some of the toughest encounters in the game. Expeditions are also set to release in fall.

The last two pieces of content are paid expansions, set to release sometime in 2020. These expansions are titled The Foundation and AWE. The former focuses on the history of The Oldest House, the main location of the game, with the latter focussing on a new area of The Oldest House titled the Investigations Sector.

Control is available now on Xbox One, PlayStation 4 and PC. 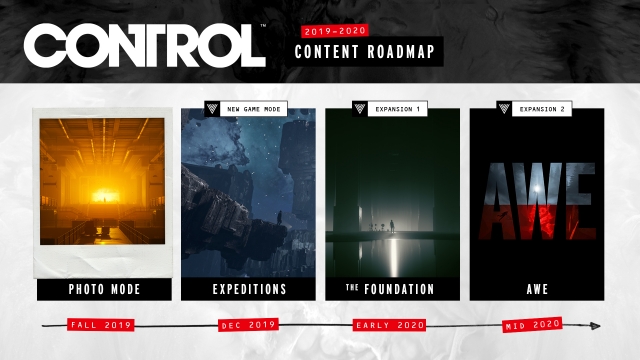