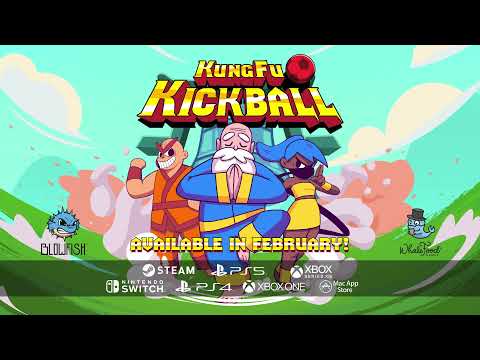 KungFu Kickball Scores a Release Across All Platforms

From developer WhaleFood Games and publisher Blowfish studios comes the team-based platform fighter KungFu Kickball. It’ll be kicking off the new year with an official release on on the 10th of February, with full cross play enabled on PlayStation 5, Xbox Series X|S, Nintendo Switch, PlayStation 4, Xbox One, along with PC and Mac via Steam and the Mac App Store.

Dash into battle and take part in some of the most aggressive games of Kickball you’ve ever played! Mix some high speed sport with some high intensity martial Arts and you’ve got yourself KungFu Kickball. You can train with five masters of the martial arts to hone your skills and unlock unique fighting styles to turn the tide in the arena. The simple but intuitive three-button control scheme allows players to strike, block, and headbutt their way to victory. The simple control scheme means that the sky's the limit for players, first-time players can put up a good fight against KungFu Kickball veterans and have a great time doing it! But don’t think the control scheme means that this is an easy game to master, players must come up with offensive and defensive strategies to counter their opponents if they wish to come out on top when the last ball is kicked.

Co-founder of Blowfish Studios, Ben Lee had this to say about their new game:

“KungFu Kickball is right around the corner, ready to bring its seamless cross play action to platform fighter fans across all platforms next month!”
“Our team has put tons of effort into ensuring that the pick-up-and-play accessibility was an enjoyable experience for casual and competitive players everywhere. So let’s kick it in February!”.