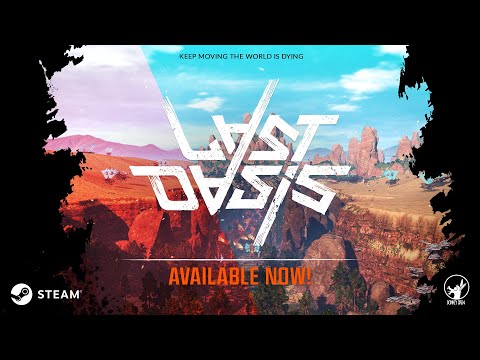 Donkey Crew's open world survival MMO, Last Oasis, is out now on Steam Early Access. In support of the global social distancing efforts, the game is launching at a 17% discount and the studio is urging players to "#staythefuckhome". Take a look at the launch trailer above.

The survivors of Last Oasis' distant-future world are forced into a nomadic lifestyle. With the moon destroyed in a cataclysmic event, Earth has stopped spinning on its axis, leaving half the earth frozen and the other half sun-scorched. As a result of the planet's orbit around the Sun, however, these halves are constantly shifting, with only a small, ever-moving strip of land remaining hospitable. It's this strip that humanity must chase in order to survive. Split into various conflicting clans, humanity fights over dwindling resources and works to keep Flotilla, the last—also nomadic—city, on the move.

Scavenging, crafting, exploring, trading and fighting are a daily part of life in Last Oasis. Players will take part in a player-driven economy to ensure their own survival and that of their clan. Combat is given a significant focus too, with a deep melee system and various pieces of weaponry to choose from on the player-piloted Walkers—huge wooden land-vehicles used to traverse tough terrain.