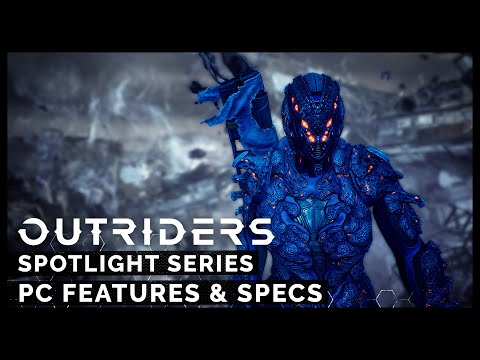 People Can Fly have recently unveiled the PC specifications for its upcoming co-op third-person shooter Outriders. Wondering if your PC is up to the task of running the game when it releases on the 1st April 2021? Wonder no more. You can get the scoop on the video above or read on to find out. 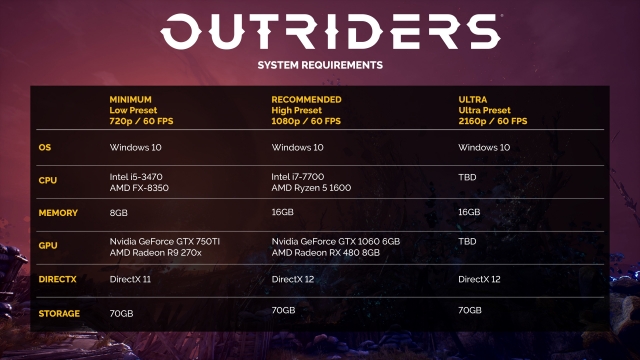 As you can see, you won't need an Earth-shatteringly powerful PC to get Outriders running on lower-end hardware. If you want to make use of the ultra widescreen features and more demanding graphical options, though, you might want to pick up something a little on the beefier side.

In addition, People Can Fly confirmed that players will be able to use "most first-party controllers" with the game. It cites "Steam, Xbox and PS4" as examples of compatible controllers, although makes no mention of the PlayStation 5's DualSense. Keyboard and mouse players will also be able to remap their key configuration at will.

Language support is another topic the studio touched upon in the video, confirming fully-voiced audio for the following languages:

Other languages, such as Korean, Simplified Chinese, Traditional Chinese and Japanese are supported via interface translation and subtitles only.

Want to go without a mini-map, ammo indicator or health bar? No problem! People Can Fly proudly showed off a fully customisable user interface in the recent PC showcase.

Platform barriers grow weaker and weaker by the day (hooray!). In the spirit of this news, People Can Fly made sure to reconfirm that Outriders players can play with one another no matter which platform they pick up the game on: PlayStation 5, PlayStation 4, Xbox Series X|S, Xbox One, Stadia or PC (via Steam or the Epic Games Store).

Outriders releases on the 1st April 2021 for PlayStation 5, PlayStation 4, Xbox Series X|S, Xbox One and PC (via Steam or the Epic Games Store). A Stadia version of the game is set to release later in 2021.

The GrinCast Episode 285 - I Feel Ashamed