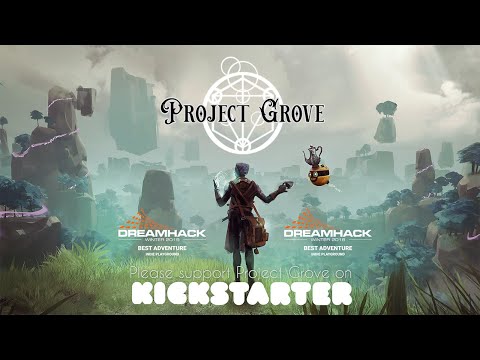 Project Grove, the debut project from Antler Studios, launched its Kickstarter campaign on 28th January. The PC exclusive, open world puzzle-platformer aims to combine the wonder of exploration with dynamic gameplay systems and a dry sense of British humour. The campaign will last until the 29th February, if the funding goal of £29,200 hasn't been reached by then, the studio will receive no funding from the campaign.

Originally the studio's dissertation at Brunel University London where it won the 'Best Games Design and Development' award, the project went on to receive start-up funding as a 'Tranzfuser' finalist. Check out the trailer above to get an idea of what the studio's efforts up to this point have produced.

Players will control Edric, an alchemist, and his robot companion L-P1N as they travel from their plague-ridden home planet to the mysterious 'Dacrima' on a quest to find a cure for terrifying plague. In legends, Dacrima is the land from which magic originated, it's this belief that might hold the key to eradicating the plague once and for all.

As well as a companion, L-P1N is the tool which Edric uses to navigate the treacherous open environment of Dacrima and solve the puzzles it contains. Unlike most linear puzzle games, challenges can be approached in any order depending on the abilities Edric has encountered.

Various species of wildlife and fauna can be harvested and examined to produce potions in a dynamic brewing system that grants players unique abilities. These will aid in the solving of puzzles and the exploration of Dacrima's world.

Dacrima looks to bring a personality-rich, dynamic twist to the puzzle-platformer genre. Those interested in learning more, backing the project and accessing a demo can find all the relevant information on Antler Studio's Kickstarter Page.

Project Grove is planned for release on PC in August 2020.