During the OG Unwrapped digital showcase we got a first look at Star Trek Prodigy: Supernova, a game based on the Nickelodeon cartoon.

After the crew of the U.S.S. Protostar make first contact with a new alien species, they discover that they have to escape before the local star goes supernova. It's up to Dal R’El and Gwyndala to save their friends, and stop a deadly new enemy. Dal uses twin phasers and Gwyn uses her blade to defeat enemies, and they have to use other equipment such as tricorders to solve puzzles.

The game can be played solo or in couch co-op with another person as the pair battle against robot armies, hostile environments, and solve puzzles across three planets.  It features the voices of all of the main characters from the show; Hologram Janeway, Jankom Pog, Rok-Tahk, Zero, and Murf, and the story was written by the show's creators
Dan Hageman & Kevin Hageman.

GameGrin was told at a preview screening of the trailer that the game is set "about a quarter of the way into the first season" of Star Trek: Prodigy, and had the full backing of Paramount

I have personally enjoyed the TV show, This could be a nice casual game for me

I'll play anything with Kate Mulgrew in it.

I loved her at the Captain 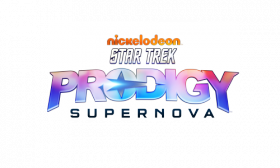