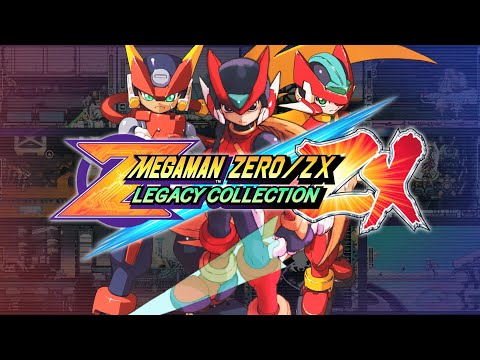 The Mega Man Zero/ZX Legacy Collection is out now, combining the four Mega Man Zero games, Mega Man ZX and ZX Advent in one package. Previously, these six titles were only available on handhelds, but now, they've been upscaled and reworked for PlayStation 4, Xbox One, Switch and PC.

While these platforming action titles are known for their brutal difficulty, concessions have been made for players who may be new to the series or after a more forgiving experience: the optional 'Casual Scenario' mode reduces the difficulty further than the originals allowed. In addition, save points have been added mid-mission to make failure, and the resulting level restarts, less of a punishing factor.

'Z Chaser' mode presents something of a contrast to the 'Casual Scenario' mode: a series of time-attack challenges with scenarios specifically plucked from the main game. Playing through these will have players' times entered onto online leaderboards. These challenges can also be tackled via local co-op.

As well as more gameplay options, Mega Man Zero/ZX Legacy Collection offers a host of graphical settings too. While players can play with the original handheld sprites, resolutions and screen layouts, higher quality versions are available to be selected. Anyone without nostalgic attachment to the fuzzier graphics will want to consider these 'HD Smoothing' options.

Finally, in line with the other Legacy Collections offered by Capcom, the game offers an extensive 'Gallery' mode. This compiles hundreds of pieces of artwork and musical compositions from the games' development: a treasure trove of media for die-hard Mega Man fans.

Mega Man Zero/ZX Legacy Collection is out now for Xbox One, PlayStation 4, PC and Nintendo Switch.

A Mega Man Zero/ZX Collection Coming to Consoles and PC