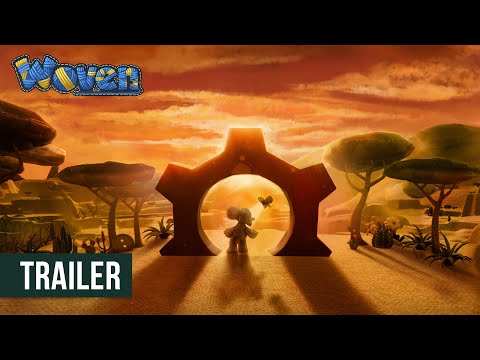 Alterego Games' upcoming title, Woven, aims to provide the "ultimate chill-out-on-the-couch adventure game". Players take on the role of Stuffy, a customisable, patchwork  stuffed elephant who's as well-meaning as they are clumsy.

Stuffy awakens in their familiar woollen world to find the entire stuffed population has vanished, replaced by nasty and dangerous machines. Aided by Glitch, a non-evil metal firefly, the two of them must journey through trials, hazards and enemies spread across the vibrant, handcrafted world. Will they solve the mysteries of their predicament? Can they return all the other stuffed creatures to their rightful home?

Players will need to swap Stuffy's elephant body parts for those of other animals to succeed in saving the day. Elephant legs may be strong, but they don't stand a chance at jumping as high as rabbit legs; look for animal blueprints to customise Stuffy. As players explore the obstacle-filled world, they're encouraged to keep their eyes peeled for secrets and collectibles. After all, this is a 3D platformer at heart, with all the trappings that made the genre a hit with players of all ages.

The game's personality is reinforced by its narrator, a charmingly grumpy individual who recounts your journey 100% in rhyme.