101 Ways to Die isn’t a particularly subtle game. Right from the outset, you know there’s going to be a lot of death and from the first stage, it’s very obvious that it’s going to be somewhat outlandish. It’s the latest brainchild of indie developer Four Door Lemon, known for their catalogue of mobile and PS Vita Games such as Quizquizquiz and Table Mini Golf. This, their first game to be released on Steam, is a physics-based puzzler with a very dark sense of humour.

It’s something like an inverted version of Lemmings. You are playing as assistant to Professor Splatunfuder, your run-of-the-mill mad scientist. He has a slightly different take on his mad science though; he’s trying to create a compendium of death methods. With your help, he hopes to reach the full 101. You do this by killing “splats”: mindless zombie-like creatures that run aimlessly forwards until they hit an obstacle or walk into a wall. A certain number will be released at the start of each level and they will make a break for the exit immediately. You have to stop them reaching the exit by placing obstacles in their way that will destroy them.

The game plays out in a manner similar to a lot of puzzle games at the moment: levels are self-contained, and you are awarded a certain number of stars for completion. The more stars you accrue, the more levels you unlock. This is where the game gets interesting. Completing a level by killing the required number of splats will only net you one of the possible three stars on each level. The others are obtained by killing the splats in interesting and creative ways. For example, you could bounce a splat into some spikes and kill him, but you’ll get much more satisfaction if you bounce him into a wind tunnel that throws him into the path of a harpoon gun that pins him to a wall mounted landmine. You can see how sadistic this gets quickly. 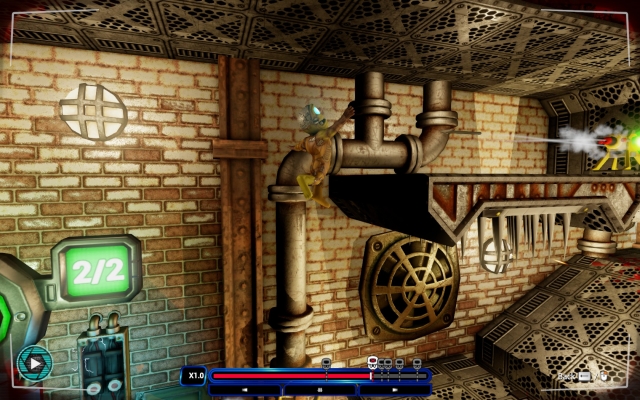 The preview build that I played was very polished already, with tonnes of puzzles and concepts already finished, so I got to see quite a lot of how the finished title will work. The final title will have at least enough levels to create 101 different death combinations, but an exact number isn’t yet finalised. At the time of writing I’ve sunk a good 8 hours into the game and still only on the second collection of levels so you should be able to expect your money’s worth with this game.

101 Ways to Die is nothing to write home about from the point of view of audio. There’s a few sound effects at the moment and a couple of jolly background tunes, but it’s not a soundtrack that’s going to stick with you like the aforementioned Lemmings managed to. This may simply be low on the list of priorities at this stage though and it’s not a deal-breaker.

The visual style is very befitting of the style of the game itself. It’s quite over the top and cartoon-like. There’s a lot going on too, with animated backgrounds and scenery adding to the feel of being in the middle of a mad scientist’s lab. The only trouble I found with this is that along the way, I sometimes had to check if something was a trap or simply part of the scenery. There’s a “plotting” mode that lets you do just that though. How this works is the background becomes translucent and you can see just the traps and how they are interconnected. It’s sort of a blueprint-type view that gives you more of an idea of exactly what’s happening.

This is a game that’s shaping up to be something of a time sink. There’s a certain cathartic pleasure in getting unlikely combos with your splats. Never mind the Stanford Prison Experiment, this game quickly proves that mankind is evil! I defy anyone to play this and not start looking for the most horrific and cruel ways of extinguishing the splats within very short period of time. It seems to unlock a sadistic sense of schadenfreude in otherwise pleasant and non-violent people. The game is set for a Q2 2016 release on Steam, although pricing and platforms have yet to be confirmed. You can keep up to date with development on the game’s official website, and of course we will have plenty more details for you here at GameGrin, including a full review once the game reaches its finished state. So far though, it’s looking like Four Door Lemon could be onto something good with their PC debut.