City-building games have been around for nearly 25 years now and have formed a decisive niche in the gaming community. These titles are loved by many and completely misunderstood by many more. Until recently, I was one of those people that simply didn’t feel the appeal of these games. For me, I couldn’t wrap my head around the sheer number of responsibilities the player would have to keep up with to simply keep the game going. Beyond this, I never figured any sort of ‘end-goal’ for these seemingly never-ending experiences was possible. All this changed for me after I played Aven Colony. Now I won’t swear that this is the be-all end-all city-building experience or anything, but it was good enough to make me reconsider trying more of games like it. I’ll explain it like this: Aven Colony took every aspect I disliked with the genre and made me love them instead of loathe them.

How did it do this? Simple. By streamlining the experience, making it easier to understand what is wrong and giving the player the tools to fix it in a timely fashion. This may not seem like anything new to those of you that know how your favorite city-building game works and exactly how to handle situations when they arrive. But for those of us who haven’t played these games as much, trying to figure out what every available number means or how to deal with their increase/decrease can be quite a daunting task. Aven Colony addresses this by using a deceptively simple system to organise these figures and giving the player multiple ways to find them, sort them, and compare them. One of the best examples I can think of has to be morale. Morale is simply the happiness of your colonists and their willingness to work the jobs you provide them. This needs to be kept high but can drop if even one problem gets too out of hand. These problems range from simple things like having enough food and water to survive to more complex issues such as having an unintuitive commute to work. 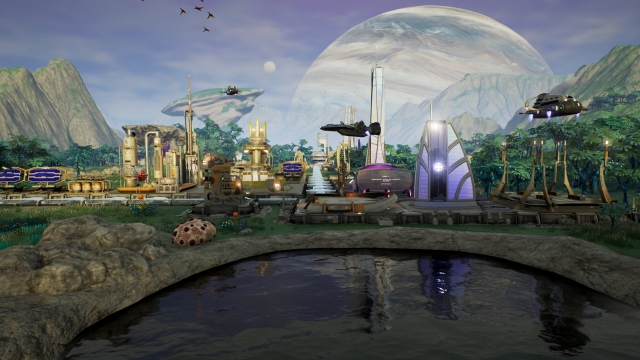 Keeping up with something like this sounds like it would be difficult when in fact, it can be found as a meter in the handy bar at the bottom of the screen or within the many pages of statistics that can be accessed from a panel on the left. This is the simple part in ‘deceptively simple’, as these numbers and statistics are easy to find (thus making the solution less tedious to puzzle out), although morale doesn’t just affect the population as a whole. While the overall morale can be seen as a meter at any time, it doesn’t show how each individual colonist feels. This is where the deceptive part of ‘deceptively simple’ comes into play. Aven Colony is designed in such a way that the more difficult you make it, the more you have to focus on individual sections of your colony (if not individual colonists at times). This sort of clever design is what makes this game such an interesting case.

Let's get to the meat and potatoes of the title though: city-building. Put (criminally) simply, the goal of any Aven Colony session is to build a colony that functions well enough to either meet a certain mission requirement or to keep going until the player gets tired of it. This is done by using construction drones to build whatever structures are necessary to keep the colony happy and productive. These structures could be anything from solar panels or geothermal generators to provide electricity, farms or greenhouses to provide food, or even just tunnels to connect everything. Every structure serves a purpose and each one requires different resources to get the most out of them. Some simply need to be upgraded all the way while others have to be fully staffed to provide their full rewards.

Luckily, building these structures is as simple as pulling up a wheel, selecting the type of building, picking which you want, and finally placing that structure on the map. Again, this is the easy part as the more complex thing to keep in mind is that certain buildings can hurt your air quality while others don’t need to be staffed once they’re built. Not to mention that if colonists have to walk through any other building to get to their job, they will be upset. It’s these little details that make designing the colony so fun. Being careful not to upset any part of the delicate balance while also knowing that making most mistakes can be corrected fairly easily. 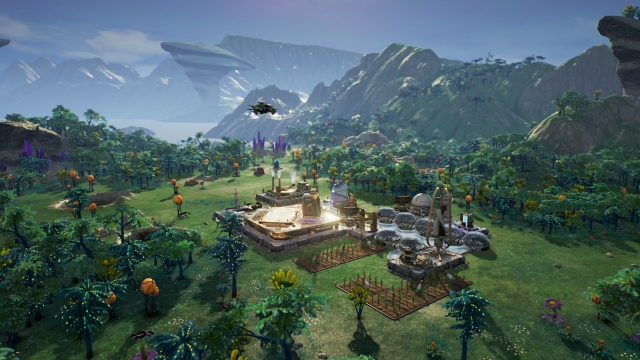 While I would love to go into great detail about all the different types of structures and how each and every one works, I have been informed I shouldn’t make my preview the length of a term paper. What I can say is that most types have several different buildings that serve the same purpose in slightly different ways or with varying efficiency. I think this is brilliant because it gives players the option to tackle issues in different ways if they choose to. This does bring up one of my only gripes though. While the tutorial missions (Holo-Sim 1 and 2) do a decent enough job walking players through the basics, the objectives that push the campaign missions along are where most of the truly important information hides. My problem with this is that these objectives force the player to build specific buildings. This wouldn’t be an issue if these were always the best building for the job. Being forced to build an obsolete structure to complete an objective is simply frustrating.

Besides this little hang up, these objectives do a great job of keeping the player focused on the overall goal of each of the game’s eleven missions. These missions all take place on different planets and are strung together by an overarching narrative that gives reason to the creation of each colony. Besides bringing the story from the previous missions, each new mission also has its own unique victory conditions and challenge to overcome. For example, the first real mission takes it slow, easing the player into the full responsibilities of running a colony. Victory conditions are simply to construct a particular building and run the colony for an additional cycle. The main challenges to overcome are learning the biggest mistakes new players will make, such as making commute hell for every colonist or letting crime run rampant. This is drastically different from the next mission, which introduces resource scarcity and expeditions.

This mission takes place on Sandy Gulch, a desert planet with many holes burrowed through its surface. Being primarily desert, farm land and water sources can be problematic and force the player to extend their colony ever further just to get bare necessities. The various holes that dot the map also make getting to resources difficult as no structure can be built over them or even too close to them. The nice thing is that if any one mission is giving you trouble due to the map, you can always use Aven Colony’s Sandbox Mode to try any of the campaign maps. I only spent time in Sandy Gulch, where I learned to deal with spreading out my colony without making it harder to maintain. I also found that the various ways to change the Sandbox scenarios made for some interesting situations. Realistically, by changing these settings, a player could find themselves playing Aven Colony simply for this mode since each session could be different. 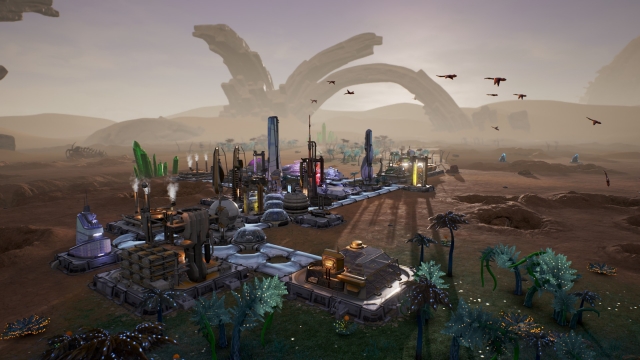 I have to admit that one downside to the Sandbox Mode is that it feels a lot lonelier than Campaign Mode since the fully-voiced characters only make tiny appearances and don’t carry any sort of narrative. This is a shame since the voice acting is surprisingly good and does a great deal towards making the characters feel real. I was pleased to find that this level of care was used to put impressive detail in each structure you can build. Unfortunately, I’m no music buff, so I couldn’t tell you whether or not the background music is as beautiful, but I can say I never grew tired of it. In fact, I noticed that the music was changing often enough that I barely realised it was playing sometimes as it simply fit the mood so well. Whether everything was calm and things were nice or it was the middle of winter and a shard storm was bombarding my colony, I always felt like I was hearing exactly what I should be.

My satisfaction extends to the environmental sounds as well. Since several things around the various maps make noise, I was worried that at least one would have some obnoxious sound effect or something. Even the selection noises feel perfect when compared to other games that are heavily based around clicking options and what not. I didn’t even experience many framerate dips or anything when I had nearly one thousand colonists and tons of buildings. While all of that is nice and all, I have to say the thing I am happiest about is how the menus you have to check and use all the time are as non-intrusive as possible, clinging to the edges of the screen.

I think I’ve made it perfectly clear at this point that I could talk about this game all day. I loved every minute of Aven Colony and couldn’t name more than a gripe or two about my time with it. I will definitely be playing it more in the future and can wholeheartedly recommend it to anyone that enjoys city-building games. Look out for this gem on Xbox One when it releases on 25th July.

This review touches me in places my girlfriend won't.

While I can't make any promises, I will say I heard the preview really enjoyed your company too.

I think Demon comment just won on here, how come there is no "Thumbs up" for comments GameGrin!!!! I want to give Demon a thumbs up!!!!

Up where is the question though?

Hopefully not anywhere the preview touched him.

Long time no hear Paul, we shared the Dungeon Siege trenches, say i love your vision and project, let me know if I can help, take care and best wishes.

Hey Darren. Thanks for checking out my Aven Colony Preview. I'm glad you seem to have enjoyed it.