Honestly, I didn’t know what to expect when I went to preview the upcoming strategy title from Nival (Etherlords, Prime World), Blitzkrieg 3. I think I had it stuck in my mind that this was going to be a real time strategy game, I’d enjoy it but it wasn’t something that would grasp me, much like 99% of other RTS games on the market. An hour flashed by in the shot of a gun and “one more go” syndrome had wrapped me in its greedy arms and wouldn't let me go.

Blitzkrieg 3 is both an RTS and a TBS (turn-based strategy), set in World War II, with an online multiplayer element. Whilst there was a hefty single-player campaign mentioned to me in the preview (which I’ll cover a bit later), the multiplayer was really where the game shone through, and where the vast majority of the time will be spent, I’d guess.

When you start playing the multiplayer side of the game, you will build up a base with the resources that you have, much like any other RTS. However, your base is then, defense wise, completely out of your hands. You can go out and attack other players’ bases and attempt to steal their resources (in aid of further developing your own), or you can simply log off. Either way, other players will attack your base and the AI will defend it, sticking to the parameters that you set up. Let me give you an example. Due to time restrictions at the event, I was provided with an already crafted base. Being the pedantic piece of crap I am, I decided to move literally every offensive and defensive unit around because I know so much better than the developers of the game. I then used a feature that allows you to test out your own base, before letting other players attempt to destroy it.

What I learned very quickly was that the development team were, indeed, much better at building bases than me. The other thing that I learned was that, no matter how I setup the base, I was never going to breach it because I’m terrible at strategy games. Instead, I let one of the producers have a quick go at breaching and within three minutes my ego had been destroyed along with all my military-based future plans.

After this complete embarrassment, the development team showed me a bit more about the base builder and explained certain things that I had taken for granted. One such bit of advice was that you can use your offensive units (infantry, tanks etc.) to defend your base whilst you’re away, and you can set them to obey a selection of orders. For instance, unless I tell the tank in my base not to move, it will chase the enemy and it will get destroyed. 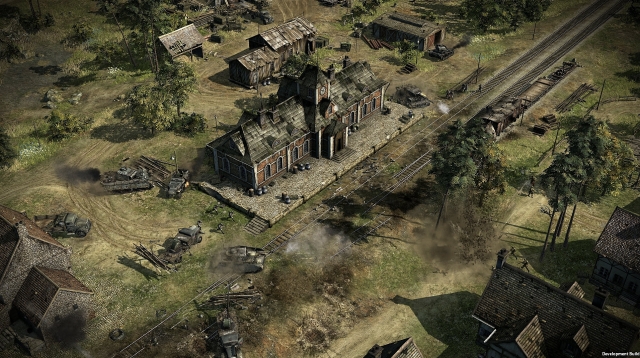 You also really need to think like your opponent. I had set up a huge amount of defenses on one entrance to my base, and completely neglected there was a bridge about 50 feet from where they spawn in that lead straight into the heart of my precious resources.

The key to getting good at Blitzkrieg 3 seems to be playing with yourself (no, not like that). Every time you install a new defensive structure on your base, you’re going to want to test it, and test it, and test it. If you can breach your defenses and “steal” your resources, so can any Tom, Dick or Harry that decides to wander in from the big, scary internet.

For those of you are looking for the tactical edge by throwing your wallet at the game, you’ll be slightly disappointed. There is a premium mode available for purchase, should you so desire, but all this does is speed up the game a bit. Instead of waiting 60 minutes for an event to happen, or a unit to finish building, it will happen in 10 (for example). Because of the nature of the game, you may find yourself jumping in-and-out of it fairly regularly, so this premium membership is really there to just help those who are either impatient, or short on time. 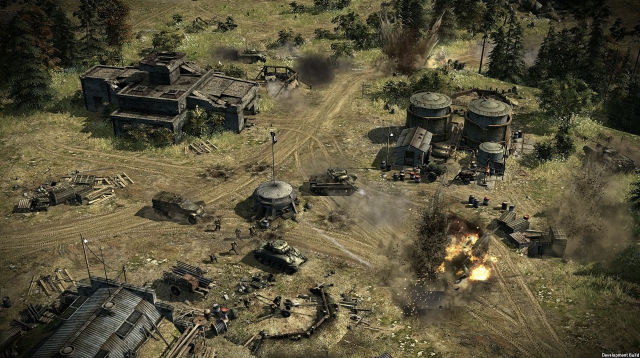 I mentioned earlier about the single-player campaign. This is another way to give yourself an edge over your opponents. With the game you will receive three story campaigns (one Allied, one Axis, one USSR) - each contain six missions and each mission lasts approximately 30 minutes to an hour. By completing the campaigns, you will receive slight upgrades in the game in the form of ‘Commanders’. These Commanders may have specialities in say, Heavy Tanks. This will, in turn, make your Heavy Tank units marginally better. If you are willing to dedicate the time to completing the campaign missions, you are rewarded as such in the multiplayer portion.

Blitzkrieg 3 is definitely a title that I will be keeping an eye on in the coming months, and expect to see me fruitlessly defending my base come February when the closed beta launches. If you enjoy war games, real-time strategies, turn-based strategies, or simply blowing shit up, you’re going to want to check out Blitzkrieg 3.

Win Blitzkrieg 3 with our Caption Contest