The big issue with games in Early Access is you never really know how early that access is. Playing BMX: The Game, I get the impression that it’s being launched in a very early alpha build as it’s currently completely unfinished. Taking influence from early Tony Hawk and maybe more likely Dave Mirra games, BMX: The Game is an ambitious but boring waste of half an hour in its current state and shouldn’t be on store shelves, yet.

First things first, there’s no mouse and keyboard support for BMX, so you will need a controller of some kind to play. There’s very little to actually play in BMX: The Game right now though. There are four maps for you to ride around in and do a handful of tricks. These maps range from the tiny bike tunnel to an impressive replica of the city of Barcelona, though all are empty with very little to actually do. Taking cues from the Skate franchise, BMX: The Game allows you to pull off the very small amount of stunts by merely flicking the right analogue stick in a direction. It’s not particularly responsive, the tricks and jumps take a few seconds to register which can cause you to fling yourself into the scenery and occasionally get trapped there. 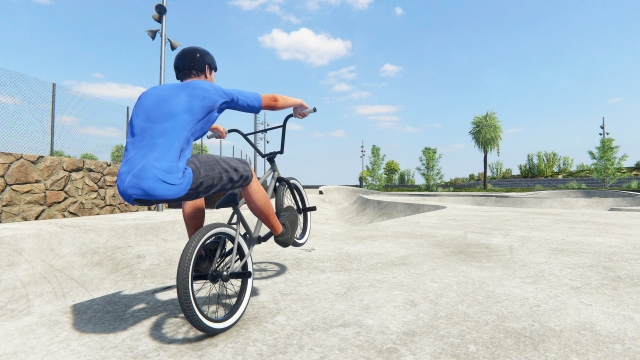 While the gameplay itself is far from stellar there are a few other options to get your teeth stuck into. First thing I jumped into was the character creation. You can customise your body type, and though others are in development, not all of the body types currently on offer actually work. When changing my body types and clothing options, my hat ended up clipping through my head, a weird cloth pattern protruding through instead. There aren’t very many clothing options available yet either. While there is an option to change your accessories there aren’t any in the game yet so your only choices are to change the colour of your t-shirt and shorts. The bike customisation is a bit better, providing the option to customise every individual part, however this also only goes down to colour. None of these parts have any impact on the game whatsoever so going into this much detail is unnecessary. You can make every bit of your bike a different colour if you want so there’s that I guess.

The best things on offer here are the park builder and replay modes though. There is an option to build your own practise area or download other players. Setting up your own park is tricky as the controls don’t respond as precisely as I would like, however you can spend plenty of time here tweaking the perfect place to ride. Once you’ve done that you can play around with the replay feature, showing off your string of tricks to the world. This feature is surprisingly in depth with options for lenses and aperture, there’s plenty there to sink your teeth into. Unfortunately, just like the park builder, the controls in replay mode are confusing and don’t act how I would like them to. 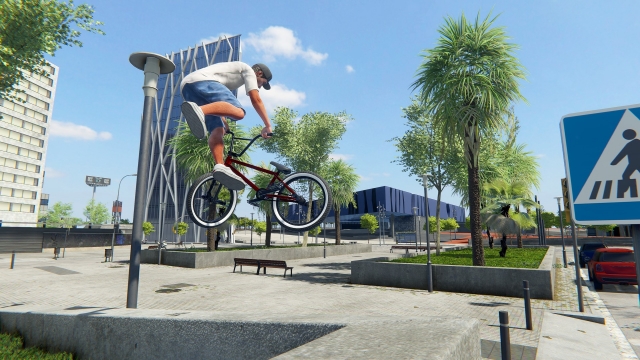 BMX: The Game is in Early Access so while I’m not expecting wonders in the presentation, it kicks the curb there too. The visuals are fine, though slightly blurry and reminiscent of late PlayStation 2 games but the real issue is the almost entire lack of audio. There are audio cues for when you stop cycling and when you land or hit a rail but other than that the game is entirely silent. One of the biggest things that brought people back to these early sports-action titles was the soundtrack. I’m not expecting BMX to have a massive track list of licensed music but something would be nice, whether it’s free to use music or something sourced from local artists but there’s nothing there.

At this point in development I have real issues with BMX: The Game but there’s plenty of ambition and potential for it to go further too. It’s way too early to tell which way it will go but at its best BMX: The Game could focus on its culture and give us a taste of Barcelona’s BMX scene. Tweaking the mechanics and injecting the game with some flavour could really make BMX an interesting title. As it stands, BMX: The Game is a £20 slice of biking bread with no butter and a really niche audience. Probably worth staying away from until the full game is out if you just want to play a fun BMX game.

Major Update for BMX The Game