This delightful little 2.5D demo, to be released on Steam at a later date, is brought to you by the Canadian studio, WildArts. Players control Loaf, a walking, talking… loaf... of bread, followed closely by his companion Lint. They embark on a quest to solve the mystery of two nifty thieves who, quite boldly, run off with stolen goods to the Forest of Roots. You begin by exploring and interacting with different creatures and humanoids, picking up several quests along the way. The expedition leader also offers lore about the ‘Woodland War’ and ancient ruins dotted about the world. Loaf is a pretty bland character with little context from the offset (and the dialogue comes through Lint mostly) but he is interesting to play as. He is “very squishy”, for starters, as described by his furry friend. Players can flatten him using machines to gain air-time and float to reach platforms and ledges, otherwise too far for a regular jump. 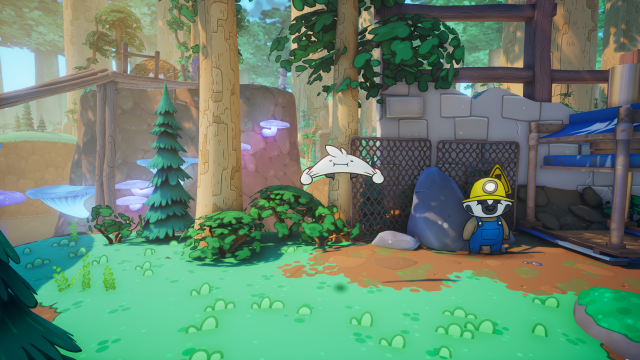 Not a revolutionary mechanic, but this, as well as everything else in the gameplay, is dressed well in this adorable adventure, filled with typical RPG questing and turn-based fighting.

Battling is okay. The cards used to determine your actions are quite stale, at first. But admittedly, it continues to grow on me. It is very much the same formula as the JRPGs of old, attack, defend, item, flee, and options for special attacks when you unlock them, any of which players must choose via a card. Different characters possess different traits or actions to use, providing a nice feel of progression and development. Defending requires patience and repetition. Once you grasp the timing of an enemy’s strike, it is relatively easy. Attacking is even easier, with a green section representing the timing of your interactions for a successful hit. You have a backpack to store and change equipment, you can use food to regain health, and once all enemies are defeated you will accumulate experience as well as clovers - the in-game currency. 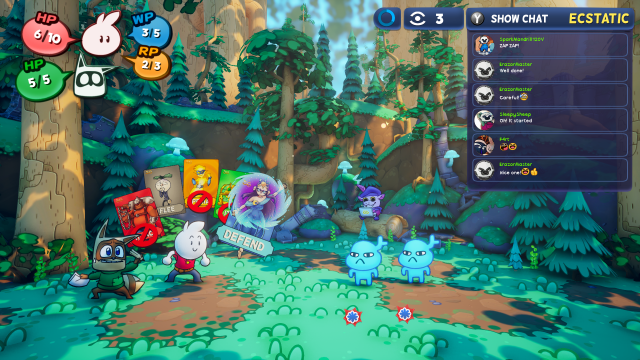 The crowd please meter on the right-hand side of the screen is an addition that still makes me chuckle. It displays comments based on how well you perform in the fight. Take a few hits, or mess up your attacks consecutively, and the comments become about as toxic as they can in such a light-hearted world! If you enjoy the colourful environments of Born of Bread and exploring while taking in a good deal of dialogue, the battling will probably suffice. Numerous enemies have different attack timings to defend against meaning you do need to pay attention when stumbling upon something new.

Continuing from an autosave did force me to seek out the quest givers on one occasion - a minor issue in my experience. The well thought out level design meant I could quickly hop up a couple of well-placed rocks, jump a fence, right to the quest giver, then the butterflies hoisted my starchy gut back over to where I needed to be. Easy peasy. I can see this being a problem, however, if the distance is greater or more awkward to navigate in the full release. I also noticed that my clovers had been reset to zero, and I had to equip my boons before setting out. Again, early stages for me in this instance, so not too punishing. Here’s hoping players won’t be massively penalised in the future if, for example, their hardware crashes and they have every intention of picking it up where they left off. I will reiterate, this is not something I have seen since this instance, additionally, I have only seen one other issue in the game so far that halted my progression. WildArts also has a link on Twitter for players to report any issues so far that they may be addressed before the final release.

So far, the soundtrack is incredibly charming and couples very well with the game's simplicity. The ‘Outskirts’ area, in which players begin the game, is accompanied by a mischievous melody, fitting nicely with the two rascals stealing the goods in the opening of the game, and this really sets the tone. Every change in area plays its own music that suits the player’s current whereabouts. Entering the Badger Cave, for example, changes to something slightly more ominous, and the NPC inside the cave entrance warns of horrid enemies further in. The enemies truly aren’t all that bad but the dark and dingy cave, the bats, the weird-looking mini-golems, all resonate with what you can hear. Plus, a completely naked HUD means you can fully appreciate the wonderful colour palette. That, right there, is where this game lands on its feet. Everything about the player's experience fits together like a completed jigsaw, even before its complete development. You can tell WildArts, who, may I add, consist of only two individuals, have put a great deal of care into the game. 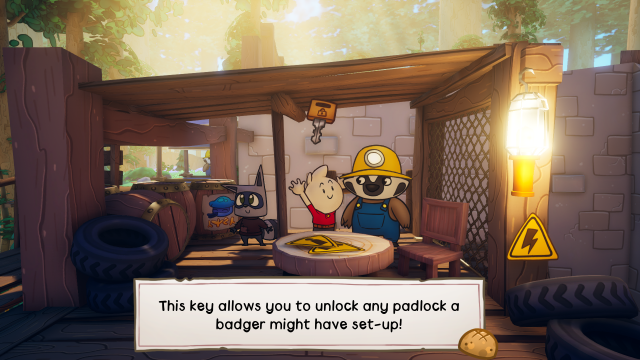 Humour is not always the easiest thing to write and yet, Born of Bread delivers what I would call the crème de la crème of ‘dad jokes’. This will undoubtedly be a case of ‘marmite’; you will either love it or hate it, but for me, I welcome it with open arms and a very wide grin. Some of the speech bubbles to deliver these one-liners are just pop-ups in the background of what is being said to Loaf and Lint.

The developer is aiming to deliver something inspired that will put a smile on the player’s face. I look forward to seeing the full and vibrant world, on Steam, when WildArts are good and ready. For now, stay informed on the developer’s Twitter feed and access the demo here.