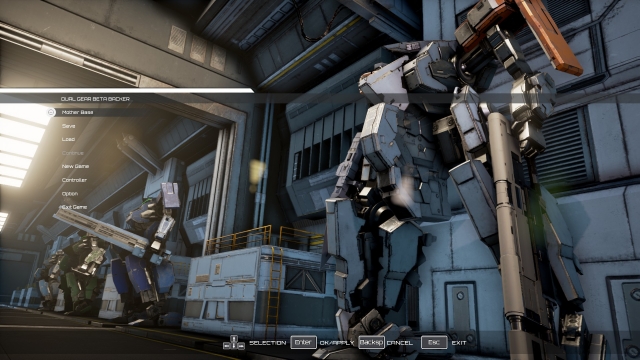 DUAL GEAR starts you on a menu overlooking a mech in what looks like a hangar. When you start, you’re thrust into a tutorial on an aircraft carrier where you’re taught the mechanics of the game. DUAL GEAR’s starting enemies consist largely of dropped-in turrets and, eventually, enemy mechas wanting to bust your lights out. The gameplay loop is a unique one, in that enemies can actually attack you mid-turn if you’re not careful or wait too long. You’re also given large freedom of movement for a turn-based game, and this leads to some awesome situations where you’re dodging bullets and missiles with your thrusters mid-turn. However, enemies cannot move whilst you’re moving, so there is a limit to their counter-attacks. In addition, your movement and actions are limited by a gauge (as well as ammunition) and you can only move a certain amount before you run out of gauge. The same can be said for your weapons.

After this tutorial, you’re given a long scrolling text of dates and events that chronicle DUAL GEAR’s story and origins, the name “DUAL GEAR” being derived from the type of reactor used in the mechs your characters pilot. I must confess, this intro is definitely a point of concern. Because DUAL GEAR is being developed by Orbital Speed Studio, which is a small company in Thailand, it is likely that it might not have been able to afford good translators for the dialogue and story in the game. This itself is absolutely fine (I doubt most people were playing this game for the story anyway), but I feel that whilst this is the case, you should play to your advantages. The text-crawl at the start of the game is very overwhelming on its own (even were it not poorly translated I would still criticise it for this) and the janky translations just make it all the more hard to parse. However, this game is still early in its development cycle, and I don’t doubt that Orbital Speed has plans to improve in this area. As of right now, there are four main story missions to complete, and there is part of a story to experience in these four levels, albeit not very much right now. There is also a skirmish mode to toy around with, which might well keep you playing long after the story concludes. My main concern for the gameplay is that a lot of features seem locked at the moment. Things like cover, preparing your turn and whatnot are straight up inaccessible from what I could see, and this means that turns can sometimes feel monotonous and rather limited in what you can do past attack. There’s also some very odd choices when it comes to enemy placement, such as in Mission Three where an enemy is placed in a position that is almost completely impossible to hit with many weapons. The main strength I feel is the amount of customisation you can give to the mechs and character abilities, which I honestly feel I haven’t even scratched the surface of yet. There’s a lot of weapons and parts to buy and choose from and experimenting with some of them is definitely very fun. 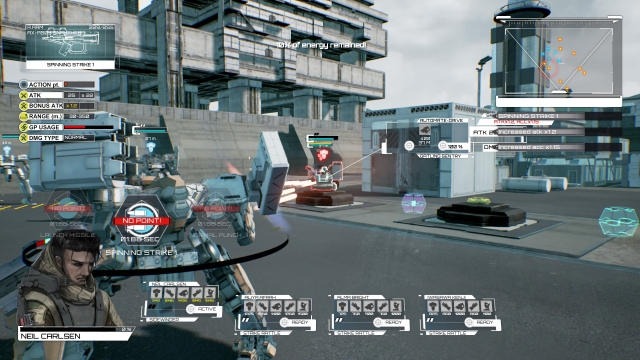 An aspect I very much liked about the game was the art direction. Whilst the mechas themselves are pretty par for the course (but still visually pleasing) I really like the style of the character portraits and UI. It almost reminds me of the original Metal Gear Solid in this way, and whilst the character archetypes aren’t all that unique, I think the style elevates their visual brand. The graphics aren’t amazing, nor are they an eyesore. They work for what the game is, and that’s really all I ask. The music has some basic but catchy beats to blast whilst you’re fighting enemies as well, though it’s definitely a game that works well with a podcast in the background if you prefer that. 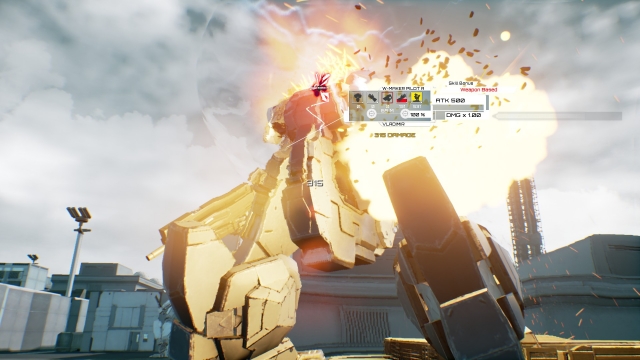 Thus far, DUAL GEAR has some interesting ideas and a decent skeleton to build off, and I look forward to seeing what Orbital Speed Studio has in store for the future. Keep an eye out if you’re into this kind of thing.