My eyes are always drawn towards games like Midnight Hub’s Lake Ridden on show floors. There’s nothing that peaks my interest more than a beautifully designed world full of story and mystery, and this game is positively dripping with them - quite literally. The area shown off publically takes place in a swamp, and tasks you with traipsing through the water to solve a supernatural puzzle.

Lake Ridden doesn’t shy away from its mystical inspirations, and throws you right into magical rituals. These almost play out like 90s adventure games, where you need to look at and interact with everything to solve the puzzle. The game tells you everything you need to know to solve the puzzles in the world, and has a hint system if you’re really bashing your head against a wall. This doesn’t mean the game holds your hand, and the puzzles can provide quite the challenge, but it doesn’t lock its later content behind mystical logic.

All of this is presented in an incredibly beautiful package. Midnight Hub have been working on this game for years and that time has been obviously well spent, with Lake Ridden sporting a cartoon-realistic artstyle where the colours are exaggerated slightly and the edges softened. The outside area at the start of the game features some of the most detailed plant life I have seen in a game, let alone a show demo. Add to this the hauntingly beautiful soundtrack, and Lake Ridden will trap you deep within its world. 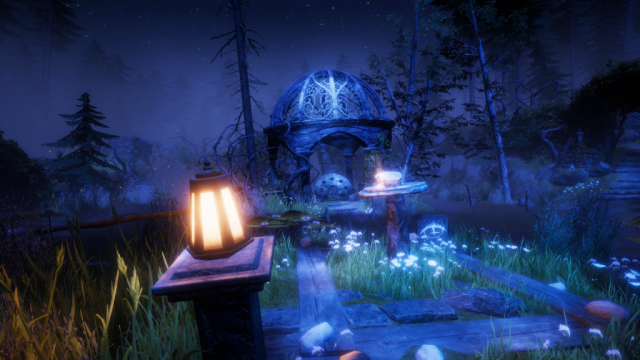 I got to enjoy a second section from later on in the game which was set in the attic of a house. This second section carried through everything I loved about the main demo, bringing the difficult puzzles that were built into a lovingly crafted world. Where the outside was cold, wet and dark, the inside had a certain warmth to it, particularly near the candle light. Where the outside puzzles were magical in nature, the inside puzzles felt more practical and realistic. But the two experiences felt closely linked, despite their differences, and I attribute this to the world building that Midnight Hub have achieved.

Lake Ridden is set to release in May 2018 on Steam.