Do you love it when a plan comes together? Then you should not join your friends for a game of Embr, because your plans are worth NOTHING in the eyes of a blazing inferno collapsing around your ears whilst people die on the toilet!

Ahem… Muse Games, the developer behind Embr, had an idea. Ridesharing, but the ride is a firefighter, and the share is saving your life from the warm embrace of fire. You, obviously, take on the role of said freelance firefighter - a Respondr - who is heading to various addresses that are currently on fire, with an amount of people trapped inside. Well, not trapped per se, more ‘not escaping because they’re on their phone’ for the most part… 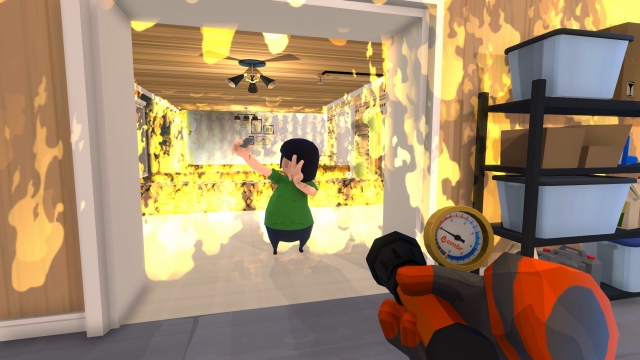 This is not fine

Embr is basically a first person shooter, but the enemy is your environment, and to overcome this, it gives you access to a variety of useful gadgets. Your firehose, of course, which you can usually refill from sinks. An axe for breaking doors, windows and furniture. A ladder for climbing up or down. And more that you have to buy using your profits from saving people, such as a bounce pad, a water grenade and a grappling hook. Oh, and you have to buy the ladder, too. But it’s okay, because you can put Corsair RGB on your axe!

Your objective is usually to rescue a certain amount of people by picking them up and putting them inside the mattress-filled safe zone. You can also get bonus cash by rescuing their possessions, which means returning them to the safe zone. The less morally scrupulous amongst you will be glad to learn that your car has a section in the rear that can store things. Things you didn’t arrive with. Such as lamps, teddy bears, computers and wide screen televisions. Hint hint. 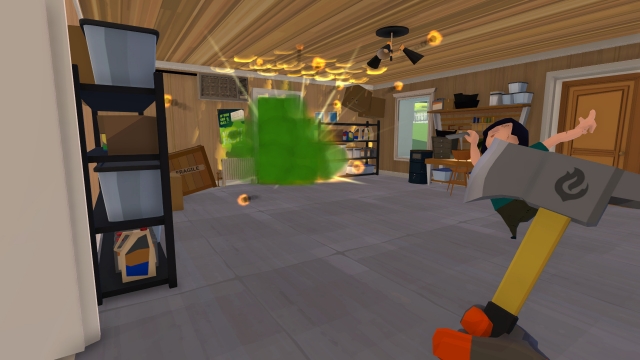 What did you have to eat!?

It’s a good way to earn some quick money, but seems to count against your flame rating. So whilst stealing that bundle of cash will get you $100, returning it will unlock more levels. You’re expected to replay levels, so I liked earning money for better gear and equipment faster. Especially since your profit is eaten into by service and processing fees - that 15% can completely negate your tip!

Embr will not make it easy for you to do your job. That’s not a slight against the game, again you’re supposed to replay levels to get money to upgrade your equipment. For instance, you can’t put out grease fires until you have a chemical extinguisher, which will make things easier the next time you play that level. Each time you complete a level, either successfully or not, you’re awarded a number of flames depending on… well I’m not entirely certain what it’s dependent upon. Obviously, more flames is a better rating, and as you’re awarded more flames you unlock new places to save.

Don’t worry, it’s not all save, all the time, because there are a few puzzle levels. Using knowledge you’ve gained (not always been told) through the other stages, you will have to escape a burning building. They’re fun, and give the game a bit of a story to it. 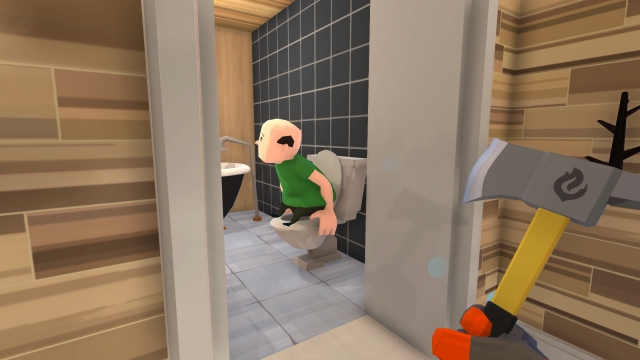 Finish and get outta here!

As you play you will unlock special missions, known as Embr Prime missions, which have a few different objectives. Find and rescue a special item, save everyone with as little fire damage as possible, and rescue as much stuff as possible. Honestly, that last one is my favourite. You don’t even have to get the stuff to the safe zone, you can just hoik it out the window until the place is empty and move on to the next room.

Of course, as I mentioned right at the start, you can play with your friends in a group of up to four. Or random people, that’s an option too! Well, after playing solo a couple of times you’d be thinking, as I did, that it couldn’t be too hard with multiple people. I mean, you got that one fire remarkably under control, didn’t you? Well the fire scoffs at you, laughing as it engulfs everyone and everything mercilessly! Because the more people you add to your team, the more fire there is, and the more people there are.

Yes, in hindsight it should have been obvious, but going from one person to four was a shock to the system. The fire is barely manageable while you’re all fighting it - if you split up then things escalate so fast! But if you don’t split up, other rooms will become death traps and start killing customers. So, if one of you has a penchant for grabbing the TVs first, they might need a gentle reminder to leave that until after the humans are safe. Not pointing any fingers… 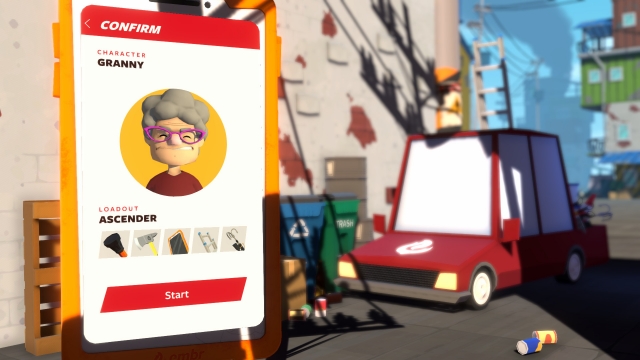 The UI has changed from this

The build which I played only has the first district, which actually pleases me. If the whole game was just the first district I’d be a bit disappointed, though it did take me seven hours to complete them all - not at full flame rating, however. But knowing there is more coming has me excited for how this progresses through Early Access.

I’ve really enjoyed my time with Embr, and I’m definitely looking forward to it being updated throughout Early Access. Check it out if you like co-op physics-based games, though you can also definitely play it solo if you choose. It’s probably a bit less crazy, that way…