Feudal Alloy is a metroidvania-style action RPG in which you play as a medieval robot controlled by a fish. As of right now the feature list boasts a dynamic action-combat system with swords, grenades, dodges and other special attack moves, a lot of different equipment that change both player appearance and attributes, and a huge interconnected world to explore, filled with wide range of enemies, bosses and side quests, etc. Going into this game I was very intrigued with the uniqueness of the title and its grand list of features filled with promises of an excellent adventure. Unfortunately I was met with what I would definitely call a tech demo with some very barebone features rather than an early alpha. However, what I did get to play through definitely showed potential.
You play as a fish-controlled medieval robot that must smash its way through a variety of mechanical enemies. To do this you must collect scraps from slain enemies and create new pieces of armor and weaponry for your fish controlled robot to use. After collecting various parts of my enemies I went to craft some new gear. To my dismay most of the customisation and craftables still weren’t available yet. Contrary to the lack of content, what I did see looked promising. 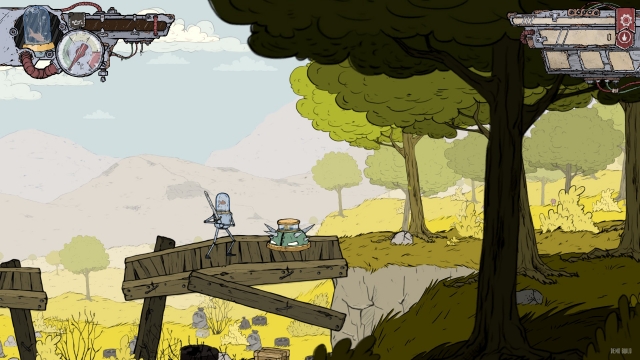 So far the game seems like it will create a rich world with some unique steampunk looking enemies to fight, however it’s way too early to tell what direction the game is heading in. I managed to beat what was available in about 30-40 minutes but what I saw was fairly promising. The combat is exactly what a metroidvania style game needs: It’s simple and straightforward. Each type of enemy has its own unique attacks and method of being defeated, so choosing when to dive in and attack is key. Unfortunately because of how short the demo was there’s not a whole lot to say about Feudal Alloy, but I can definitely say it has me intrigued and I look forward to seeing where they go with the game. As of right now the game is not available on Steam for pre-purchase or to get into the alpha, which is a smart move as the game is nowhere near ready for early access support. The devs over at Attu Games certainly have a unique title on their hands and only time will tell if all their promises come to fruition, however what I played was actually a surprisingly fun and unique action-RPG.