Life must be tough for developer Obsidian. Being known exclusively for multi dozen-hour RPGs and epic strategy titles doesn’t leave much room for ‘downtime’ in the release lineup. You know, a smaller-scale title that’s a little less intensive on development resources. Cue Grounded, the latest—and smallest, on multiple fronts—title ever to come from the studio. This micro-sized survival adventure has just been released on Early Access for Xbox One and Windows (being a Microsoft Studios game, it’s available on Game Pass too), and I played through the opening hours. Even in its pre-release state, there’s a lot to like about Grounded, but make no mistake: it’s still very much a game in-development… and it shows.

Right at the top, it feels important to establish that this isn’t an Obsidian game as you may have come to expect. There are distinct signs of Obsidian’s unique touch—most notably in the game’s interactive conversations and collectible voice logs—but as far as the central gameplay is concerned, this is a survival game very much in the vein of Rust or Minecraft. That means you’ll be harvesting resources, hunting, scavenging, crafting, fighting and building the biggest, baddest base you can. Most of these systems work fine, with base building itself being the one—somewhat clumsy—exception. Even with that considered, the central gameplay mechanics of Grounded are passable. If you’re into this genre of game (and you probably already know if you are), there’s nothing here that’ll likely scare you away. On the other hand, if you’re here purely for that ‘Obsidian’ experience then be warned: this is a survival game first, and a story to discover second (at least in this preview state). 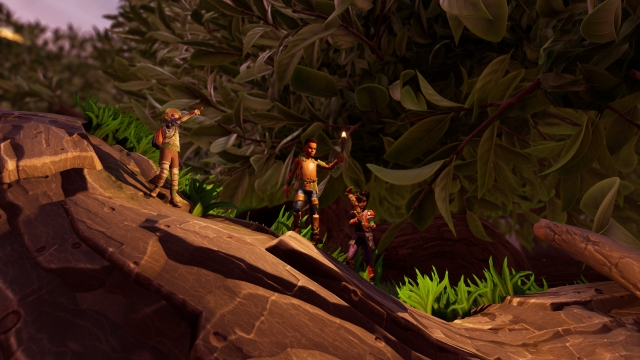 The most notable distinction between this game and others in the base-building survival genre is the core conceit of ‘kids shrunk down to the size of bugs’. It’s essentially Honey I Shrunk the Kids—if you and your friends were the kids. Sure, it’s a gimmick, but gimmicks can be an effective tool if used right. In Grounded, exploring a back garden like it’s a vast, treacherous wilderness is genuinely exciting. Ants the size of large dogs scurry back and forth; blades of grass appear as trees and serve the same predictable in-game purpose (to be chopped down for materials); and—charmingly—waypoint distances are marked in “CM”, not “M”.

For some players, being shrunk down to the size of a Tic Tac won't be a whimsical adventure, it'll be an outright horror show. Those players, you may have guessed, are arachnophobes. Spiders are, shall we say, a little bit on the aggressive side in Grounded—think Deathclaws from Fallout if they had eight legs and had an innate ability to lay traps. There's a much-needed “Arachnophobia Safe Mode”, but it doesn’t make spiders any less of a formidable foe, only less physically imposing (dare we say, almost cute).

There’s a real sense of personality too, with four unique playable characters boasting their own in-game quips and responses to various sights and sounds. The beginnings of an interesting little story can be found in this preview state, backing up the personality with something more substantial to propel the player along. Plot details are few and far between this early in development, but mysterious rumblings surrounding scientists, wacky inventions and burger-flipping robots create a promising first impression.

The real 'stone in the shoe' with Grounded's initial offering comes from the lack of story content. Obviously it's an unfinished product, and so this isn't really a criticism, more a statement of fact. That fact, however, still stands: Grounded only teases its story in this current state. If it were a movie, the credits would roll before the opening scene had finished—that's how abruptly the story content ends. 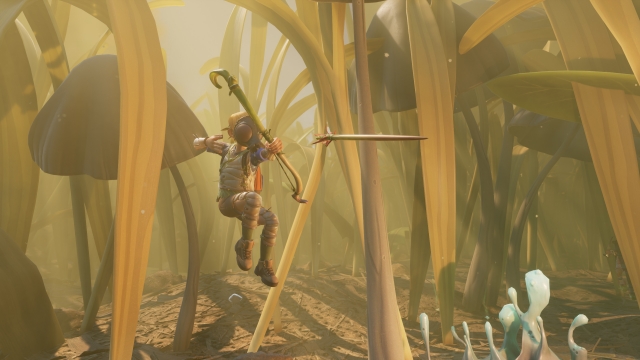 Oh, and as if it even needed saying: this early access survival game has bugs (and not just the creepy-crawly kind). Nothing especially egregious from my experience, mainly dialogue not triggering, but it was enough to mark the game as well and truly a 'work-in-progress'.

Still, I'm intrigued by what Grounded has shown so far, and will certainly be checking out the game with each subsequent update. If you're a Game Pass subscriber, I heartily recommend you give this a shot—you've got nothing but bandwidth to lose!

I've been playing some as well and I agree with a lot of what you're saying. It's great fun with friends, and while content is lacking and bugs (of both kind) can be annoying, I'm interested to see how it evolves from this!