In the far future, humankind is using resources at an alarming rate. To curtail this, corporations have set up people in orbit of Earth to reclaim said materials from spaceships. No, they’re not snagging ships as they try to dock at space stations - the owners no longer require them for whatever reason. Your job in Hardspace: Shipbreaker is to disassemble them piece-by-piece, and be rewarded thousands of credits. Which will be used to pay off your massive, massive debt.

While it’s true that Lynx Corporation needs you to carry out this job, it’s not something that just anyone can do. You have to apply, of course, but there is a certain psychological profile, physical build and all that. When you’re hired, you’re sent a shuttle to take you into orbit to your very own habitation. So your ride, and now rent are owed to Lynx. Then you have to pay for equipment rental, bay lease, utilities, debt interest, and long story short you owe one credit shy of a billion credits. But it’s fine, you’ll make it back easily one 15 minute shift at a time! After all, an entirely disassembled spacecraft (out of the three currently available types) can be worth over 20 million credits! So long as you did a good job and put everything in the correct bins…

Hardspace: Shipbreaker’s challenge comes in the form of managing to take the things apart while sorting everything correctly. Your heads-up display tells you where to put each bit you grab, so you know whether it needs incinerating in the furnace, reclaiming in the processor or saving in the barge.

If it’s an item - like chairs, computers, cargo - it goes to the barge. The barge has the dual purpose of containing anything that might explode, such as a reactor. Common materials - mainly aluminium - or anything you damage too much needs to be incinerated. The ship’s hull plates go in the processor. 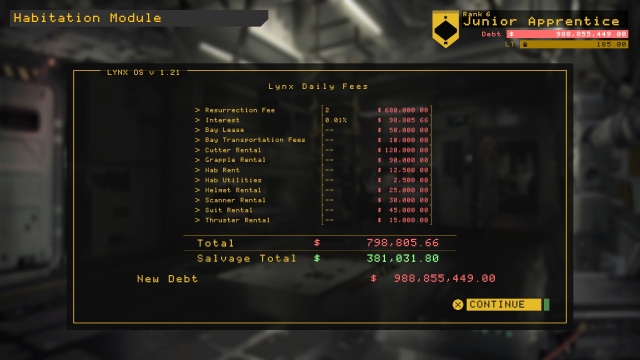 That’s just a good rule of thumb, you should definitely check the HUD before tossing the wrong thing in the incinerator, because if it goes in the wrong place you’re not awarded any credits for it. Similarly, if you throw it and it doesn’t reach the right bin.

Your main task in Hardspace: Shipbreaker is to complete work orders. Collect X amount of metal, mechanical devices, etc, etc. I assume that the more difficult ships you unlock later on in development will have other things. Completing work orders gives you points used for upgrades, and helps unlock your certification to get better upgrades.

You’re given a cutting laser and a grapple to aid you in your job. Both are upgradeable, once you finish enough work orders, and have various functions. The grapple’s main use is to move objects, and unmoor them from whatever they’re attached to. Then you can use it to push objects away from you - ideally aiming them towards one of the bins first. The final function it has are tethers, which allow you to string things together and move them much more easily. 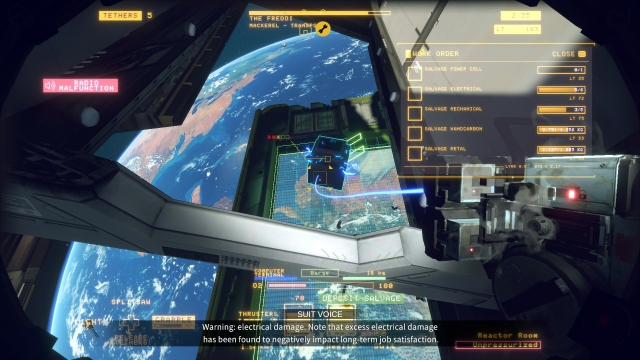 The cutter can be used to destroy certain materials, ideal for pinpoint accuracy, as well as cut a line through something such as a metal wall. It can be rotated 90o so that you can cut a square in something if you really want. You’ll want to mind the cutting line, though, as using it to cut a hull mooring and accidentally catching a canister of coolant is not a good thing.

You may have seen some of Hardspace: Shipbreaker’s trailers, which show the player being engulfed in flames or battered by debris. That’s because these spaceships were recently in use - they’re still powered up and pressurised. So if you cut a hull mooring whilst inside the ship, said pressure will try to exit and, well… have you ever seen Alien: Resurrection? In a game where everything can be cut into bite-sized pieces (do not attempt to eat the ship), explosive decompression is messy. You can depressurise the ship, however, but it’s not always that simple…

You will be cloned when you die (not if), so that’s not a major issue. However, the value of the ship parts will be decreased, and you’ll probably lose the logs that you can find in some ships. These can be decoded in your habitation, fleshing out the world of Hardspace in the form of audio files, diary entries and things like that. You may find some that can play as soon as you find them, but for the most part you’ll have to wait until the end of your shift to check them. 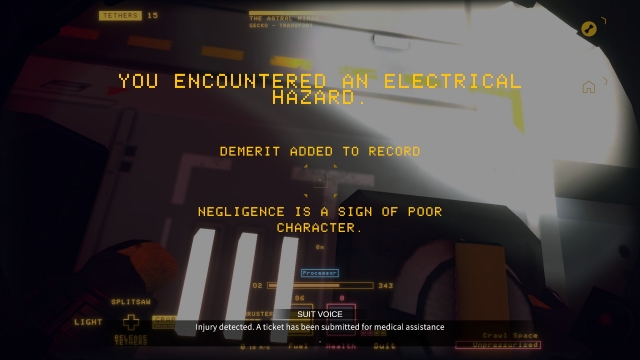 The use of sound is, ironically, fantastic in Hardspace: Shipbreaker. The music has a Firefly-inspired twang, and it gets more urgent if you’re in danger. It will also change if you’re inside a pressurised ship, sounding bassier. It’s quite dynamic, and if you’re holding onto a part of the intact ship you will hear the thrum of the reactor. Though if you get electrocuted, your radio goes mad for about a minute, playing something entirely different. Then there’s the voice of Lynx Corporation, warning you when you’re putting company profits at risk. Whether it’s through negligently tossing things in the wrong bin, stupidly using your cutter or risking the life of an employee, she’s always there to tell you off.

I have honestly been having a blast with Hardspace: Shipbreaker, and I plan on enjoying it more as it goes through Early Access. I can’t wait to get more ships, and yet I can’t get enough of the two available in this Act 1. There is about 15 hours of campaign here, plus freeplay which gives you everything fully upgraded. I’m only 975,000,000 credits in the hole now, and eager to pay off the rest.