I know what you’re thinking: yet another battle royale game, and you may be right for feeling that way because the market for these games is getting quite saturated. For me, I enjoy seeing all the different takes on the genre, even if it can start to feel familiar, but Hyper Scape feels rather unique despite taking some similarities from those that came before (whether they were successful or not).

Hyper Scape is the new fast-paced battle royale (BR) game (currently in open beta) from Ubisoft Montreal that takes that BR formula we all have come to be accustomed to and turns it into an arena shooter similar to an Unreal Tournament game. Like Apex Legends, Hyper Scape is a squad of three, along with a solo mode, with about half a dozen in-game avatars to choose from which don’t change anything from the actual gameplay other than appearance and voice lines. There is no customisation for them other than the skins you unlock from levelling up the battle pass (which is free for now) along with weapons skins and sprays.

In Hyper Scape, there is no circle closing on you every few minutes. Instead, they use a feature seen from the – now shutdown – BR game Radical Heights ­­where they close off zones in the map. When a zone closes, all weapons, items and even buildings disappear leaving an empty area to see any other players that may still be in it. Hyper Scape’s end game is trying something new as well. Instead of just being the last one standing, there is another way to win: holding the crown. Once you hit around 10 squads left, the crown will spawn and if you and your team can hold that crown for 45 seconds then you’ll win the game. The catch is once you pick up the crown, your location is revealed to every other player remaining until the timer is up.

As you start a game of Hyper Scape, you are put in a lobby with 100 other people until the match begins, which takes a little longer than I would like especially when going from game to game. As the timer counts down to zero you are put into a pod-like ship and can fly to any destination you want or follow the ping one of your teammates has set. Unlike other BR games, you can choose to land anywhere on the map and aren’t restricted to what area the bus/plane is flying above since there isn’t one. 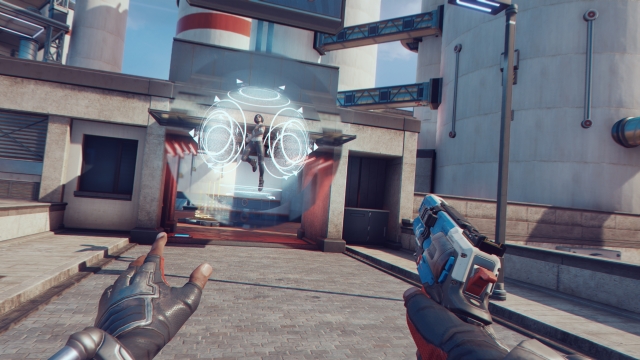 When getting close to the landing location the pod will open and you can glide down to one of the many-colored buildings with the gold windows, whack them with your melee weapon to enter and begin looting. There are a lot of interesting and unique guns in Hyper Scape which supports numerous playstyles and with each having its own distinct feeling. Grenade/plasma launchers, energy cannons, snipers, auto-locking pistols and – what seems to be the go-to for most players – the minigun are all useful in their own way. Every weapon in-game can be upgraded four times to increase magazine size and damage by picking up the same gun multiple times. For example, to fully upgrade my minigun I would have to find and pick up four of them on the map or loot one from an enemy that could already have been upgraded two or three times which would add to my own. The upgrade system also applies to Hyper Scape’s most distinguishing feature to separate it from other BR games: the hacks.

Hacks are essentially abilities you can find around the map (similar to how you find weapons) that can help you massively in tough situations. These hacks are my favorite part of Hyper Scape because it’s what makes it feel like an arena shooter compared to just another BR game. There are 10 hacks in the game as of right now and every single one is useful in its own way. There are defensive hacks such as heal, armor, a giant deployable wall and even turning yourself into a giant metal ball to bounce around in. Along with offensive hacks like teleport, a deployable mine, shockwave to send players flying or the fan-favorite slam. Slam by itself is a ton of fun to use as it sends you soaring into the air and drops you down with such force, it feels like you’re really causing some anarchy as you hit the ground. 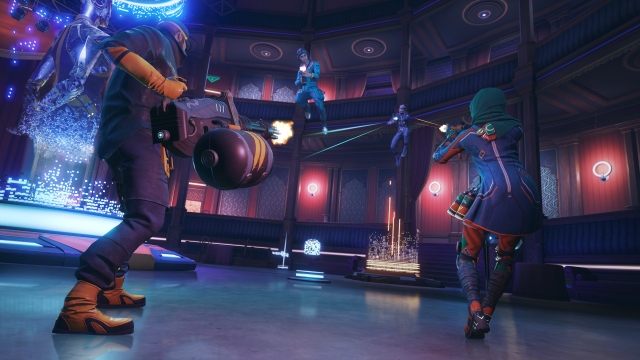 With all these elements combined, it makes for a pretty frantic experience and because of Hyper Scape’s take on Apex Legend’s respawn beacons, you’ll be jumping right into that action. When you die, you become an echo of sorts where the enemy can’t see you, but you can run around pinging enemies or loot, nothing more. The only way to bring your teammates back is to kill other players because once a player dies, their body becomes the respawn beacon. It’s a very interesting concept that just adds to the chaotic, fast-paced nature of the game and gives the people who died something to do which is always a good thing.

The final interesting thing that Hyper Scape does to differentiate itself is in its Twitch integration. There are a few in-game events that can happen at any moment which include: triple jump, low-gravity, infinite ammo, reveal, supply crates, and health kits. The way these events are chosen are by the audience of someone streaming on Twitch with the proper widget. Once the event pops up, the audience can vote from three options for which one they want to see. It’s unclear how it works if not a single person in the game is streaming though, but it’s assumed it will still be randomised.

Visually, Hyper Scape looks and runs great on high settings with almost no FPS drops which is impressive considering it’s a beta and how chaotic of a game it can be. The visual style isn’t anything unique, but it does match the whole sci-fi aesthetic they are going for despite all the districts feeling the same. Sound design is fantastic though with each weapon having its own distinct sounds so you know what the enemy is using just by listening, plus, the music for dropping and the menu are just as good and will probably get stuck in your head quickly. 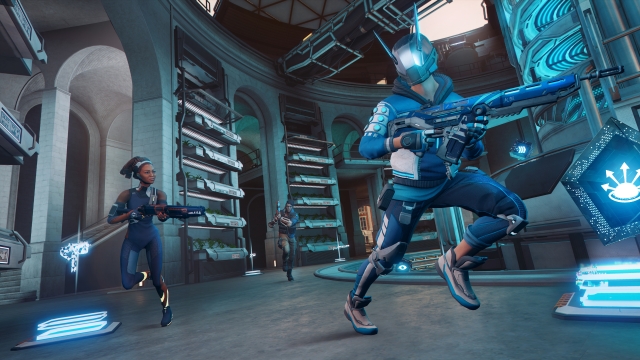 Hyper Scape’s fast-paced, arena shooter style may be a turn off for many because you’ll be dying a lot if you just jump in with no knowledge of hacks, weapons and events. But once you start to understand what works best for you, it can be one hell of a good time. It’s a fun take on the BR genre and I’m excited to see how far Ubisoft will support this game, but I hope they’re in it for the long haul because I like what I’m seeing.

Hyper Scape open beta is available for PC on Uplay with no release date announced.