Mount and Blade II: Bannerlord starts off with you having to create your own character, which is done by essentially creating their backstory as well as the way your character looks. The character creator itself isn’t very innovative but this is an Early Access game so there will likely be improvements to this at a later date. The main positive of the character creator is choosing where you came from and what has led to this moment in your life. You do this by choosing from a list of options that determine your in-game character stats. For example: when asked if I would run from a fight, lead men to do the fight for me or be a one man army, I chose to lead the men into the fight, which impacted my character’s leadership traits.

After creating your character, you have a choice: you can either go through a training camp that teaches you all of the basic combat, or go straight to the main game’s tutorial. The training camp teaches you things like swordplay, archery and mounting horses. This was actually quite entertaining for an hour or two as there were so many different weapons to use and learn different techniques with. 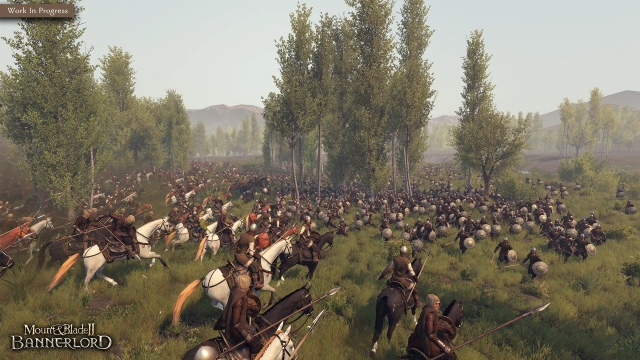 After completing the training camp you will be introduced to a tutorial, which has you doing a few quests but doesn’t take up much of your time. It took me about three to four hours to complete and so I thought of it as more of a prologue that introduces a few characters that may be important later in the story, as well as teaching you a few of the basic mechanics that will take up your time when playing M&BII. The downside to this is that while you are introduced to what seems like an important character, they just disappear after the tutorial and are never seen or heard from again. This may be due to Early Access but there were no signs to this as the place they went to is travelable in game, and I went there and was unable to spot the characters.

After completing the tutorial you are left to your own devices, where the game really spreads its wings and shows off the good stuff. Essentially your goal is to either join a kingdom that is already formed, or make your own kingdom from scratch, and that includes pillaging villages, raiding strongholds and gathering your own men to form a massive army as you attempt to take over the world.

There are a lot of mechanics to M&BII and all of them really tie together quite nicely. What will you be spending your time on in game you may ask? Well, as I have said previously, you will be trying to rule kingdoms and gain huge armies, and you can do this in a multitude of ways. The way I spent my time forming my kingdom was travelling around the map and helping towns that had quests for me to complete. After helping a local owner of the town he will reward you with coins as well as level up your experience with not only that Settlement, but the empire that they are a part of. They can also give you a few materials as rewards like sheep or cows so you can feed your hungry army.

There is a huge currency system in M&BII; it even has its own economy system, so you can gain coin in a number of ways. You can help local towns as mentioned above or you can start buying materials from one village and sell at another village or kingdom, purchase your very own trading caravans, and you can even own shops and factories like breweries. Coin allows you to buy supplies that you may need, it also allows you to upgrade any castles you own.

A huge amount of your time will also be spent commanding your armies on the battlefield, because you are the commander of your army and will need to really pay attention when fighting enemy troops. The combat controls weren't really intuitive for me, however this game is in Early Access and the commander style system does show a lot of potential and promise and is looking like it will be massively improved by the time the full game releases.

Mount and Blade II: Bannerlord is being developed and published by TaleWorlds Entertainment and is available now on PC via Steam Early Access.